Well… it is Fat Tuesday. Did you expect anything less from me?
I made these cupcakes Friday afternoon to have for dinner on Friday night. And they are simple – only one bowl necessary! I think I told four different people that I needed to handcuff myself so I wouldn’t eat them before our company arrived. It wouldn’t have mattered… I could have chewed through the metal to get to these.
I was craving a chocolate + peanut butter treat for dessert but as usual, wanted something different from what I already have made before. All I could think about was thick, creamy peanut butter buttercream frosting… 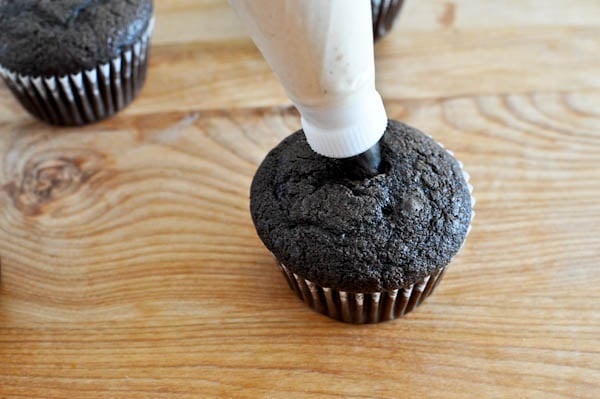 So I stuffed the cupcakes, which was really easy! I just poked a hole in the cupcake with the pastry tip and filled them. You can never have too much peanut butter. Especially if it’s enveloped by chocolate. I’m the kind of person that just likes a big blob of frosting on the top of a cupcake. No spreading needed.
But didn’t that cupcake look sort of naked? That’s what I thought too. Much better.
Some of this may be necessary. Preferably of the anything-but-skim variety.
Result? They were an absolute hit; my brother dubbed them the best dessert I have ever made. They probably are the best cupcake I’ve ever tasted, considering I don’t love cake. These cupcakes are so soft and fluffy and chocolaty, but not super sweet. They make a perfect base for the peanut butter buttercream, which is light and airy with just a hint of peanut butter – not overwhelming whatsoever. And the hot [dark] chocolate fudge adds that layer of decadence that takes them over the top.
There may have been a fight over the last one. In a bowl, whisk egg and sugar until smooth and no lumps remain. Add milk, cream, butter and vanilla, and mix until combined. Stir in sour cream. Sift dry ingredients together and add to wet mixture. Mix until batter is smooth, then swirl in fudge sauce. Line a muffin tin with liners and using a 1/4 cup measure, add batter to each cup. Bake for 15-18 minutes. Let cool before frosting.
Peanut Butter Buttercream

Cream butter and peanut butter together in the bowl of an electric mixer. Add powdered sugar with mixer on low speed and gradually add milk and vanilla extract. Mix until frosting is smooth. If too thick, add more milk; if too thin, add more sugar. Frost cupcakes as desired.
Dark Chocolate Fudge Sauce

Once it has reached the desired thickness, remove from heat and stir in butter and vanilla. Drizzle over cupcakes and store the rest of the sauce in the fridge for 1-2 weeks. In the wise words of Mr. How Sweet: these have protein, good fat, and a lot of antioxidants.

Therefore, they are a healthy snack. Win!