I just had a stunning revelation. 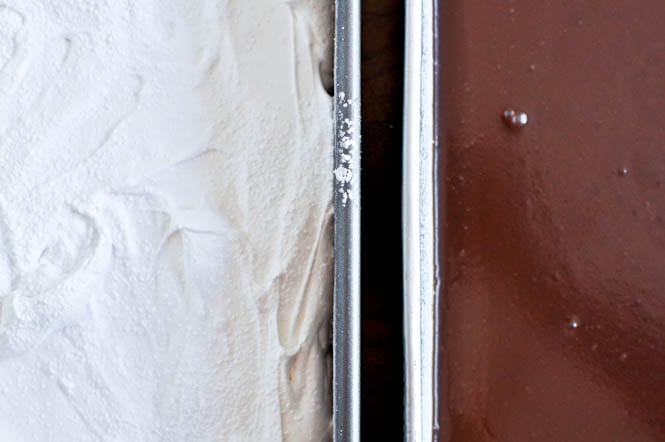 Literally, like five minutes ago. I am about to burst so I obviously have to tell you: s’mores are healthy.

Think about this. Ignore my insanity. Is this real life?

An actual s’more is the epitome of portion control. A semi-healthy “cracker” that is easily passed off for diet food any day of the week. A perfect ounce of chocolate, preferably dark and packed with antioxidants. A fluffy marshmallow that triples or quadruples in size and makes you feel like you’re eating more. Annnnnnnnd you cook it yourself.

See? Health food right there. It’s like you just ate three bunches of spinach and a a bushel of broccoli. Or in my case, a floret. Don’t you feel good about yourself?? 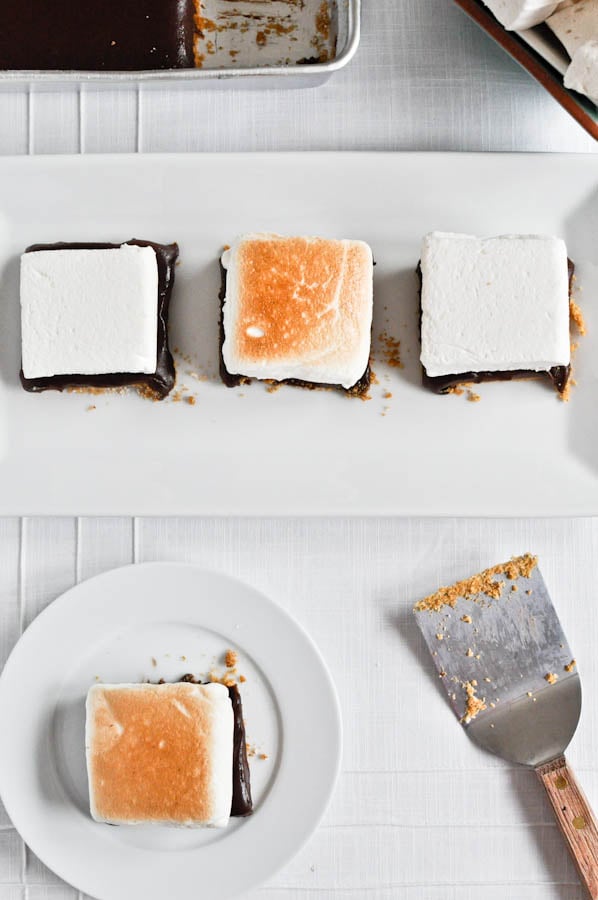 Too bad my s’mores are made with six ounces of chocolate and 45 marshmallows. Leave it to me to completely ruin a simply perfect s’more. I’ve taken every ounce of portion control out of the game. I’ve added extra sugar. I’ve added sticks of butter. I’ve even added extra LAYERS. I hope you still love me.

S’mores with marshmallows made of beer. What’s next? I hope s’more. 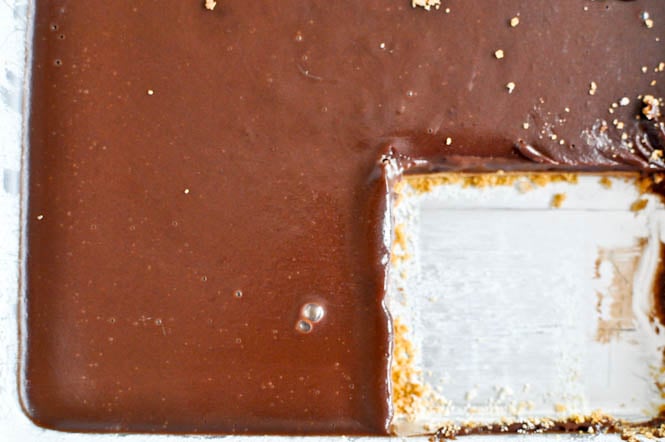 These can be bars or they can be a square of gooeyness that you eat with a fork. Or they can be a pan of dessert that you eat by yourself with a giant spoon while sitting on the couch and watching The Bachelorette. It’s up to you. I honestly just needed something to stuff under a marshmallow.

All that they contains is a quick graham crust, a chocolate ganache, and a pillow of homemade marshmallows – which if you haven’t noticed, is my new fixation. They are so incredibly easy to make. And I know you’re thinking that they can’t possibly be easy – but they are. The first time may be a bit stressful, but after that, you’ll have it down pat. And then you’ll want to make marshmallows every five seconds. And you’ll want to eat them with things. Like melted chocolate and a stick of butter. 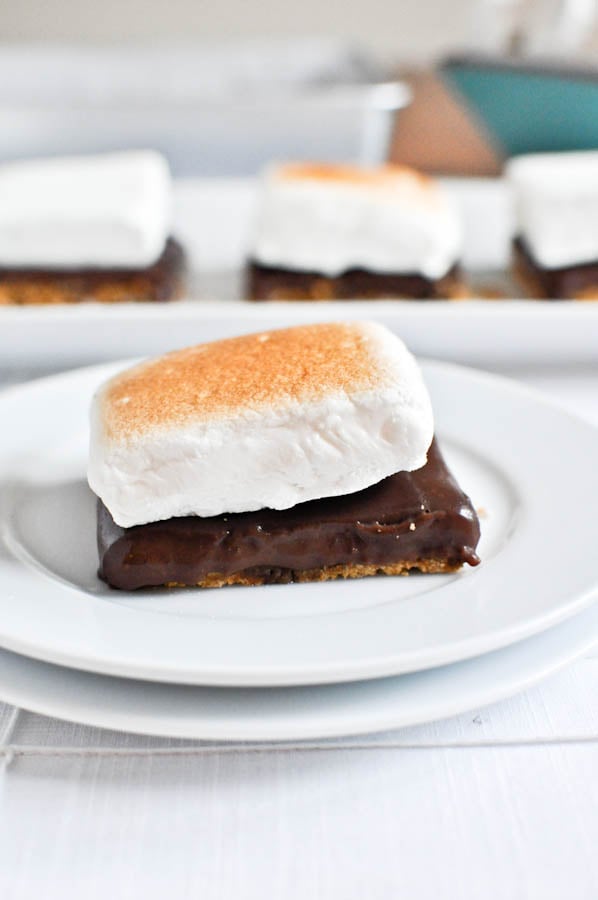 Eat them frozen or eat them refrigerated and gooey. I toasted the marshmallow on top of a few with a kitchen torch for effect, but it really doesn’t need toasted at all. I’m just a freak about toasting things.

And apparently a freak about s’mores. 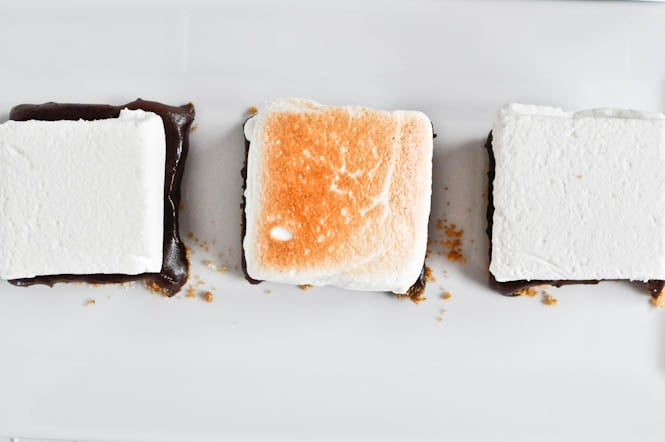 I used smitten kitchen’s homemade marshmallow recipe; the one I modified for the beer marshmallows.

Spray an 8×8 inch pan with nonstick spray, then add powdered sugar and shake to cover and coat the bottom. In a bowl, add melted butter and graham crumbs together and mix with a spoon until all of the crumbs are moistened. Press into the pan and set in the freezer while you make the middle layer.

To assemble the bars, cut marshmallows into desired size. You can cut and entire 8 x 8 square to fit over top, or you can cut squares like I did for separate bars. You can either refrigerate or freeze the crust and ganache – it is your preference. Freezing will result in an obvious almost frozen texture. Refrigerating will make for a “messier” bar that requires eating it with a fork. You can use a kitchen torch to toast the marshmallow or just leave them plain. I assume that you can also deviate from the “no-bake” bar and stick them under the broiler for a few minutes to toast. 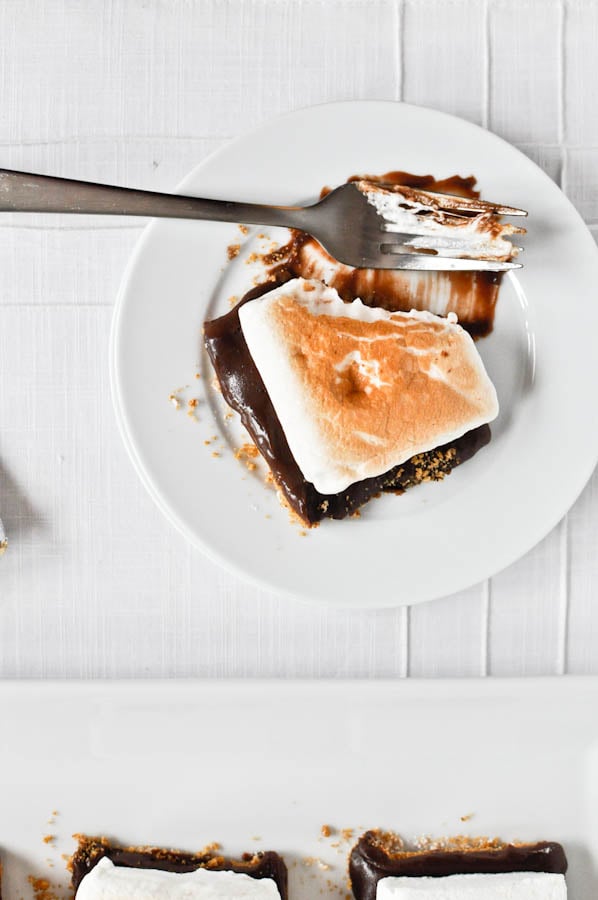 Now I have to go spend s’more time on the treadmill.