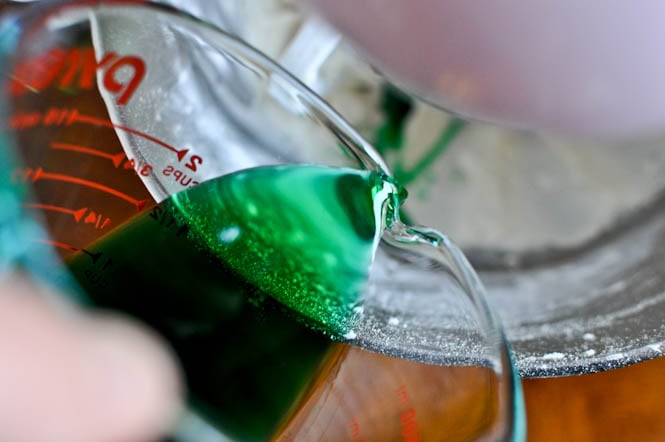 Okay… these exact ones are not really from 1988. At least I don’t think so. But I’m a little nutty. The closest I get to that is finding canned soup in my pantry that expired in 2002. Take it as you will.

This brownie comes straight from a yellowed index card out of my mom’s seemingly unorganized recipe box. She and my aunt made them incredibly often back in the day… at the height of shoulder pads, electric blue eyeshadow and women’s puffy corduroy dress shorts that came down to the knee and were worn with sheer tights. You know, the decades where B.U.M equipment sweatshirts, pogs, bubble necklaces and slouch socks went to die? Thankfully. Count your blessings. Over Labor Day weekend, these brownies came up amongst conversation and my eyes lit up. I hadn’t had them in years. And since then? Since that first week of September? Nearly 6 weeks ago? They are all I’ve been able to think about.

I need a life.

They are probably the sole reason I even considered mint chocolate chip donuts.

So I ran out and bought some creme de menthe, which was finally found at the third liquor store I ventured into after the first two associates, both creeping up on their 70s, stared blankly at me and yelled “Are ya sure ya don’t mean cream da mint?” You can find clear creme de menthe but what’s the fun in that? I know I particularly enjoy ingesting vibrant green artificial coloring… especially when sandwiched between two layers of fudge. Yum! I just had to make them green, for that was the only way I could really remember them and figured it was the perfect tribute to all the other artifically colored and flavored treats I absorbed as a tween. And I knew my mom would appreciate it, since we’re talking about the woman who makes a darn good argument convincing you that the *best* cranberry sauce comes straight from an Ocean Spray can. Another giant clue that these were the happening dessert at the end of last millennium, amidst Gushers, Pop Rocks and various layered frozen ice cream “casseroles?” The brownie recipe called for two full cups of Hershey’s chocolate syrup. I just couldn’t bring myself to do that, but it did conjure some fabulous memories of my brother Andy mixing tons of strawberry syrup into glasses of milk every single day until he was about 15. That makes me feel all warm and fuzzy inside and induces vomiting at the same time. Ga-ross!

My cousin and I dug into these a few nights ago after eating almost the entire pan of butternut squash lasagna. They were delicious, super rich, and had just the right amount of mint without being overpowering. But the thing is… they didn’t taste quite as good as they did in the 90s. I’m pretty sure you have to rock a side ponytail, a phat silk button down shirt, and air pump hightops and then they’ll taste 50 times better. In the bowl of an electric mixer, cream butter and sugar until fluffy, about 3 minutes. Add eggs one at a time, then add vanilla. With the mixer on medium speed add in flour, cocoa and salt, mixing until just combined. Fold in chocolate chips.

Spread batter in the pan. Bake for 18-20 minutes, or until toothpick inserted in center comes out almost clean. Let cool completely before adding mint layer. When cool, beat butter and powdered sugar together in the bowl of an electric mixer, making sure to scrape down the sides until combined. Add in creme de menthe and mix until smooth and mixture completely comes together. Spread on brownie layer, then refrigerate until set, about 1-2 hours.

Melt chocolate and butter together (either in a double boiler or in the microwave – I do it in 30 second increments, stirring until smooth), then pour over top of mint layer. Refrigerate until set, another 1-2 hours. These are great right out of the fridge, but I especially love them once they have sat at room temperature and are super fudgey.

Note: these can be made in an 8×8 pan for thicker brownies, but they are super sweet. I love rich desserts and was happy with the 9 x 13 pan.