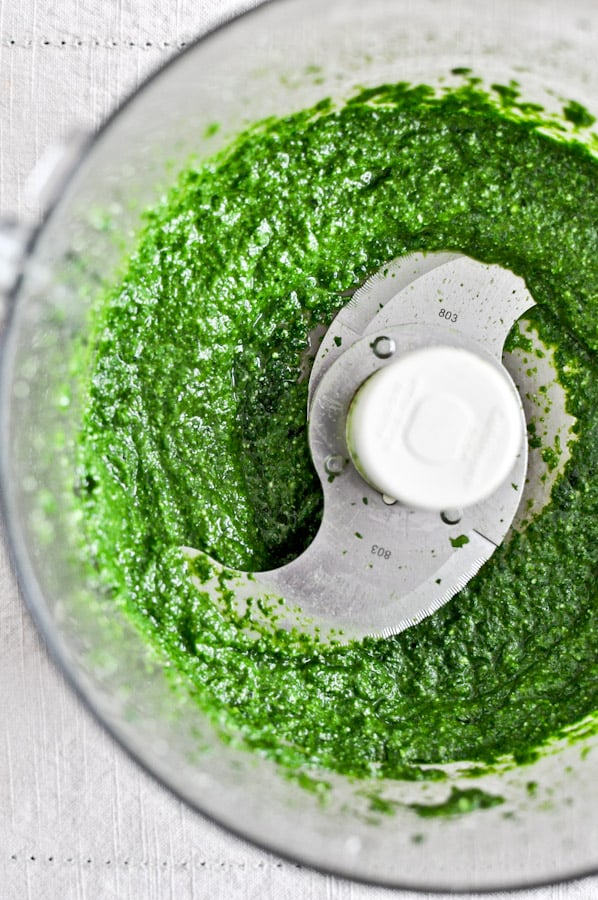 …which are pretty much the same thing. This makes my head spin. A little peppery and almost neon… this arugula pesto took one of my favorite crispy shrimp dishes to a whole new level last year. Basil pesto, what? I don’t even know you anymore. This was one of the first recipes I ever shared (hellllo freaky pictures) and still makes the top ten of which I whip up just about every month to have on hand.

People… this.is.huge. It rarely happens. Like, never. Because boredom calls to me like a creeper in the night. And while I think that mac and cheese is simply perfect on it’s own… that whole boredom creep grabs me and sometimes I torture the pasta.

Like, adding an arugula pesto swirl type of torture.

Otherwise known as… one of the only things I succeed at in my itty bitty life. We served this with the maple bourbon pork chops and those brussels sprouts I’ll tell you about later, and holy FLAVOR POP. And while I pretty much watched him attempt to pick out every single solitary speck of pesto (can this be done?), he soon gave up and scarfed it. And was happy.

Leading me to believe that just as I thought… I am always right. Today marriage is great.* Bring water to a boil and cook pasta according to directions. I always shave a few minutes off the cooking time since it will be going in the oven.

While pasta is cooking, heat butter in a saucepan over medium heat. Once sizzling, add flour and whisk until smooth to create a roux. Cook for 2-3 minutes, until golden and has a nutty aroma. Add milk and cream, bring to a boil while constantly whisking. Reduce heat to low and add cheese, then cook for a few minutes while stirring until cheese is melted and mixture thickens. Add nutmeg, then taste and season with salt and pepper as desired.

Add pasta to a baking dish and pour cheese sauce over top. Stir to distribute sauce, then stir in pesto. Top with additional grated cheese and breadcrumbs. Bake for 30-35 minutes, or until top is golden and bubbly.

In a food processor, combine garlic, arugula and cheese. Pulse until combined. Stream in olive oil a tablespoon at a time until the pesto becomes smooth. *I made this over a week ago. I’ve since changed my stance.