by Jessica February 22, 2012
Let’s talk about the state of my refrigerator. You know… I’m not really a pack rat. It’s one of the few traits I’m thrilled that I didn’t inherit from my mom and Mother Lovett, and I can easily pitch old birthday cards or baby dolls or whatever. I mean, sure… more often than not our house appears to be a cluttered disaster, but that’s not because I don’t WANT to throw things out. I’m just lazy.

I wish my husband shared these same sentiments but since he still has a pair of shoes from 1987 (um hello, I was like 5) in his closet along with a shrine to Sarah Michelle Gellar, that framed and autographed picture of Chris Benoit and nearly 400 CDs… I don’t think he does.

And after I flipped my lid when he attempted to throw away four packets of soy and duck sauce from takeout Chinese that had been sitting in that spot in the fridge where stuff falls out of EVERY TIME THE DOOR OPENS… I had a realization. I may not be a pack rat about most things, but when it comes to the fridge? I’m a freaking maniac. I’m not sure if it’s because I’m so in love with every drop of food that crosses my path (I’m looking at you beer risotto) or because I just totally despise wasting anything edible, but I keep things in the fridge past the point of death. And yeah, sometimes it’s just about being lazy but, uh most of the time it’s just… me. Oh and we should probably get one thing straight: that IS one of the unfortunate traits I inherited, given that last month my dad threw away over 10 boxes of expired Duncan Hines cake mix then watched my mom go and retrieve it from the trash. Ew? And WHYYYYY!!!?

This really came to a head two weeks ago when Mr. How Sweet rushed into the house in his normal, everyday manic I’m-so-hungry-I’m-gonna-!DIE! mode and proceeded to throw every item out of our freezer in search for something meat-like. Out came a half-sealed bag of frozen, breaded cod, which I certainly did not buy… and that expired in June of 2010. Next came the salmon burgers, also which I did not buy… that expired in January 2011. He wasn’t happy about that one because as it turns out, he really wanted a salmon burger. And did I think he could still eat one? Because I mean, they are like encased in a good inch of tasty freezer ice. That has to preserve SOMETHING. But no… I did not think he should eat one. Instead, he made some sort of frozen beef patty things which were disgusting, but I saved the day with homemade salmon burgers 24 hours later. I used my grandma’s crab cake recipe as a base and went from there, praying for a non-fishy burger with lots of flavor. His hunger was rewarded.

Oh and FYI? That was last Monday and there is still a salmon burger in the fridge. 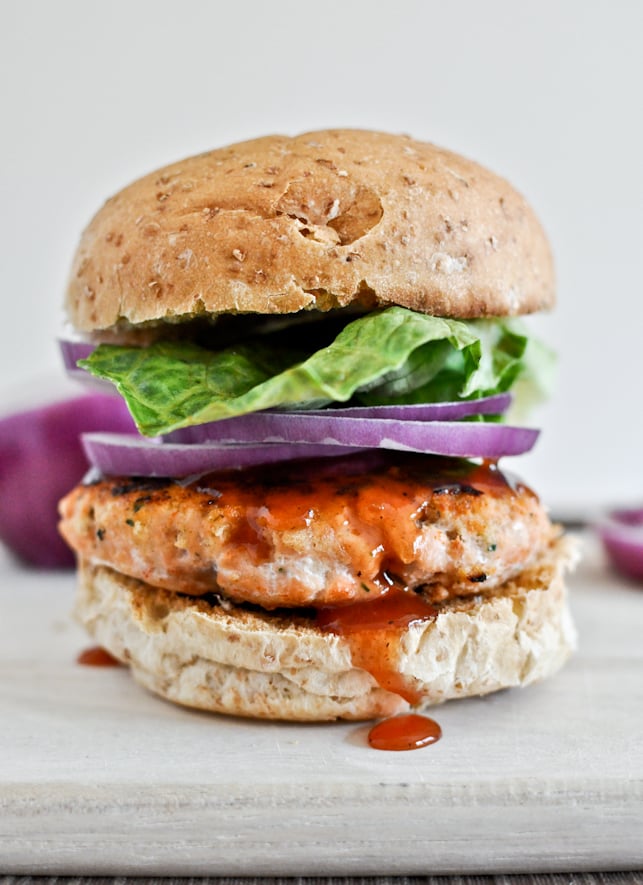 Add salmon to the bowl of a food processor and pulse until it’s somewhat ground.

Remove and add salmon to a bowl with remaining ingredients (except for buns!) and mix with a spoon until just combined. Form into 4 equally-sized burgers. Heat a skillet (or grill) over medium-high heat and cook burgers on each side until golden – about 3-4 minutes per side.