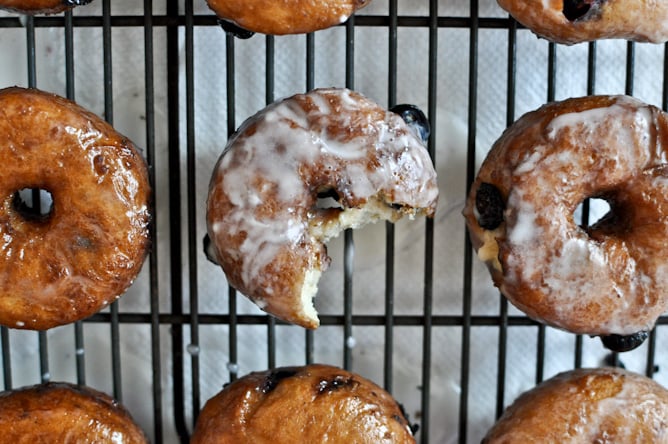 You know, I’m sort of annoyed. I really didn’t even like donuts before. I mean, they were okay, I’d eat them if they looked delicious or if they were… there, but they just were never my drug of choice.

Unless they were munchkins from Dunkin Donuts. Ugggghhh… every day I struggle with the fact that I want to plow through the drive-thru and order a box of 25 donut holes (okay let’s be honest – 50 donut holes) and just go.to.town.

But apparently, I’m an adult or something now, so I’m not really supposed to do that. Just another reason I hate being a grown up. 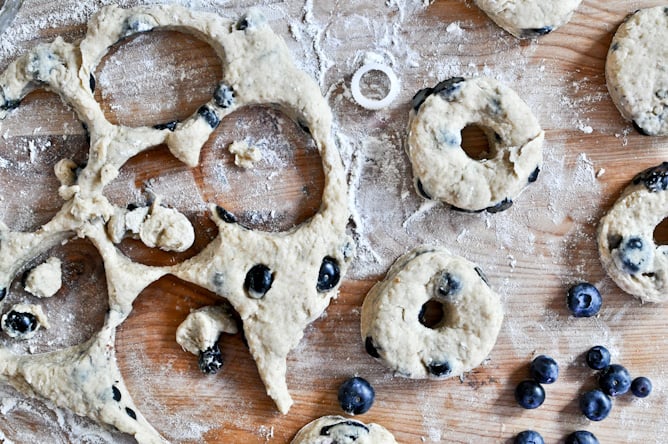 This is the part where I show you how dumb I am. 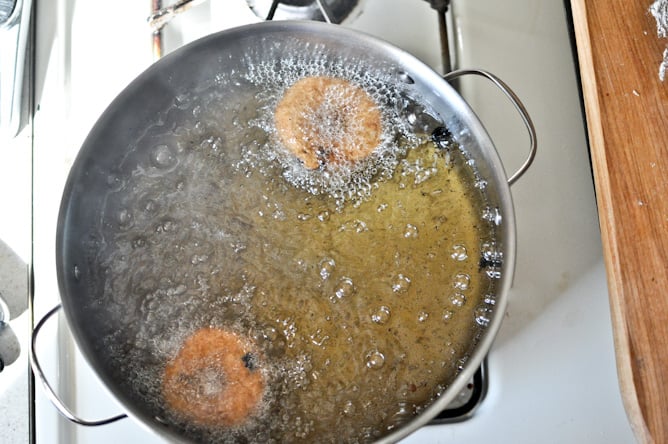 Lots of hot oil. Lots of hot oil specks flying everywhere. Lots of steam. And me, with my expensive camera held overtop, just begging for the lens to shatter under the heat.

See… I can’t break my camera, because that would mean less money I have to spend on shoes. Or lipgloss! Or books! Or snobby, expensive chocolate!

Again, grown up stuff stinks. Some days I literally think I’d rather sit in the dark, without any water, just so I can spend that money frivolously on something completely ridiculous. 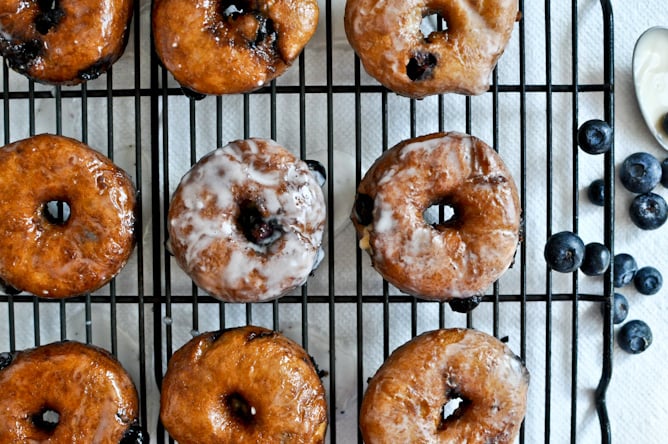 But anyway – back to me not liking donuts.

I mean, that’s not even relevant now, because I stupidly made those maple bacon donuts and well… ha! My life was over. My donut-hating life was over. I basically screwed myself for all eternity, because now I want to make homemade donuts EVERY SINGLE WEEKEND. I’m buying quart after quart of oil. It’s just… a mess.

It appears that I have a current obsession with blueberries, which is exactly how they ended up in my donuts. They are almost identical to those glazed blueberry donuts you can get in most donut shops, however I’m pretttty sure those places might use a bit of artificial blueberry flavor? Not really sure, but these are CLOSE. I’m just going to open up a little donut shop right in my little kitchen. Except I’ll probably eat them all first. Ugh. Problems. makes about 12-15 donuts, depending on the size of your cutter

oil for frying (about 1 quart)

In a large bowl, combine flour, sugar, baking powder, cinnamon, nutmeg and salt, stirring to combine. In another bowl, combine egg, milk and vanilla extract, mixing together. Add melted butter to the dry ingredients, quickly stirring to disperse the butter and form small crumbs. Stir in milk and egg mixture, bring the dough together with a spoon. Before it comes completely together, add in blueberries, mashing some as you go along if desired (I suggest thing!) and bring dough together with your hands. Form it into a large ball, then roll it out on a floured surface to about 1/2 inch thickness. Cut donuts using a donut cutter, a biscuit cutter, or even a knife, using a small lid (or frosting coupler as I did) to cut out the center. Repeat with dough scraps until all the dough is used.

Heat oil in a large pot or deep fryer, bringing it to 375 degrees. Fry donuts 1-2 at a time, frying for about 1 1/2-2 minutes per side. After your first donut, check it by cutting into the center and making sure the dough is cooked through. Finish remaining donuts, then dip the entire thing in glaze and let sit to cool before serving.

Whisk ingredients together until a smooth, runny glaze forms. If it seems too thin, add sugar a few tablespoons at a time, stirring. if it’s too thick, add more water by one very small drop at a time, whisking constantly. Dunk donuts in the glaze and let sit to set. Yum! Maybe I can trade donuts for shoes? Hmmm.