But not. We all know I am anything but sorry here. Beer marshmallows are one of my favorite things ever. And I figured there were a few ways they could get better, and subbing bourbon was definitely one of them. So I did that. And that was on a Friday. And I let them sit overnight. And in the morning, I remembered that I had these bourbon marshmallows, and all I could think about was how I wanted one for breakfast, because if it was up to me, I’d eat sweets and dessert for breakfast, lunch and dinner. Obviously… if it was up to me… I wouldn’t be able to fit through the door. 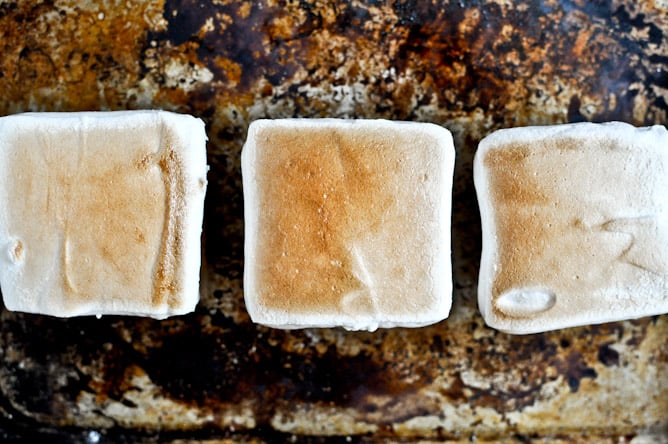 I only fried a few slices of bacon, and before I was able to assemble my s’more, someone (not me) came and ate all of my bacon! This was annoying. You’re killing me smalls. Oh but first I made a regular bourbon s’more. To test the waters. See above. Then came the bacon. And seriously, you know how much I freaking adore all things s’mores, and you know how much I love bourbon, and well, I’m not even mentioning my stance on bacon. It’s getting quite obnoxious and annoying so I’m just going to eat a slice and shut up. And these… I’m just not sure that there could be a better flavor combination for my very unsophisticated palate. I’m not sure if there is anything better in the world, aside from these s’mores right here.

Except for unexpected 98 Degrees songs on the radio, trashy magazines to save the day mid-workout after your iPod dies, flowy tops at food events, Sex and the City marathons, discovering ten cookies in the back of the freezer and getting lost in a fabulous book. Of course.

And let’s face it: how often do you want a s’more with a side of bacon? The answer is always. Good. We can still be friends.[/donotprint] Oil a 9 x 13 baking pan (I actually just used a good bit of Pam) and sprinkle on powdered sugar to cover and coat. Set aside. In the bowl of your electric mixer (a whisk attachment is best), pour 1/2 cup cold water and 3 1/2 packs of gelatin. I gently mixed with a spoon once, then let sit while you make the sugar mixture.

In a medium pot combine sugar, bourbon, syrup and salt. Heat over low heat and whisk until sugar is dissolved, about 3-5 minutes. Turn heat up to medium and let sugar come to a boil. It will bubbly up so keep yours eye on it so it does not overflow. Let it boil for 8-12 minutes, until it reaches 240 degrees F (measure with a candy thermometer). The mixture will appear to be a lightish brown color – don’t worry, the marshmallows will still be white.

Once mixture is at 240 degrees F, turn off heat and gently pour it in the mixer over the gelatin with the mixer on low speed. Once all of the sugar has been added, turn the mixer to high and beat for for 6-8 minutes. It should grow in size and be white and fluffy. About 3-4 minutes in, add the egg whites to a separate bowl and beat until stiff peaks form. I used a hand mixer to do this. If you don’t have a hand mixer, I assume you have to remove the whisk attachment, clean it (it will be a sticky mess), add a new bowl to the mixer, beat egg whites. Once stiff peaks are formed, add egg whites and vanilla extract to the sugar/gelatin mixture and beat until just combined.

Pour marshmallow mix into the 9 x 13 pan. It will impossibly sticky so be careful, and you will not be able to get it all out of the bowl. Get as much as you can, then spray a spatula with non-stick spray and smooth. Dust powdered sugar on top and let sit to firm up for 3-5 hours. Once firm, turn the pan upside down on a cutting board to release marshmallow rectangle. Cut them into pieces of whatever size you like.

For the s’mores, you obviously need some graham crackers, chocolate bars and crispy bacon. I don’t think I need to give you a recipe for that and insult your intelligence. 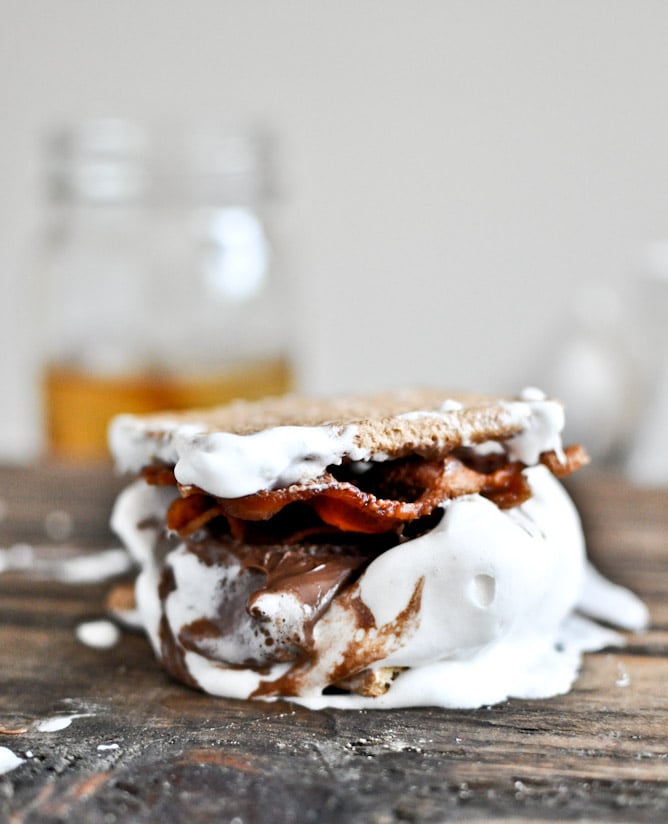 Now at least you know what you’re doing this weekend! Right right?

« Previous PostFresh New England Clam Chowder with Brown Butter Garlic Croutons.
Next Post » Summertime Girls Are The Kind I Like.