I TRIED. I tried to stay away. I tried to eat something more dinner-like. I had kale sitting on the counter to make chips. I had tortillas out for a quesadilla. I had a spoon in a peanut butter jar which is like, almost dinner.

But I also had leftover mini cheesecakes in my fridge.

What would you choose? Exactly. I mean, I tried to save it for dessert, but it was just pointless. I could think of nothing else but these creamy coconut cheesecakes in my fridge and how sad and lonely they looked sitting there on the shelf and how I should most definitely comfort one with a spoon.

You see how that turned out. Oh oh – and I made them with goat cheese. In case you missed the title way up there.

Tangy, creamy goat cheese. What do you think about that? Crazy, awesome, weird, amazing? Last week, while at an event with Dole, we were served some lemon goat cheese cheesecake after lunch at the Corkscrew Cafe that was so light and airy that it blew.my.mind. [Uh, there was also meyer lemon PIZZA. But that’s another story for another day.]

This isn’t AS light and airy… but it’s a little light and airy. Like, really just a little. Because it’s pretty freaking creamy. Weirdly enough, this dessert isn’t super sweet either. It’s silky and melts in your mouth, but it isn’t so sugary that it makes your teeth itch. Which, duh… is like the best kind of dessert ever.

But it’s okay. I’ll make a sacrifice for this. And people? This cheesecake does not taste like it came off a farm. I had ONE bad goat cheese experience (that nearly left me scarred) but I know that many of you have had them as well. Since you’re mixing the goat cheese with a handful of other ingredients, you get that token tang but not a whole ton of goat and farm and… whatever… flavor. I know, I know… I’ll stop.

The other best thing ever? This is EASY. I’m talking really easy. As in beat the ingredients together and pour them in a dish. No baking, no cheesecake cracking, no water bath, no covering up the top of your ugly cheesecake with a last-minute whipped cream since it looks like death. No stressing. Whip it together, pour it in a jar, set it in the fridge. The worst part is waiting for it to chill, buuuuut… that’s what the peanut butter jar is for. 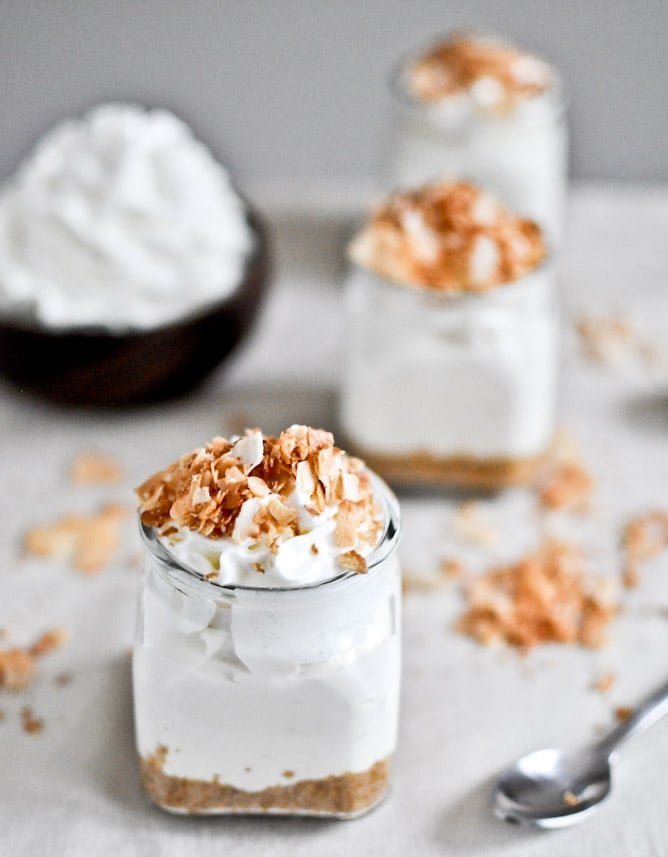 In a small bowl, mix together butter and graham crumbs until moistened. Press crumbs into the container of your choice (jar, ramekin, etc) with the back of a spoon.

In the bowl of an extract mixer, beat cream cheese and goat cheese until combined and smooth, scraping down the sides when needed. With the mixer on low speed, slowly drizzle in the condensed milk and then the coconut milk, continuing to scrape down the sides until the mixture is very smooth. Add in extracts and stir.

Pour cheesecake mixture evenly over top of crusts. Refrigerate for 4-6 hours, then top with whipped cream and toasted coconut. Serves one. I mean six.