Before I left for vacation, I ate this every.single.day. I mean really, every single day.

It was easy. If I wasn’t traveling, my husband was traveling, which means that I get to eat a bunch of things for meals that only a girl in her 20s would qualify as a meal. It was also insanely hot and even though I had a few ridiculous moments of turning on the oven for hours at a time, when it came to most of my own meals, I survived on things that came straight from the fridge. Cold things. Very cold things.

Want to know what else happened before I left for vacation?

Indulge me. It was terrifying.

The night before we left, I was running around like a crazy person trying to get things done – things like edit photos while eating the last mini cheesecake in the fridge so it wouldn’t spoil. Important stuff. When I finally made it up to bed – with the hopes of getting four hours of sleep before we left – I spent a good 30 minutes wasting my life away on my iPhone. Because I am addicted. No other good reason.

But really, that happens every night. I’m spent. Exhausted. Can barely hold my eyes open. Yet I always find 20 minutes or so to waste away while looking up random garbage on my phone, like if these Nine West peep toe shoes I’ve been eyeing for three months have come back in stock. Guess what? They haven’t. I’M DYING.

Anyhoo. I’m finally soooo tired that I’m literally almost dropping the phone every 15 seconds, so I place it on the nightstand, roll over and get settled for some shuteye while watching Friends for the billionth time since a life without electronic interruptions does not exist.

I felt something weird on my arm, like a crumb or something. Maybe something that stuck to my arm while I was cleaning up the kitchen? It took all of ten seconds for me to realize that OMG, this could totally be a bug on my arm. I fly out of bed, trying not to disrupt my husband who is sleeping in his own bed for one night, flick on the light just in time to see this huge hideous bug scurrying about the covers. If you know anything about me, it’s that I loath bugs. Yeah yeah… I’m childish, immature, spoiled, whatever. But I hate them. I mean, I have many irrational fears in my life, and one of them is that a spider or something awful ends up crawling in my mouth while I sleep. And now there is a freaking BUG ON MY BED, which was mere centimeters away from my mouth. O.M.G.

But guess what? I was an adult. I flipped out mentally, but tried to hold it together and kill the bug without waking my husband who at this point, who had to be awake in three hours.

Which meant I had to be awake in three hours.

Which meant that by the time I had enough courage to actually get back in the devil-infested bed, I had horrible visions of things crawling all over me underneath the covers and was awake for another hour.

So yes, two things I did before vaycaaaay: eat a thousand roasted blueberry parfaits and almost sleep with an insect. I like the first thing better.

I’ve been eating quinoa parfaits since I first saw Brittany share one years ago. In a word, I’ve become obsessed. Okay that was three words, but whatever. They are one of my favorite things to chew because they are so simple, so flavorful, and have a ton of texture. <- mandatory. I’ve been freaking out over coconut breakfast quinoa. And all I’ve been thinking about are the roasted blueberry cupcakes I made last year at this time and how I want to shove 50 of them in my face. At once.

This was just the most logical solution. The love child, if you will. 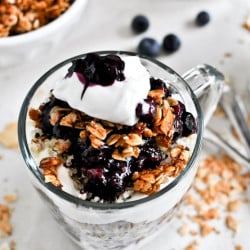 Even makes bugs and stuff better.