I have something to show you! And no, it’s not a messy kitchen with a 15-pound cast iron skillet on the counter, next to an onion, scissors, two empty ice cube trays (haven’t filled them in two days… ugh) and the most random combination of lime sea salt dish soap and peanut butter. But you get to see that too. Lucky lucky. It’s not this strawberry salsa either, which I single handedly consumed with a spoon mere minutes after taking this photo, absolutely burning the CRAP out of the my mouth. Someone was a little too lazy to remove all of the jalapeno seeds. They need to be punched in the face.

Someone also needs to relax on the fruit salsa front. Is it really fair of me to chop up whatever fruit I feel like and add an onion, cilantro, jalapeno, lime juice and salt to the bowl then deem it the “best salsa in the world!”? It seems too easy. 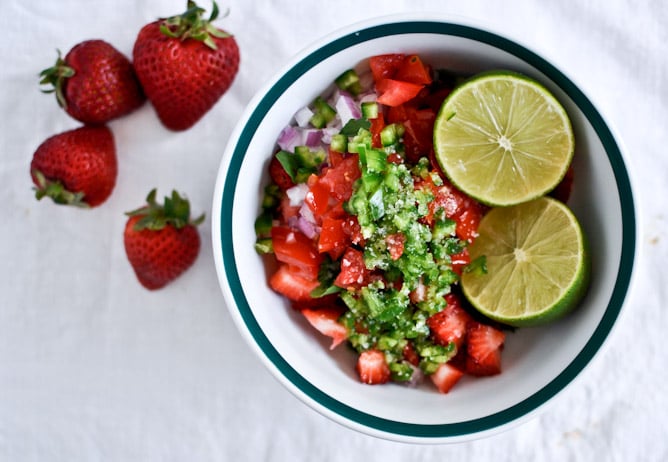 Wait. Sidebar. You know what else? Someone, and this time it’s really not me, needs to stop spoiling the freaking Olympics every 30 seconds. And by someone, I mean everyone. I may be the type of person that reads the last page of a book before I begin the first chapter, but this does not mean I want you to spoil a good bit of suspense on the uneven bars and vault. I mean, I need SOME sort of excuse for all of the emotional eating I’m doing at 11PM, in bed, while watching these people flip head over feet. I think my heart jumped out of my mouth a few times.

But um, now what I really want to show you: Sunday’s lunch. Caramelized pineapple inside a quesadilla. Caramelized pineapple right in your face. Eh. Exciting right? Built up too much? So delicious you can’t stand it? Wishing it was something more outstanding? Well, whatever. While on vacation, we spied it on a menu but were too tempted by the truffle fries and all-you-can-eat fried fish to order something so gourmet while sitting in our swimsuits unshowered. What did I do? Brought out my phone and typed it in my notes, claiming “OMG I need to make it as soon as I get home,” specifically placing it sandwiched between funfetti marshmallow s’mores and bacon-wrapped roasted chicken, figuring I’d make it in the next few weeks. All about priorities. But then… I mean, you know how I get. Freakishly obsessed with meals, right? On the 8-hour drive home, it was all I could think about. Instead of being responsible and unpacking and cleaning, I went out until two in the morning, leaving all responsibility aside until Sunday. The next day, mid-chores and cleaning (worst nightmare ever), I dropped everything to eat, which is status quo, especially on housework days. Luckily my husband had gone to the grocery store in a fit of hungry rage, which meant he bought everything in sight, including pineapple! It was meant to be. So it was.

I feel like I used way too many commas up there. True story. Lots of flavor here, super simple meal, and something uniquely different enough to keep your taste buds happy? Yes. I stuffed these whole wheat tortillas with the caramelized pineapple, some grilled chicken, and tons of cheese and some fresh herbs. Then the whole shebang was crisped in coconut oil which was, uh… the best idea ever. Cover the thing in strawberry salsa and you’ve got it good. 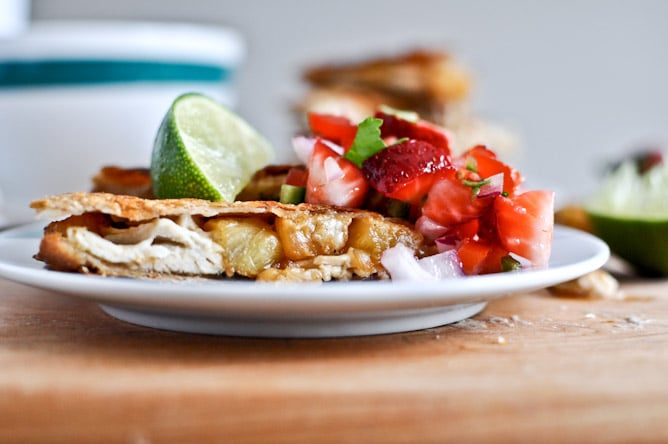 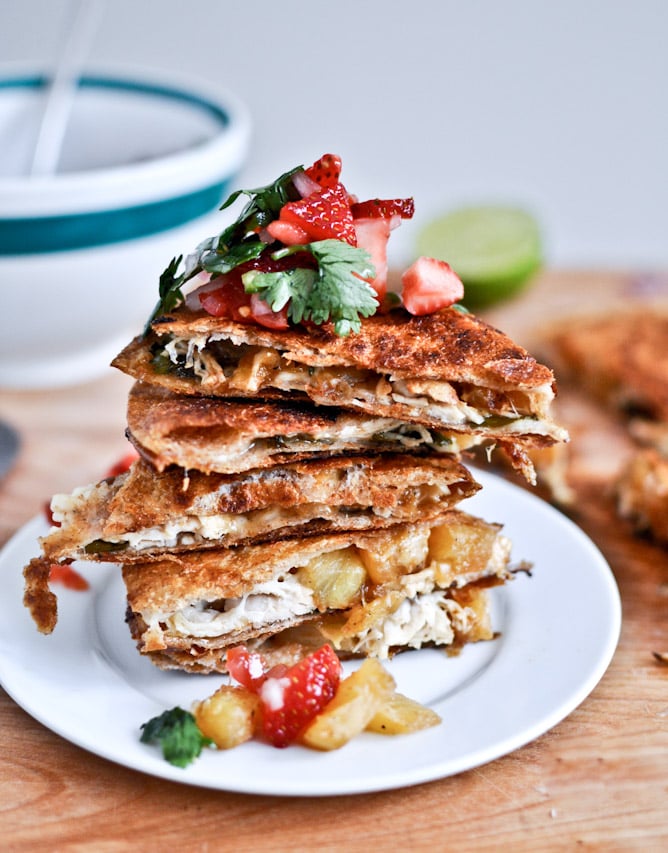 PS: did I really say “housework?” I seriously am 70 years old.