Soooo I probably have to make another batch of this crockpot chicken today. Traveling with my husband is semi panic inducing, but only because I am the controliest of the control freaks. I kinda sorta only have one pet peeve in life and it’s to be on time (or even in my mind, like 20 minutes early) for EVERYTHING. Especially flights. Especially to the airport. Like I would rather get there three hours early and sit at the gate with nothing to do because I’m such a mental maniac. At least that way I know I will be on time.

Well. He’s not like that. Mainly because he travels often so he has a system down. We travel together well (besides my always 85-pound suitcase) but arriving… that’s a different story. Last week I decided that I would leave it up to him and not be a psycho freak about being on time. A wise woman (my grandma) once said about husbands… just tell them once, then they know. Hmmm. I think he sensed my patience and we left earlier than he normally would. Early enough to wander around and eat. Good, great, awesome. What transpired next was me figuring out at 8:15 that our flight took off at 8:25 and not 8:50, which caused us to fly through the airport, me with a half-eaten bagel and a very Kelly Kapowski-esque off the shoulder sweatshirt (thanks to Bayside they will always be in style) and a very heavy carry-on because I always think I need everything to travel and then proceed to do nothing on every flight I’m ever on. To make matters worse, we flew on Southwest which is a control freak’s NIGHTMARE. Correct? What do you mean no assigned seats? I basically have a meltdown until the plane takes off that I may not get a seat. After it takes off, I’m still emotionally stewing from my seat anxiety.

I seem like a ton of fun. I’m sure. Don’t worry. I only flipped out for like ten minutes straight then and then we didn’t talk the entire flight (for which I was surely punished as on my other side sat a man who 1. loved to talk and 2. seemingly had never flown before so had many, many questions) and I was like FROM NOW ON I AM CONTROLLING ALL THE TRAVEL THINGS IN THE UNIVERSE.

Compromise is my middle name. As if he didn’t feel bad enough already, I think that I kept maybe, like, reminding him of it all weekend? And now I’m writing it down? And tweeting it. So yes. I should probably make something meaty and sandwich-like. Stat.

While this pulled chicken looks utterly boring, it tastes super. I don’t even know how to describe how freaking easy it is and the resulting deliciousness that will sit on your bun. For as unphotogenic it is, it’s about fifty times more tasteful. It tastes almost like these chicken cheesesteaks but is much lower maintenance.

Clearly me and this chicken have nothing in common. 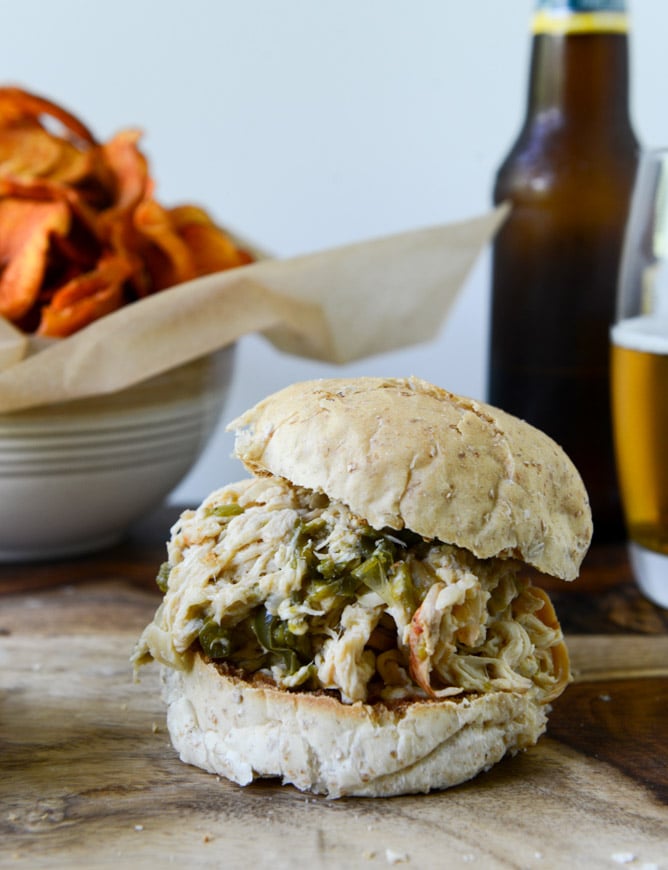 Oh and P.S. we ate it with these chips. And by “ate it’ I mean I stuffed the chips on top of my sandwich.