It’s very weird to not be talking about pizza or breakfast. 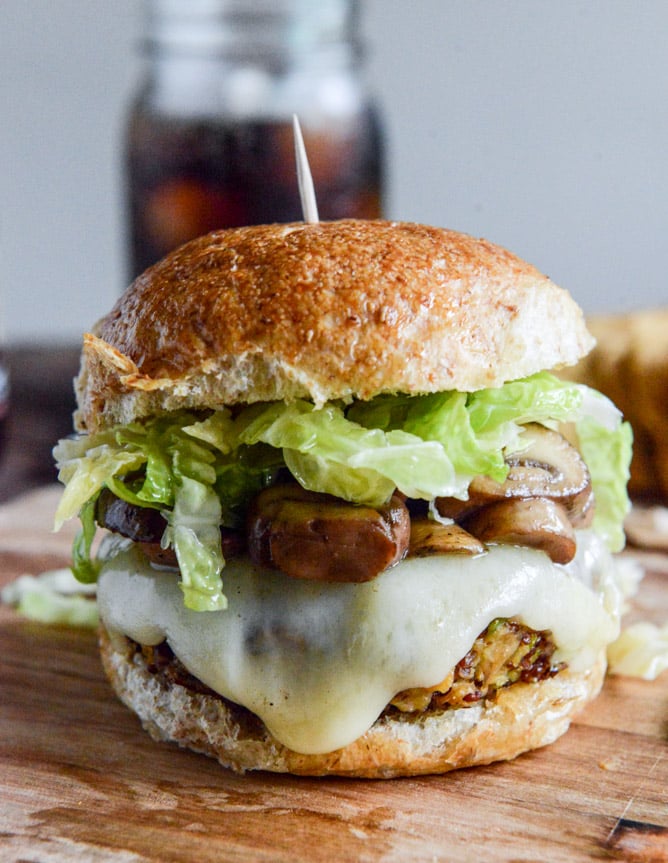 Because I’m pretty sure that all I ate for the last four days was pizza AND breakfast. And popcorn. Kettle corn, to be exact. We bought what can only be described as a large vat yesterday and proceeded to eat the entire thing… on the drive home. Like we were fighting over each others’ hands in the bag. Guess who’s cleaning their car today?

It was so dang good. As was breakfast and pizza but you know. 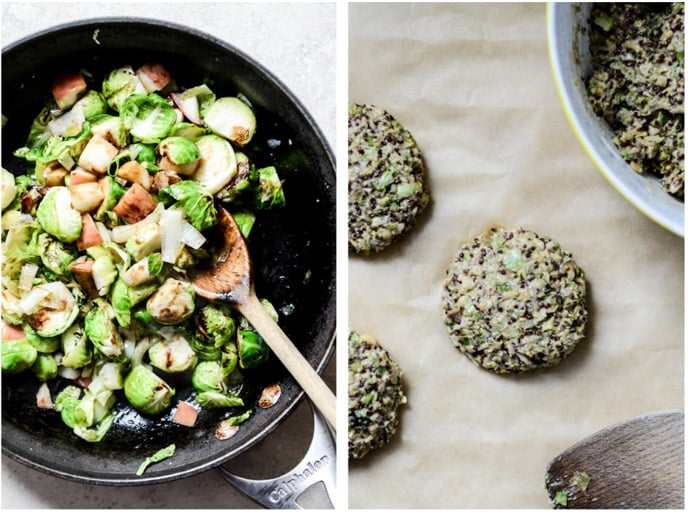 So these bean burgers. Well.

What I can really only say is an actual miracle, my husband has sort of started to eat some things that don’t contain meat. I don’t even want to talk about it because 1. I’m sure it’s a fluke and 2. he basically only does it when he is either starving or not in the mood for anything, but still… it’s happening. And now that I mentioned it he will probably refuse to eat anything meatless for the next four months. I also think he eats things like this in ADDITION to his meaty meals, so that might be the key. Whatever it is, I’m not complaining. I mean, of course I am complaining because that’s pretty much all I do here, but you know what I’m saying. Bring on all sorts of meals that don’t contain two pounds of beef.

I should have prefaced that all with a disclaimer of, oh…say… I’m not really sure if he’d do this whole bean burger thing for dinner. That seems to be the meal that he considers a real MEAL, but he is willing to accept such a sandwich for lunch, or of course – a snack. I made these one afternoon and he happened to come home, grab one, and eat it. Happily. Plus, they had sweet potato chips on the side which are clearly a vegetable since they are named sweet potato chips so that probably helped.

Huh. He probably considered it a snack. Drats.

Whatev, these burgers are stacked and loaded. 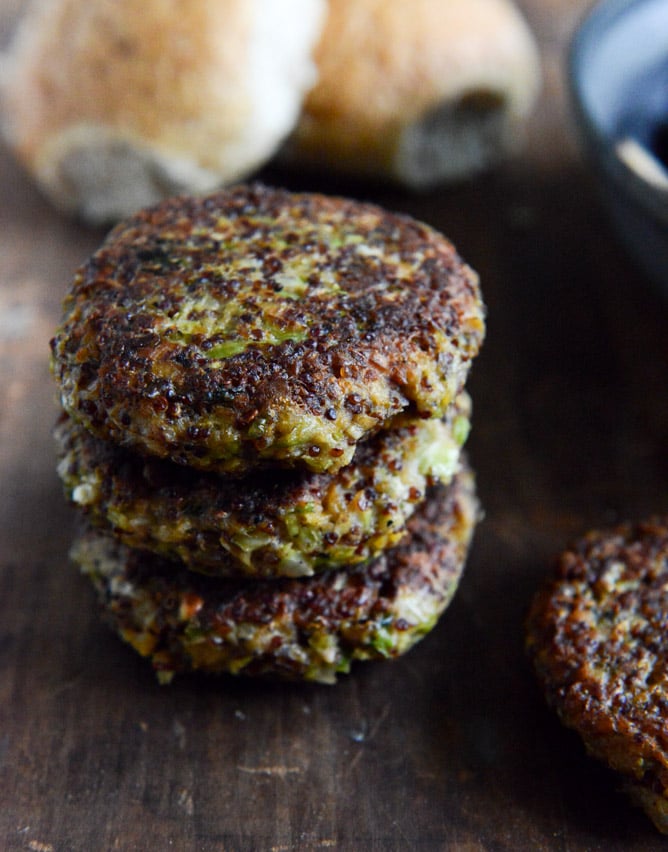 They fall right in my line with my bean and quinoa burger loves – over the last few years they have become one of my favorite weekend dinners, if for only one reason: the recipe makes enough and I get them all to myself, which means I have lots of leftovers and lunches. I will reheat these babies and have another burger, I will throw them in a grilled cheese for a makeshift patty melt, I’ll add them to a salad with a million different toppings or I’ll just eat them plain, maybe dipped in something, with a few things on the side.

Versatility is my middle name. (not really.) 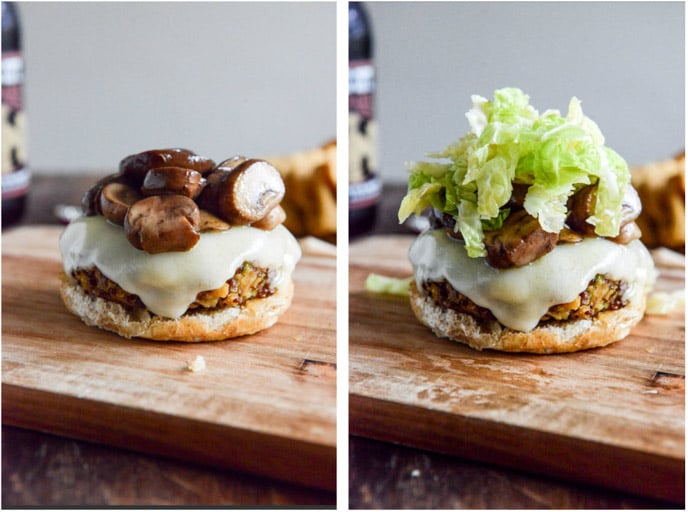 The burgers are an autumn-ed (yeah, see what I did there?) up version of my crispy quinoa sliders, albeit a bit more crisp. And to probably weird you out: I added Brussels sprouts TO the burgers. Yes, inside the burgers. I added apples too.

But do not fear: these odd additions were sautéed first and then given a heavy handed dose of balsamic vinegar, deeming the savory enough yet still a bit sweet to shove inside a patty of beans and quinoa. Or as predicted: trash up, if you will. 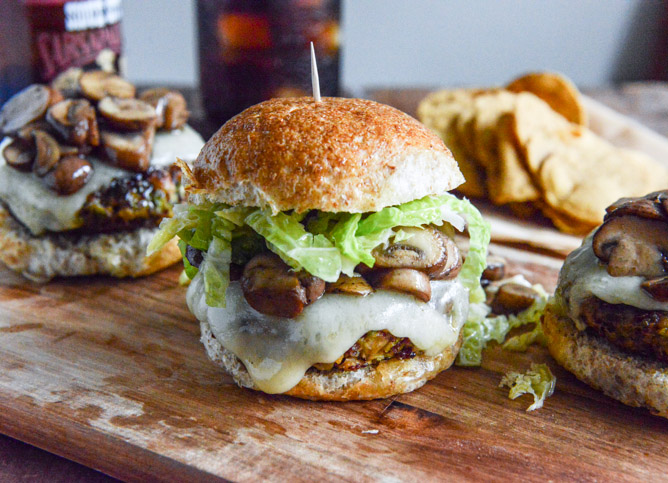 On the top I threw together a quick little slaw, if you even want to call it that. Mostly because I had some leftover apple cider and holy cow – I freaking love apple cider. The amount of recipes I have on my list that include apple cider is ludicrous. But also because while I’ve never been a slaw fan (at least not of the creamy variety, though I must say that I made a killer version a few weeks ago when we smoked some pork), I really enjoy it on sandwiches. It’s probably the crunch and the whole texture thing. You know how important that is to me. What a dweeb I am.

Oil and vinegar slaws are my thing – sort of like a salad on your sandwich – because they give you that tart, briney flavor with a little hint of sweetness.

I actually ate this slaw with a fork, so something must have been done right.  I live for the tart, briney flavors. I’d be gleeful in a world full of pickles, olives, mustards and vinegars. Oh so good.

On top of the burger and under the slaw went a bunch of sautéed mushrooms just because it needed something else and well, because… I’m kind of in a mushroom phase. A juicy, garlicky, buttery mushroom phase. We can talk about that more later this week. Wink wink.

Alright. Done be annoying. Eat up! 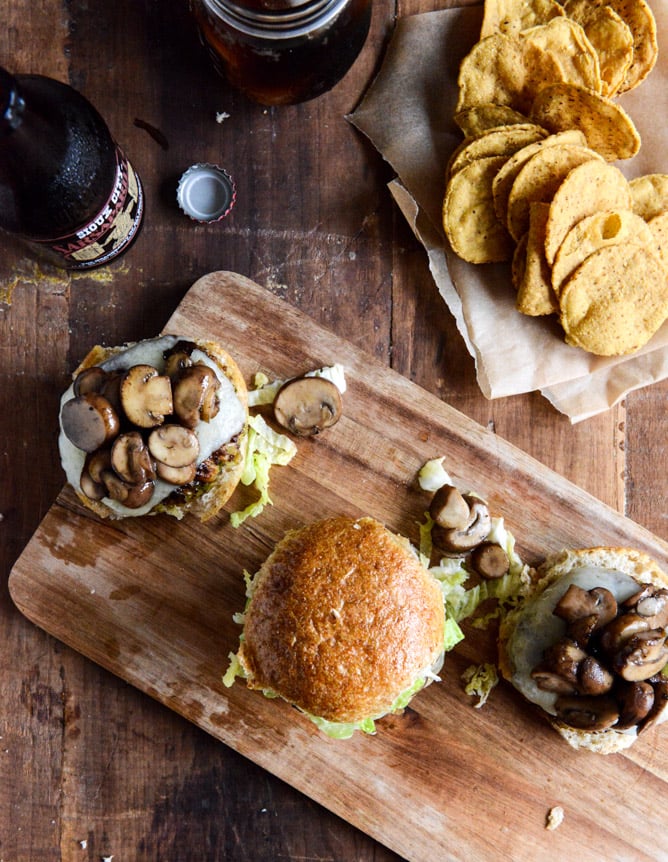 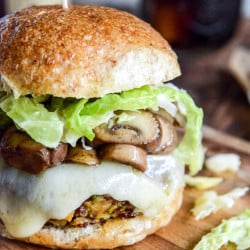 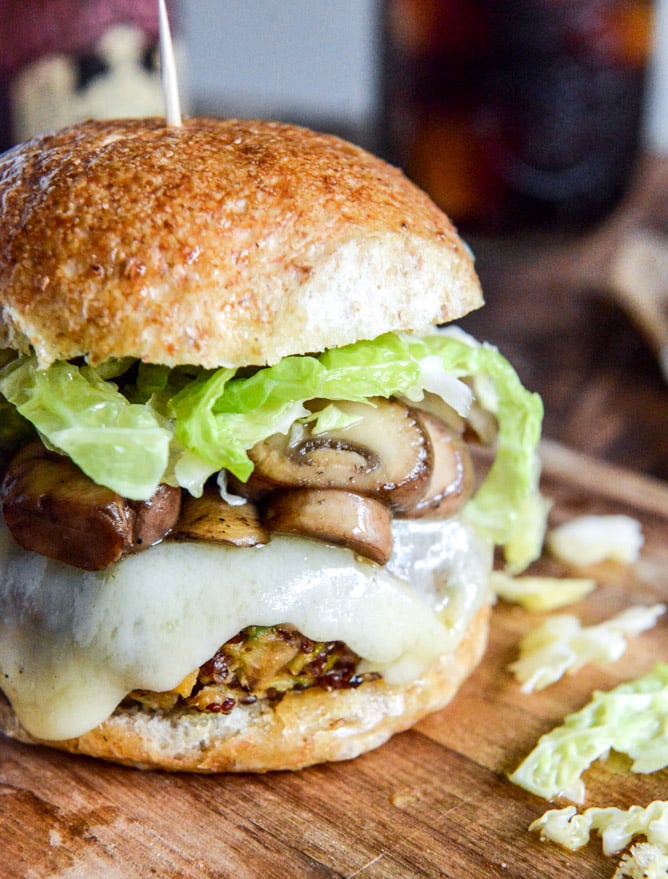