That was a terrible opening, no?

But I’m coming to you this Sunday with GOOD gravy. Last year on a Sunday before Thanksgiving, I shared my mom’s killer gravy recipe and a step-by-step post on just HOW she makes it. She makes the best gravy ever. Truly. It is always perfect: perfect in consistency, flavor and even appearance. It reheats well for days afterward, which in my opinion is totally huge for gravy. Of course, much to her dismay, I had to trash up a version this year. I wanted to attempt a gravy with a different flavor and one that may not even necessitate using turkey drippings as a base so I could make it all.the.dang.time. YES.

And still use her method, because it’s the best. At least it gave us an excuse to eat gravy a few weeks ago? Now, if you’re weird about texture, you might want to puree the gravy so the shallots add the flavor but not the caramelized pieces. It’s totally up to you. You could probably even puree it with the bacon inside, but I mean, who doesn’t want crispy pieces of bacon in their gravy? In other Thanksgiving news, I think I’m making a version of my lightened up green bean casserole and definitely my lightened up sweet potato casserole (it’s really just a coincidence that these both happen to be “lighter” versions and let’s be real, on the day I will probably add ten thousand pounds of brown butter) for the day. I really want to make these whipped bourbon sweet potatoes from last year that have crispy sage and bacon and a lot of other delicious things, so I actually might make them for dinner one day this week. But then I also want these cinnamon sugar hasselback sweet potatoes that have an oatmeal cookie crumble. WAH. It’s like two weeks of Turkey Day food so I can get my fill.

We might have to talk more about Thanksgiving later this week, huh?

If you’re looking for a deeeeelicious turkey and you have a smoker, you should totally make this applewood smoked turkey with cider bourbon gravy. Our smoker = love. I’m totally down for a little love pot of gravy with two straws… if you are. 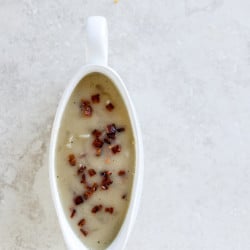 P.S. those potatoes… we talk tomorrow.