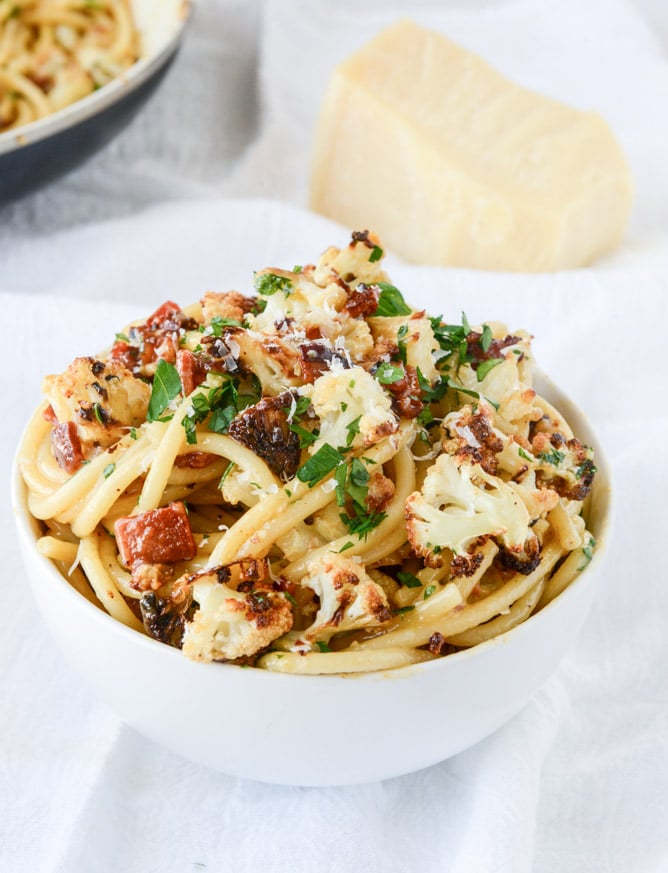 Tell me… what do you get when you roast cauliflower in bacon grease?

Heaven on earth. That’s what.

Way before I had a come-to-Jesus meeting with vegetables, like in my earliest twenties when I still could barely choke down any plate of greens and plain out refused to eat them, cauliflower was one of the first veggies I started to eat consistently.

Weird, right? Weird, because it’s usually one that most people loathe due to it’s lovely scent and not so cute appearance. But here’s the thing: someone in the gym told me that if I roasted it? It would taste like POPCORN.

Okay, so they weren’t totally wrong. It does get sort of popcorn like, and I’ve found that if you roast it in coconut oil, the popcorny-ish flavor is even a bit stronger. Might just be me though. After that chunk of time, the roasting of the cauliflower phase, I saw Giada lightly bread the white florets and… fry them. Yep yep. Fry them. In a lovely light batter. Eddie and I had just started dating then, so I would make broccoli and cauliflower that way. Like, um, every night. Lightly battered, fried and thrown on top of a salad or something.

It was SO good but then we were like… wait. We probably shouldn’t eat actual fried vegetables every single night. For dinner. I mean, if it was up to me I WOULD eat fried, like deep fried, veggies every night and even though it technically IS up to me, I’d prefer to not die prematurely so we decided to keep the fried things to a minimum. You know – like once per week. Fast forward a few years when I realized that not only SHOULD I not continue to eat like a teenage boy, but that I couldn’t not eat vegetables without feeling like garbage (or, apparently a “garage” which is what I just typed instead because you know NO SLEEP EVER) and crud. And then I started to force myself to eat green veggies and the cauliflower sort of went by the wayside because I got all caught up in the whole kale!-brussels!-broccoli!-are-the-best-and-omg-if-you’re-not-eating-them-you’ll-die-and figured if I had to eat any, I may as well eat those and wah wah wah – there goes the cauli.

Especially because I can not do cauliflower raw. No can do.

Then people started making cauliflower steaks. “Steaks.” If there was ever any oxymoron in my mind, this is one. Regardless, roasted still has always been the ONLY way I can enjoy it so the whole “steak” thing isn’t that way off for me. Back in the day – like the embarrassing day – I posted an old school crispy cauli with hot parmesan dip made with greek yogurt. Still LOVE that dip. The cauliflower just has to be all caramely and roasted and charred for me to get behind it…

And why not roast it in bacon grease? Seriously. WHY NOT. If you’ve got it, flaunt it. The grease that is.

Because it is freaking delicious. And then combined with pasta and the creamiest sauce? Gahhhhh. Remember how my pregnancy was super boring without any fun and crazy cravings? Well one of the things I did really want was spaghetti carbonara but I got all up in my own head that I shouldn’t do it with the raw eggs, even if pasteurized. A few years ago when Eddie was traveling constantly, I made a version of pasta carbonara often because it was so super simple. All you have to do is wait for the pasta to cook and the bacon to fry and bam – comfort food that’s to die for.

While this version is a teensy more high maintenance since you have to wait for the cauliflower to roast, it’s totally worth it if you have the time. The cauliflower adds that slightly sweet and charred roasted flavor, increasing the flavor power of the entire dish and, frankly, adds a vegetable other than parsley to the skillet which means it… can… be… good for us! 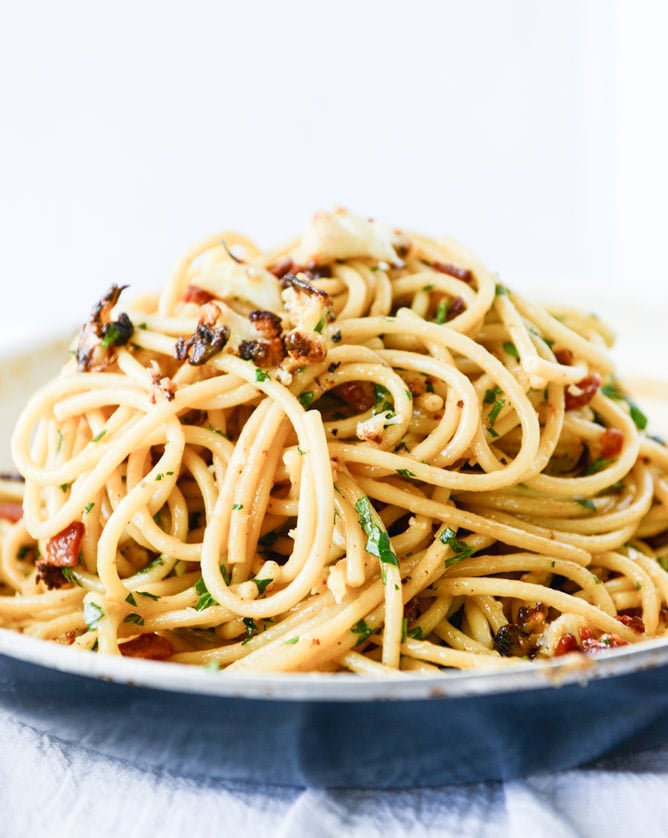 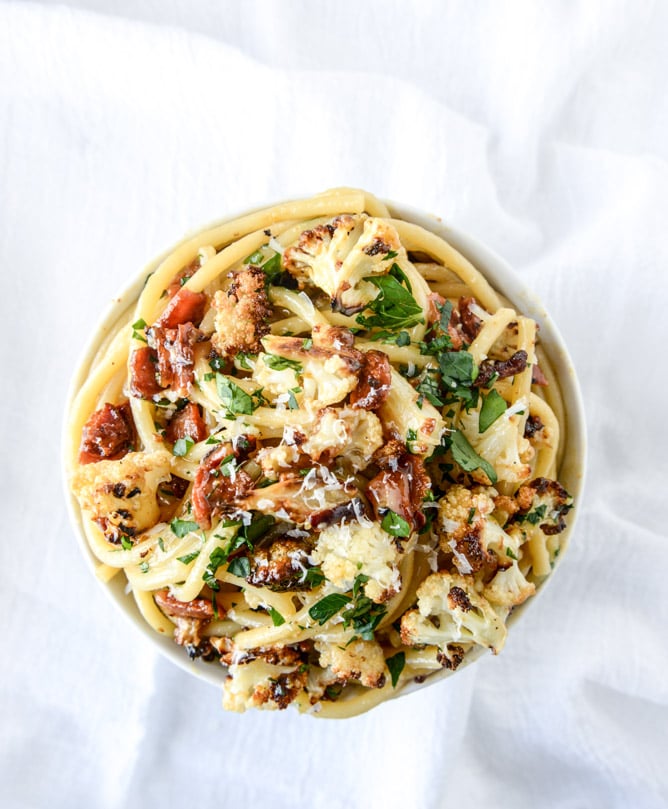