Can we bridge the gap of the last seven summer days? 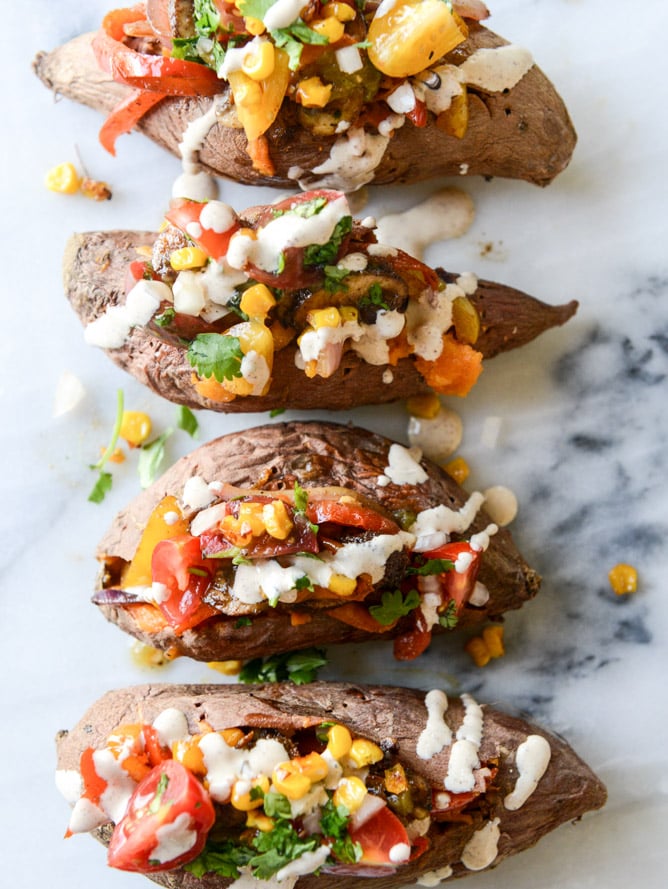 I think we can.

Hi. Hey! How are things? What did you do this weekend and did it turn all shades (degrees?) of autumn in your neck of the woods? I tried to stop living in my little sweet valley high world and finished off Saturday night with a big boozy milkshake.

I didn’t regret it.

And I certainly don’t regret it now since I have a plate full of late summer veg! Juicy tomatoes and roasted corn and lots of peppers. Stuffed in ANOTHER vegetable, known as the sweetest of potatoes. I want to do a salsa swan dive. Um, over the weekend I realized that I have about ten recipes backlogged to share with you and then I realized that every single one of them has a tex-mex flair. OOOPS. I desperately need to include that monkey emoji that is covering his eyes right here, right now. Like five of them for dramatic wordless explanation.

And I totally didn’t mean for these to be anywhere near similar to Thursday’s crispy tacos, but fajitas are sort of tacos even if the sweet potatoes here are masquerading as tortillas. So. We take stuffed sweet potatoes verrrrrry seriously in this house. We adore them. First, I find that they make a great transition meal into the cooler months. Second, they are super hearty while remaining fairly healthy. Unless you stuff them with cheddar and bacon, of course, but who on earth would do that?

I have no idea.

We like to stuff them with buffalo chicken too, maybe. And since this has 100% been the summer of fajitas, I figured… why not?

Plus, they are super simple, like you can bake potatoes ahead of time and then just shove your favorite toppings inside. If you have a few more minutes, you can scoop out a bit of the sweet potato and mash it. I like to do that because I’m high maintenance. We served these with an array of salsas and can I just say that the Trader Joe’s hatch chile salsa is to.die.for?! Annnnd I might have my own green chile dip coming later this week and then I SWEAR I’ll take a break from cheesy Mexican-like recipes and lay off the tacos.

Ooooh but wait. I know what you’re thinking. You’re freaking over this ingredient list because it looks straight up ridiculous. But don’t let it scare you off! Most of the bullet points are spices. Marinating the veggies in this mix makes them sweet and savory and spicy and ones grilled, a bit caramely and perfect for eating right off the plate.

This is a surefire way for me to eat veggies, so it’s pretty much a guarantee that the rest of the universe will love them this way too. Winning. Even I’m exhausted from those exclamation points.