And now for one of my favorite traditions! aka, I don’t know how my kitchen didn’t blow up this year.

Yes, I say it every year in my way-too-dramatic fashion, but THIS year was the worst.

Adding a baby to the mix threw my balance way off as expected – and I’m still trying to regain it. In the early days, I would plan to test a fantastic recipe or two only to have a Max moment that needed my full attention and lasted three hours longer than expected. I was super rushing to make things in a fraction of the time that I used to have and this meant: massive kitchen fails.

It was funny. Not at the time, I may have melted into a puddle of tears on occasion. But now! It’s fun to look back on. Also, this is, like, 1/48th of the disasters that occurred this year – the ones that I was lucky enough to remember to capture. Ohhh good.

Also, for years of previous embarrassing disasters, you can see

And now, let’s talk about my frenemy. PIE. 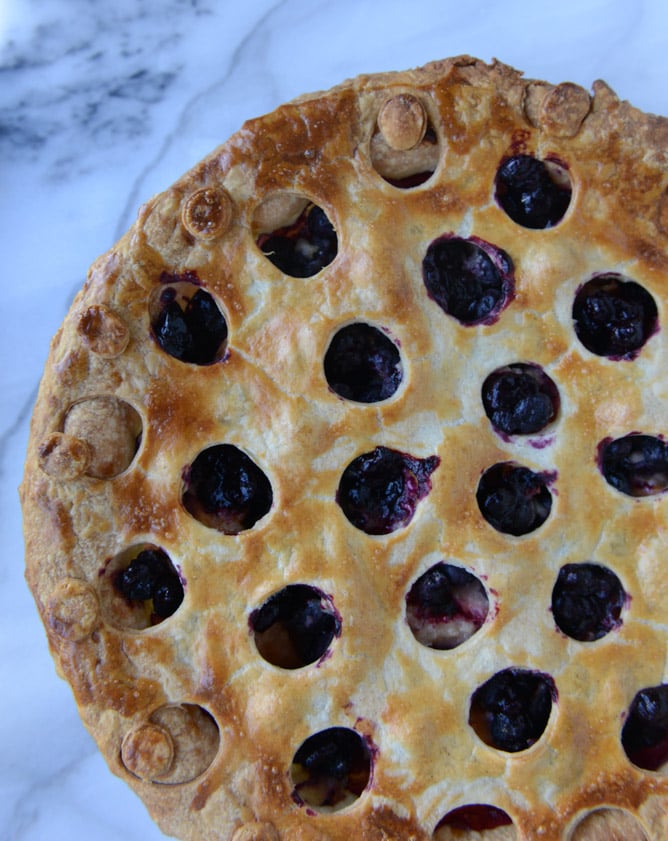 To make a good one, I’ve decided that you really need three things: time, patience and desire, of which I have none. I want to be all cool and hipstery and make an instagram-worthy pie (um, hello, why ELSE would you make one?) but I cannot.

I seriously think this looks like a scary halloween mask, like a Jason mask or something, something like leatherface with holes in it. It’s 100% awful, and the filling didn’t exactly turn out either.

Scratch that, it didn’t turn out at all. I’m pretty sure it still had chunks of flour in it. Which I tasted. Of course. 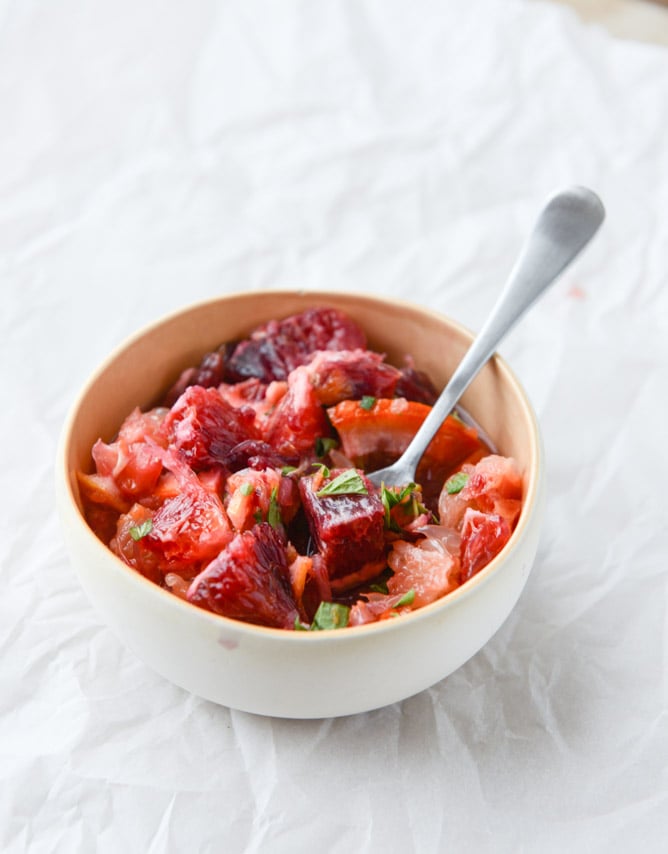 Back in early winter, I made this triple citrus relish that I saw in an issue of… not sure. Maybe food and wine? Maybe bon appetit? It sounded pretty fabulous but my execution was terrible, right down to the part where I decided to serve it with… wait for it… CHICKEN. 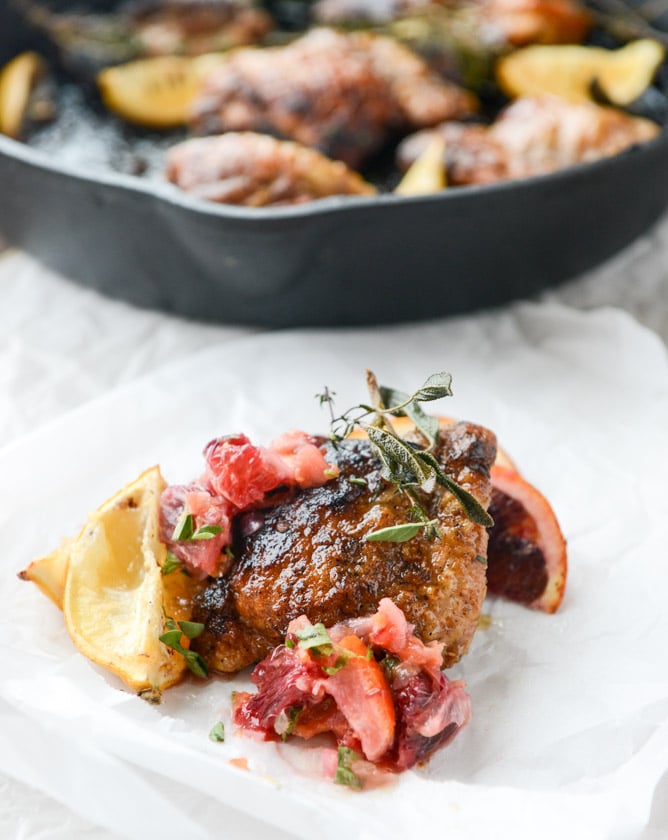 The relish had rind in it, it turned out terribly, I don’t know what I was thinking with the herbs and then I added way too many onions. The chicken was soggy-fried, absolutely horrible but I tried to save it by roasting it AFTER frying it and then roasting the lemon wedges too.

I tasted it and was all well this isn’t too bad, let me take a pic and I’ll test it once or twice more before sharing.

And then I looked at the pic and was like, what? This is horrifying. It really was.

I mean, do you want to eat a bowl of oranges and onions on soggy fried chicken? Sounds delish. 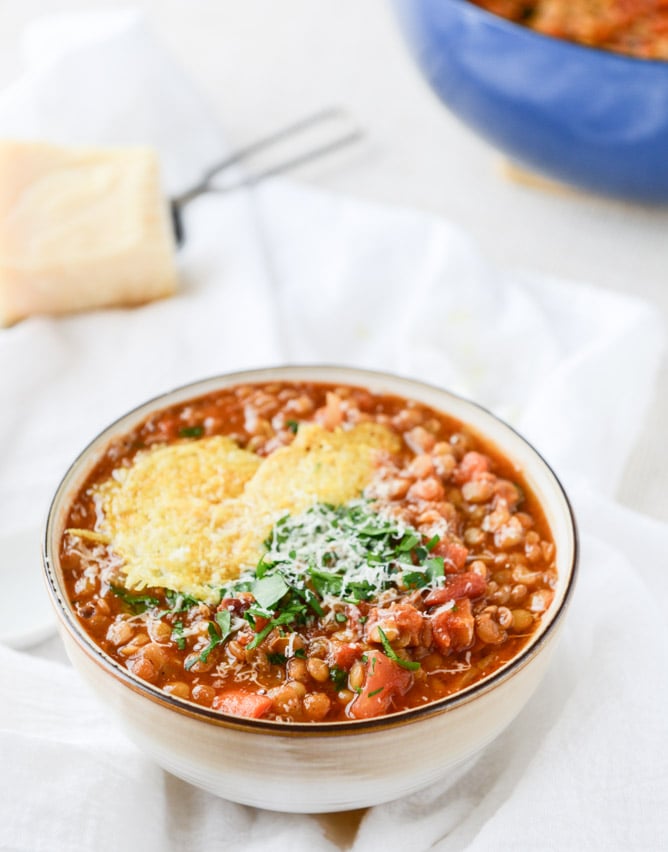 No words for this hideous mess of a soup.  I made a bacon and lentil soup (why? lack of sleep in the newborn stage?!) then topped it with parmesan cheese crisps and BASIL. Why why why.

Again, it was so gross. Too many flavors, such a literal hot mess. My brain was fried. 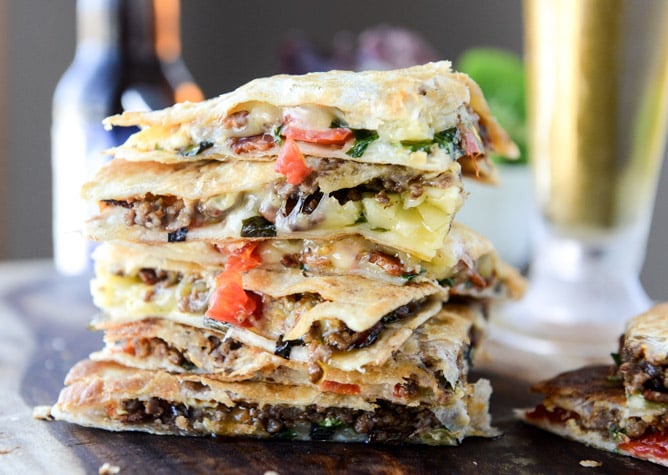 I’m pretty sure that bacon cheeseburger quesadillas have made the recipe disaster list before – yet I keep on making them because apparently I’ve had a lobotomy.

As gross as it may seem, it tastes pretty darn close to a cheeseburger and therefore, is pretty darn delicious, but photo wise? The worst. Just no. 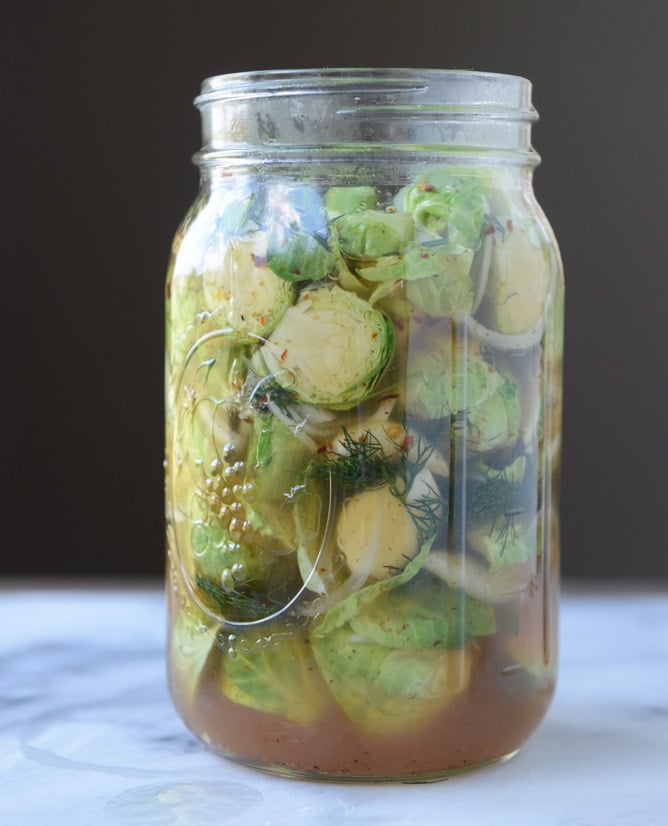 One of my saddest fails of the year was pickled brussels sprouts. I did a million things wrong, from not “canning” the thing properly because I was lazy, to making up my own mixture, to using too large of sprouts and then letting the mess sit in my fridge for over a week.

I had gorgeous high hopes for bloody marias and cheese plates but just ended up with hard-as-a-rock vinegar balls. Depressing. And very gross. 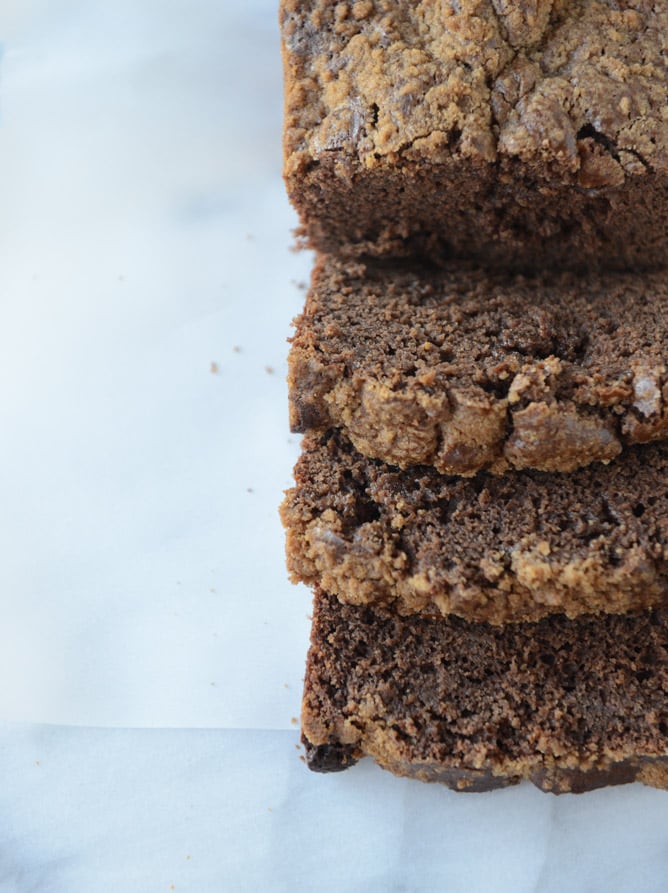 Ooooh ooh ooh the time that I thought chocolate coffee cake could be a thing?

It could not. It was so BLAH. 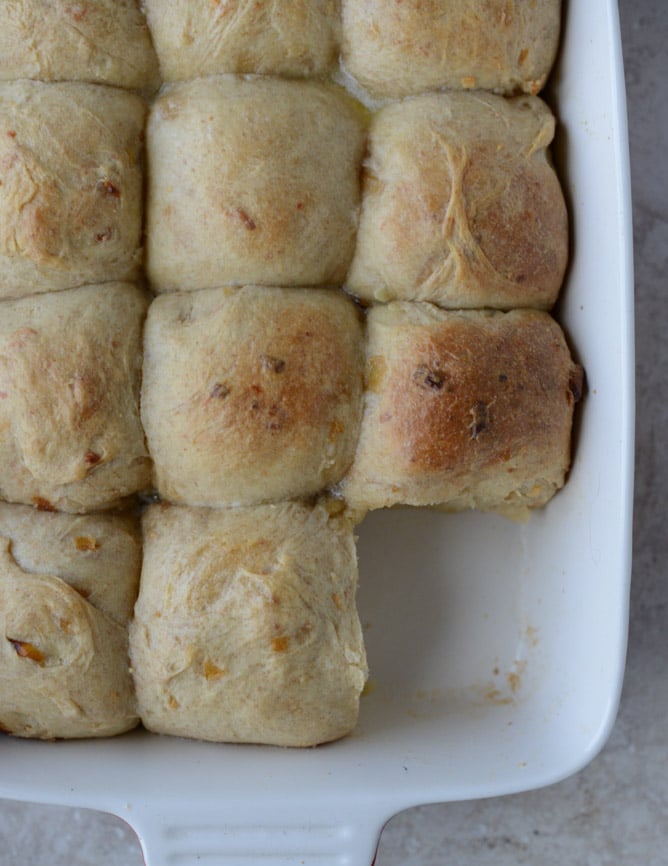 For Thanksgiving, I really wanted to make you french onion soup rolls! I made my own rolls with onions that had caramelized for three hours and an entire block of grated gruyere. But my recipe brain fell off there when I didn’t know just HOW to cover the rolls with a delicious soupy cheese blanket and still have them be, well… ROLLS. And not a gigantic slop pile in a baking dish. 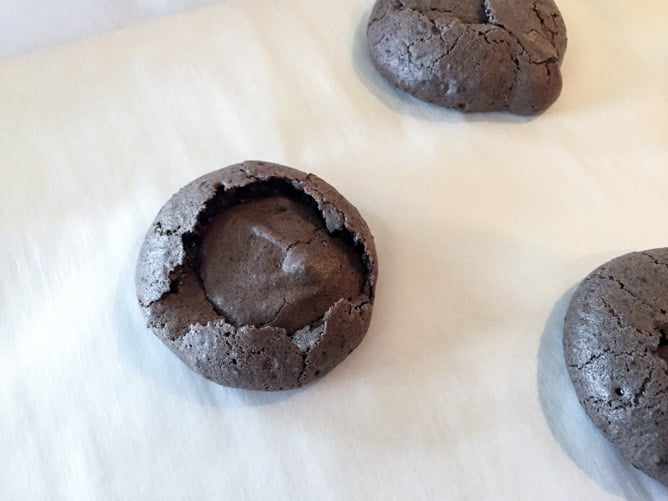 Oh the macarons. How many batches did I make? Maybe 40? Definitely 20 in the months of November and December. It was out of control and while I’ve heard that chocolate macs are especially difficult, I had multiple other flavors fail too.

The obscenties running through my mind after batch 15 failed and I had let them sit, then didn’t let them sit, overmixed then didn’t overmix, made them on a low humidity day, banged the pan against my kitchen table… it went on and on. Just decided to bang my head on the table instead. 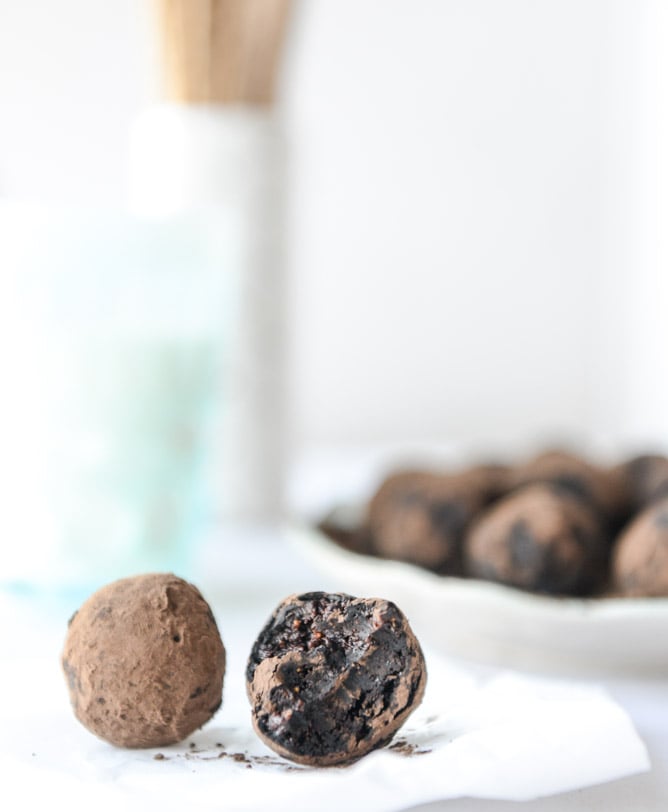 Finally, I tried to be all cool and trendy here and make some “truffles” out of dried figs and reeeealllly dark chocolate (like 90%) instead of using dates like all the cool kids do. These were absolutely pitiful. And tasted so, so wrong.

There were so many more in 2015, but there are the biggest and best that stuck out like sore thumbs. And of course, just last week I dropped an entire gallon of homemade amaretto on my kitchen floor less than 24 hours after making it, so major fails happen every single day. More like multiple times a day right now, since I’m still trying to maximize my time.