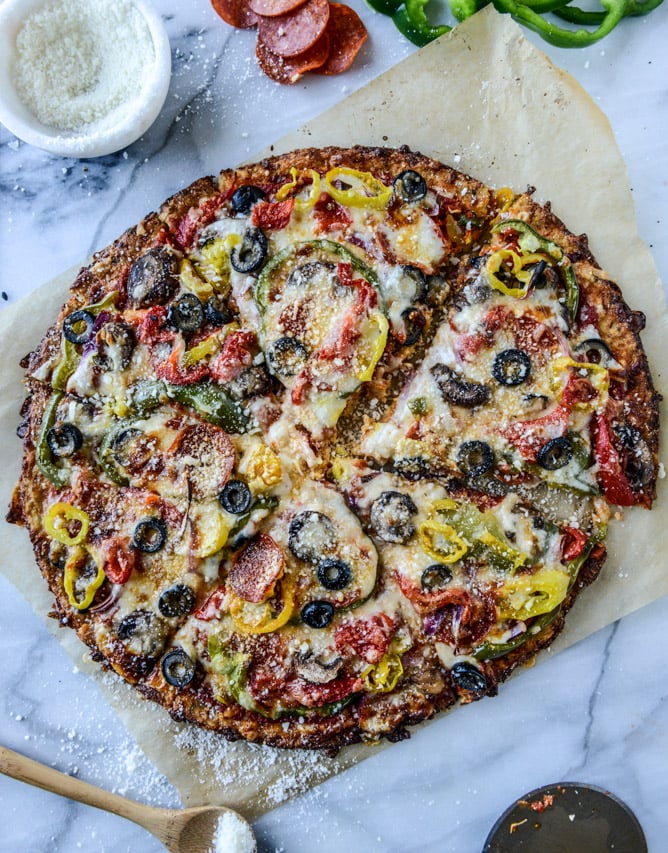 Wait! Don’t go. We can make it work. And compromise.

There’s still a lot of cheese. And you can add bacon and make up for the cauliflower. 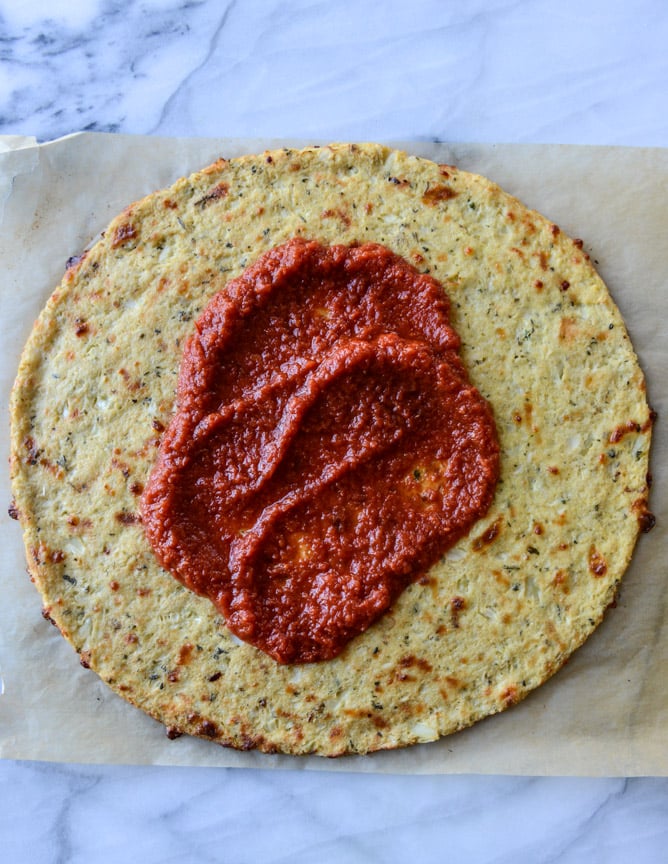 It’s not like we eat cauliflower regularly, heck I can’t even say that we eat it OFTEN. But the thing was that years ago – and I’m talking YEARS, probably twelve? – I tried cauliflower crust and it was absolutely horrible.

I wasn’t reading blogs at that time. I only found recipes in cookbooks or in my mom’s recipe box and maybe sometimes somewhere on the internet, but never a regular blog. Pretty sure that somebody at the gym gave me that recipe or told me about it. I didn’t care for cauliflower at the time and I’m almost positive that I took the cauliflower, pulsed it in the food processor, didn’t drain any liquid, combined it with egg whites and salt and tried to bake it. 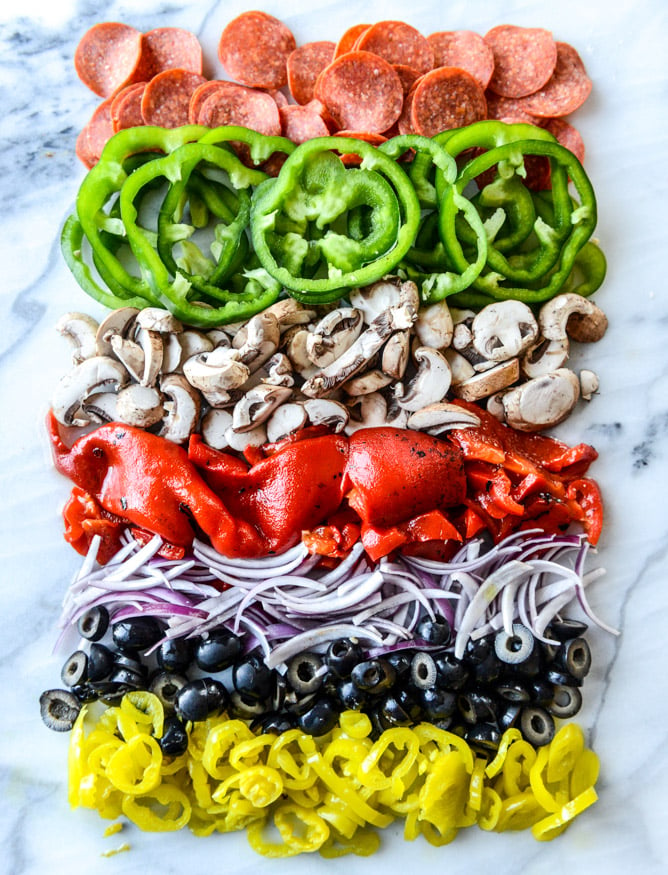 So when the cauliflower crust came on the scene, I was all “absolutely not, no no, never ever in ten billion years and then no again.” Constantly.

I ended up trying the recipe for Tasty Kitchen, originally found here on Michelle’s blog, and actually… liking it. Enjoying it. It was even semi-crispy like traditional pizza crust. Not the same at all, but much closer than I’d ever come. 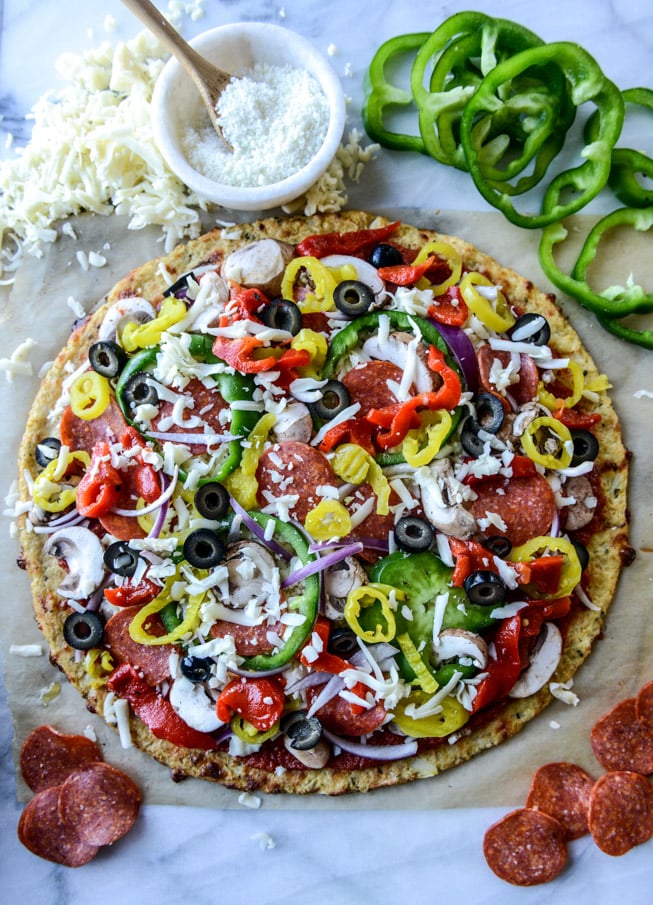 Here’s one of the things that gets me about the cauliflower crust. I think it’s a fantastic option if you’re gluten free. Fantastic. It’s definitely a fork-and-knife pizza (unless your slices are super short), but that doesn’t bother me. But the crust needs some cheese to stick together and for the flavor of… not just cauliflower. I have tried multiple crusts and no cheese? It doesn’t work for me. In texture OR in taste.

So lots of cheese in the crust and cheese on the pizza? That’s a cheese lover’s (hello, me) dream and I don’t hate it. But I would never call it light. Or super healthy. I actually find it to be a bit dense and heavy (in a not-so-bad way, if that makes sense) – and it has loads of flavor.

But a healthier, lighter, less caloric option? Not always the case, in my experience.

Then again, I’m the cheese QUEEN. (P.S. though, there IS a dairy free version of this exact crust that you can try!) 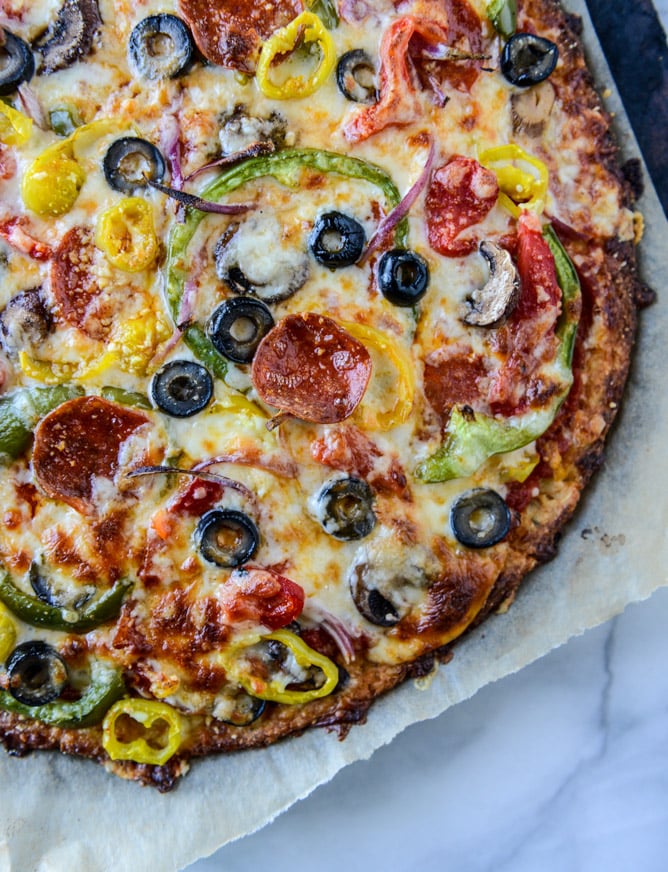 Last February, this crust came back into my life because I taught a cooking class about pizza and my favorite crust varieties. This made the list so we had a gluten free option but also so we had a different type of crust, and I had forgot how good it was. In fact, some members in the class deemed this crust their favorite of all the pizzas we made.

Which in my book, is crazy. But it IS loaded with flavor, cheese and when done right – is crispy and crunchy! 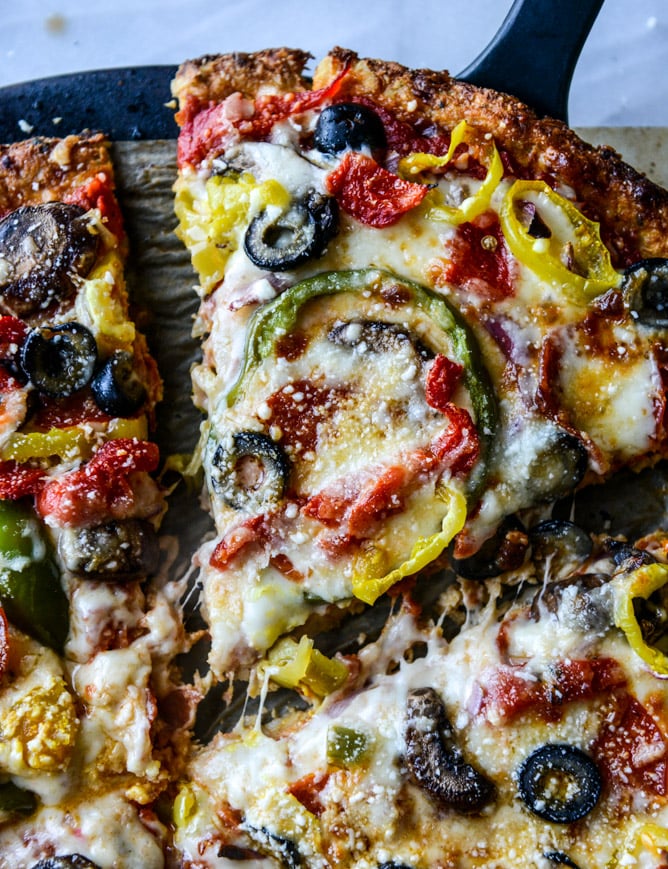 Now, the toppings. A supreme pizza? This is super new to me.

It should come as no surprise that I loathed even the appearance of pizza supreme when I was growing up. Because so.many.veggies.

That’s precisely why I wouldn’t touch it – after all, I’ve ranted before about my appreciation for plain and only plain pizza. Pepperoni MAYBE, but never vegetables.

The only thing that remotely appealed to me were the olives, which I freaking love. And funny enough, I feel like the olives are what turn MOST people off from the supreme pizza. At least it does for Eddie. And my brother. They will gladly eat everything else, but no olives.

Meanwhile, I’m over here wondering when an all-olive covered pizza will debut in my life. Soon please.

Double up on the olives for me. 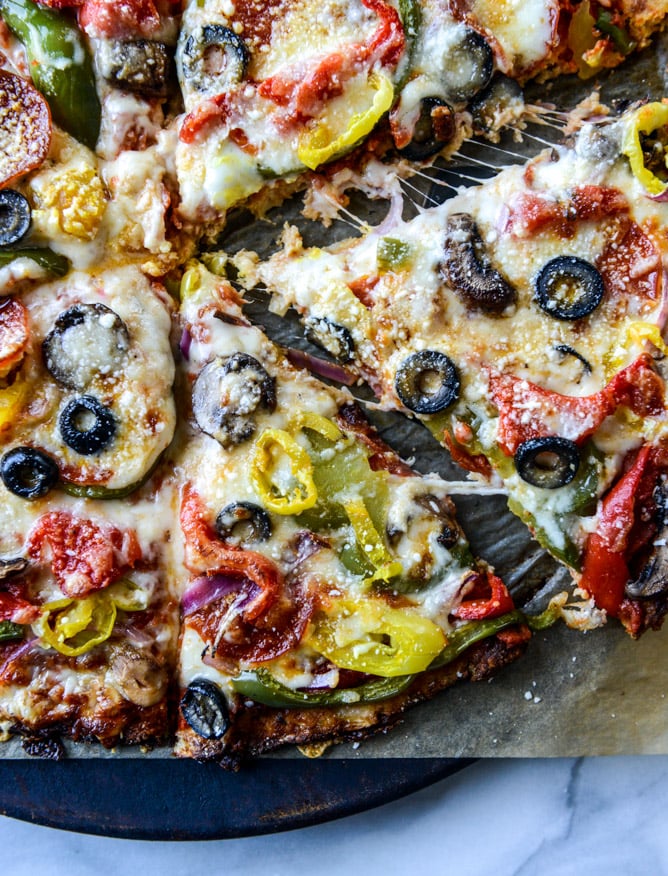 So last fall, we were ordering pizza on a Saturday night and my sister-in-law wanted the dreaded pizza supreme. Everyone gave her a hard time and we were like THAT IS SO GROSS and then the pizza came and… we all ate it.

In fact, I think out of four different pizzas it was one of the first to go.

It was so delicious. So SO wonderful.

That inspired the topping for this crust and while I knew I wanted to make a different sort of cauliflower crust pizza since I’d already made a plain one, I was super lost. Enter pizza supreme! I almost even added anchovies. Buuuut I thought that cauli crust, olives AND anchovies may be crossing the line. Crossing your line.

But if you’re gonna cross it, go all the way! So what else would be on YOUR pizza supreme? Please say bacon. 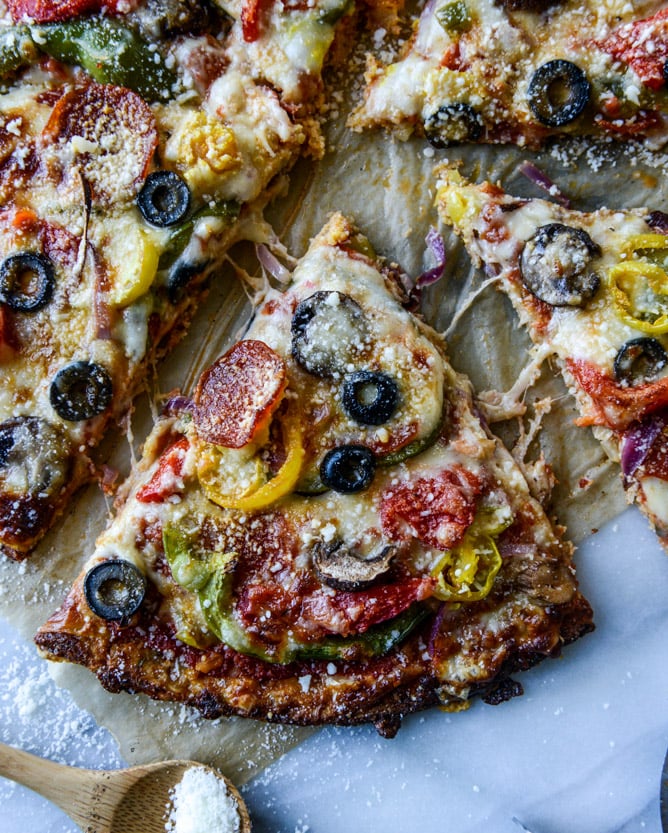 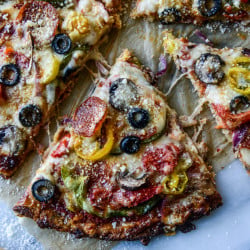 Print Recipe
5 from 7 votes
Leave a Review »
Yield: 1 (12-inch) pizza
Pizza Supreme on Cauliflower Crust
Total Time:
1 hr
Ingredients
crust
pizza
Instructions
[crust from the lucky penny blog (check out her step by step pics! and learned from when I featured it on tasty kitchen.] I want all the bites.