This is so much better than the one time I dipped a holiday leftover milk chocolate bear in the peanut butter jar for breakfast. The first decision of the day that I stumble upon while I’m peacefully waking up from a night of slumber (read: reaching for my phone like the psychotic, tech-addicted person that I am and scrolling through every social media outlet possible to get my news fix like it’s the new newspaper) is this: breakfast flavors. Sweet or savory?

That is the question. This is a smoothie that I’ve been drinking since the first few months after Max was born. At least, some sort of version of it.

While I absolutely love the flavor combo of coffee and chocolate (mocha coconut anyone?!), it’s super difficult for me to enjoy almond milk or coconut milk in my coffee. It’s practically like adding water to it. I like adding cream or daily milk because it gives the coffee a creamy consistency. The almond and coconut milk don’t change the consistency and I’m just like… UGH. GIVE ME ALL THE CREAM.

So sometimes if I don’t want to do dairy in my coffee, I’ll throw it in a smoothie. After all, the first time I EVER consumed coffee was in college during the very first release of the mocha coconut Frappuccino at starbucks (it’s never tasted as delicious since then!), so coffee in cold, frosty beverages is somewhat of a staple in my life. 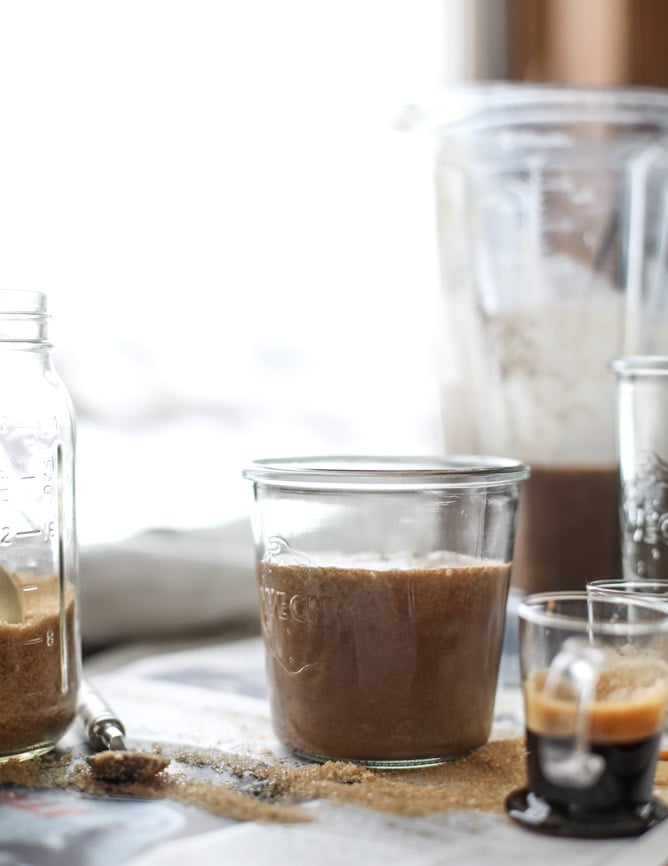 It’s so ironic that I’m sharing these shakes today because I haven’t had one single sip of coffee in five whole days. I mentioned in my Tuesday Things that I didn’t have it for a few days thanks to having the flu and not wanting to ingest a darn thing, and I decided to see if I could go a few days without it. I mean, I know that I totally can. It’s not like I even drink two full cups a day. But!

I miss it so much – I miss the taste and just the… ritual of drinking it. Does that make sense? Sometimes it made me feel like complete garbage though. Especially in the afternoon. I’m trying to determine the cause of that (occasionally I have it on an empty stomach? Too much dairy plus sugar?) and then bringing it back and enjoying a cup to it’s full freaking potential. I can’t waaaait. Those little chocolate sprinkles up there? They are a combo of chocolate covered hemp seeds and chocolate covered chia seeds which I can’t get enough of right now. I’m obsessed with their snackage uses, throwing them on everything from toast to yogurt to smoothies, apparently. They are crunchy and delicious.

And health food, so of course.