No really… it’s bad. Do you want to know how bad it is? Well.

I’ve made ice cream like, multiple times per week, for WEEKS. I made this ice cream the day after I made the buttermint ice cream, and since that was two weeks ago you can only imagine how much more ice cream I’ve made since. My freezer is overflowing and my mind… my mind is totally one track. It’s all I can think about – my next flavor, my next creamy adventure if you will. Ew. That sounds weird. Whatever.

But I’m half tempted to turn this into an ice cream only blog because my brain won’t stop churning… pun completely intended.

And since I can’t turn this into an ice cream only blog without 1. literally drowning in heavy cream and 2. annoying all of my invisible internet friends, I’m combining two of the things I love the most into one flavor: toasted marshmallow and coconut milk.

Oh and a few of you told me that yesterday was national toasted marshmallow day? Again, who the heck makes up these holidays and no, I didn’t know because I’m not hip. Not hip at allll. Let’s celebrate today, k? You know who’s not all about this ice cream thing? My husband. Okay wait… I shouldn’t put it that way. He loves ice cream. He actually loves ice cream more than I do. I find him closet-eating ice cream straight out of the container right over the kitchen sink almost as much as I find him shoveling chocolate chip cookies into his mouth with diet Coke in hand.

I didn’t expect him to like the buttermint ice cream because he… dun dun dun… doesn’t really like mint. Oh, except he likes the “spiciest” mint gum that BURNS THE HECK OUR OF YOUR MOUTH. Ouch is all I have to say about that. But surprise surprise… he did enjoy the buttermint. And then one day later, as I forced him to taste this ice cream (which was a feat in itself since he just had his first s’more last month and realized he actually likes marshmallows), his response was “it’s good… but I just really wish you’d make chocolate ice cream.” Um. What? Never once in our lifetime together… in our itty bitty relationship… has he EVER ordered, bought or scooped chocolate ice cream. Ever. He is the king of either plain vanilla with fruit (um hi, totally boring) or cookies and cream. Always. This never changes. And I’m definitely that annoying person that always tries to get him to choose new! and creative! choices while he is in starvation mode (read: hasn’t eaten in 7 minutes) and just wants some stupid food.

So what does this mean? It means I’ve made more varieties of chocolate ice cream in the last two weeks that I can count. Breakfast? Spoonful of ice cream. Made cookies? Squish ice cream in between. Coming to visit? You absolutely cannot leave this house without ice cream. It’s cool though… he’s happy, and with my marshmallow coconut milk scoops I’m happy too. I might have enjoyed this even more than the first batch of buttermint because it stayed super creamy from the coconut milk. No, the marshmallows don’t really harden and they add this awesome chewy texture to the ice cream which I can only assume would be made even better with ripples of fudge and peanut butter and pumpkin and graham cracker. But that’s for another time.

Because you know… exactly what I need to do is make more ice cream. 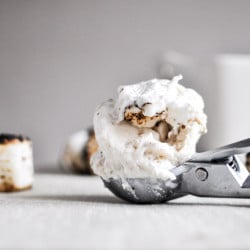 You may have noticed we got a little facelift this morning! Tell you more about that soon.