This is the first year that I’ve bought these adorable little pie pumpkins.

I think they are so much cuter than those other small decorative pumpkins. I didn’t want to butcher them, but I sacrificed two for this soup.

I realize that there is a whole slew of you out there that is sick of seeing pumpkin. I won’t lie. I’m a little sick of it too. But this soup doesn’t need pumpkin. I simply used the pumpkin shells as a vehicle for the soup. And I didn’t want to waste some of the pumpkin that I scooped out, so it got pureed in the soup.
But the best part of the soup is the apple and the squash. I suspect that some sweet potatoes would be a delicious addition as well. 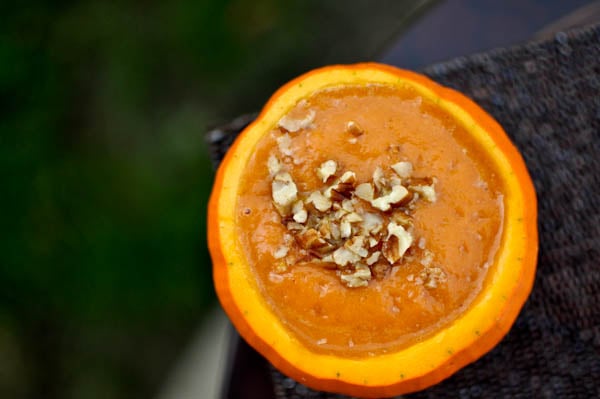 I baked the pumpkin for a few minutes to soften up what was left inside, but not too long so it would still be firm enough to hold the soup.

I wasn’t sure if I would love this dish, but it was fabulous. The apple adds a bit of sweetness and I loved the addition of the sage. Sometimes I am scared of fresh herbs, like sage, because of their resemblance to green veggies. I know. I’m odd. I also threw in some half and half to make the soup more bisque like. And the crunchy, toasted pecans on top? They are perfect.
The only way this would be more perfect is if it had bacon. Why didn’t I think of that sooner? 2 apples, chopped (with skins on)

Lay chopped apples, squash and pumpkin on a baking sheet. Drizzle with olive oil, sprinkle with salt and pepper, and toss with sage. Sprinkle chopped garlic on top. Roast for 20 minutes, toss, and roast for another 15 minutes.

In a blender, add 1-2 cups of squash mix with 1 cup of broth and puree. Transfer to a large pot and continue with remaining squash and broth – this will most likely have to be done in batches depending on your blender size. One the soup is in a dutch oven or pot, stir in smoked paprika, season with salt and pepper, and stir in half and half. Cook for 20-30 minutes on low heat.

Serve in bowls (or pumpkin bowls) and garnish with toasted pecans.

So how sick are you of seeing pumpkin? Let it all out. I might take a pumpkin break. After I eat 3 pumpkin cookies for breakfast.

« Previous PostWhy I Don’t Do Crafts.
Next Post » Help Me.