I usually try to diversify my recipes a bit throughout the week, but clearly this week was having none of that. I was just too excited to share this recipe with you! Let me tell you this: it is versatile. I have made these twice now with butternut squash and pumpkin, with the recipe being the same, and they have both worked out great. I also think that mashed sweet potatoes would work, but I am still in the experimenting stage.

I topped the waffles with some greek yogurt that I whipped a bit with honey and cinnamon. To be honest, I am not a huge fan of maple, including maple syrup. The only real maple product I’ve fallen in love with is maple butter, to which I have been known to devour a few tablespoons in one sitting. So decadent.

I’m sure that syrup would be fabulous on these, but I prefer eating them with a thicker, creamier topping. It’s not like it really matters anyway. They are only on my plate for a total of five seconds. 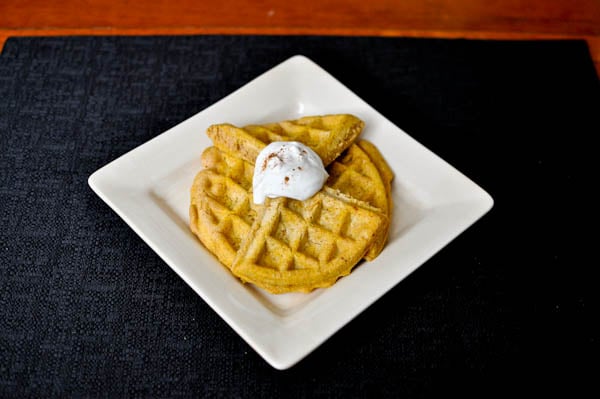 Preheat waffle iron. Combine dry ingredients, then stir in squash, egg, milk and vanilla. Scoop about 1/3 cup batter onto waffle iron and cook until heated through.

Top with cinnamon cream and a sprinkle of nutmeg.

Mix ingredients together until smooth. Add to waffles.