I think I need bigger bowls. On Tuesday night before I was going to bed, at uh… midnight, I took out my contacts to sterilize them, washed my face, brushed my teeth, slathered moisturizer on my skin and then… put my contacts back in my eyes. You know… for bed?

This may not seem like a huge deal, but if you have to sterilize your contacts like I do, then you know that they absolutely cannot touch your eyes for at least 6 hours once they hit that solution. As I was screaming in pain with no one to help me since my husband was out of town, I managed to claw my eyelids open and practically scrape the contacts from my eyes.

I don’t know what had gotten into me, but it was like when you wake up feeling bright-eyed and bushy-tailed with boatloads of energy, take a shower, eat breakfast, get dressed, put on makeup, then get in the car to go to work and notice that the clock says 1:54.

We’ve all be there, right?

WHY DID I STUFF MY CONTACTS IN MY EYES AT 12:07 AM?! It wasn’t like I had just woken from a deep sleep. Or a deep bottle of wine. Or rum! I know what you think of me. Then I couldn’t fall asleep because my eyes were on fire. The only thing that kept me alive (drama!) was blinking 436 times per minute. And for the last two days, my eyes have appeared as though I’ve been ingesting large amounts of questionable substances… like all day long.

By 3AM that night, I was starrrrving. I was past the point of exhaustion and still couldn’t comfortably keeps my eyes opened or closed, so I hoofed it downstairs and sank my teeth into one of these fluffy rolls. I had made them on Saturday in between my pajama wearing, wine drinking, and related laying around, and they still tasted fresh in the middle of the night three days later. They soothed me enough to eventually pass out and forget about the flames under my lids until about 6AM, when I simply wanted to shove my head into a barrel of ice. Even though I crammed way too much dough into a little bowl, seeing dough rise still makes me giddy. Especially when it spills over the dish and makes the kitchen smell all yeasty. In a, uh… good way.

I’m not even a bread person (much more of a consume-an-entire-cheesecake person) and I couldn’t stop with these rolls. We ate them with chicken chili and spread them with butter and drizzled them with honey and shoved them in our face and made them our… you know. They were like sweet potato pillows. I want to bounce up and down on them. 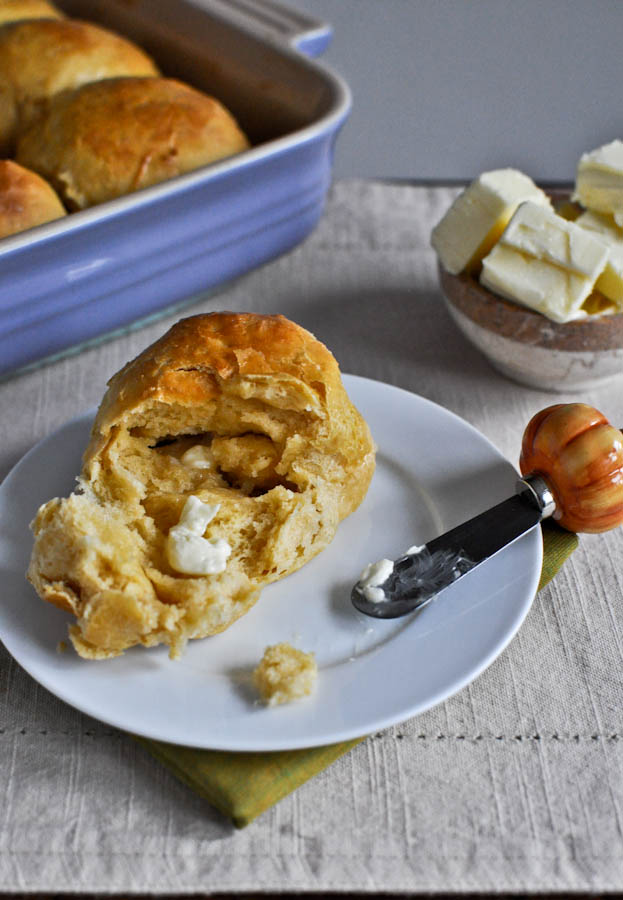 You can eat all that butter in that bowl there. Because I said so.