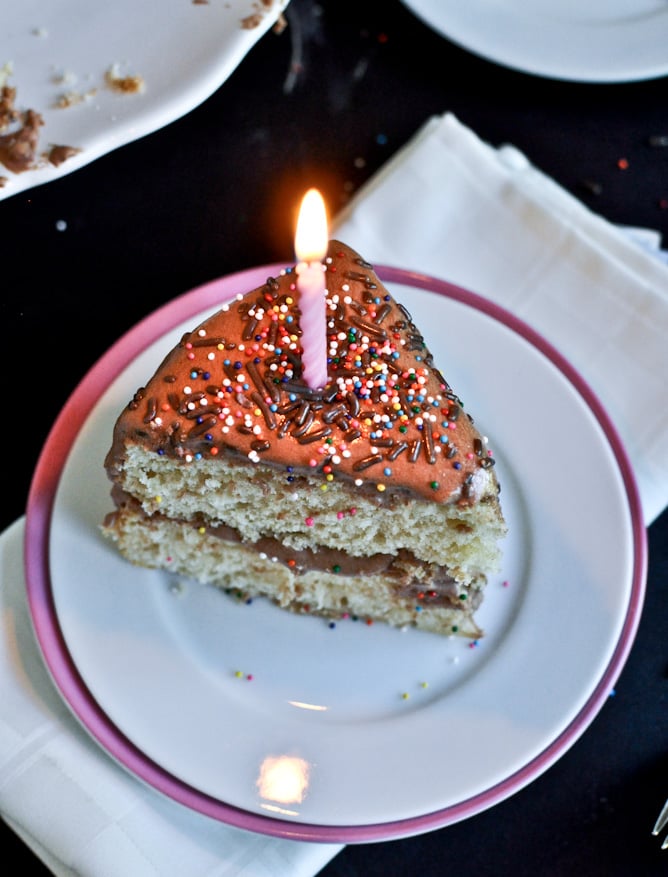 And because it’s my MOM’s birthday… like, the person that BIRTHED me, I broke out the big guns… Ignore my dirty stove. I was having a meltdown yesterday. No… really I was. Un-cake related. Waaaaay back when, like many moons ago, I started this blog and three days later, I wrote a post about six things my mom was right about. Okay, maybe it was like 15 days later, and we all know that moms are usually right about more than six things, but whatever. The fact is that while most of my early blog posts make me cringe until I can’t breathe, then simultaneously curl into a fetal position and never want to show my face again… I still love that post. IT’S SO TRUE. So much of it bears repeating. So I’m going to repeat some of it. Sort of.

Because really, my mom has been right about soooo many things. Fact.

Like… taking deep breaths. I don’t think it’s any secret that I’m a supercalifragilistic psycho stressed out anxiety-ridden headcase like 89% of the time. Taking deep breaths was the only way to get my crazy self calmed down in those early years, and it’s still true ’til this day. I might have stood in my kitchen yesterday mid-panic attack and taken about 45 of them. Desperately needed. Hot turkey or roast beef sandwiched in between two slices of super soft white bread and ladled with piping hot gravy? YES. And yes and yes.

Who would’ve thought she’d be right about having my own phone? For years I begged for that plastic hunk of junk that DJ Tanner talked to Kimmy on in every Full House episode, as well as some clear, wire-exposed hot pink Radio Shack phone, and basically wanted to die when it never appeared on Christmas morning. And the best part was that I wanted my own phone NUMBER. Seriously, what tween needs their own phone number? What was going on? My mom was totally ahead of the curve because now, I don’t even HAVE a landline. She definitely knew what was up back then.

Annnnd leg shaving? She didn’t let me do it when I wanted to start, so I did it anyway, and I think you all can join me in a resounding dubayu.tee.eff. Is there anything more annoying, more time consuming, more inconvenient? She was completely right. Once you start… blah blah blah. The best life lesson ever: fry everything in bacon grease. Keep the bacon drippings… ALWAYS. Store them in a container in the fridge. Saute everything in it. And I do mean… everything. Where do you people think I learned this?

Her absolute lack of knowledge when it comes to technology? I dig it. She’d rather be outside planting flowers and in that sun then holed up in the house on some computer or with a cell phone jammed next to her brain. She doesn’t know how to check email. Or voicemail. We should do this. Right?

Not gonna lie, I was pretty jacked when my mom wasn’t falling for the “oh but I’m going to sleep at _____’s house tonight and I SWEAR there won’t be boys there.” Um, no. I’m so glad she didn’t let me participate in co-ed sleepovers when I was like, 15 years old. I hope I am so totally uncool that I do the exact same thing. Forever. 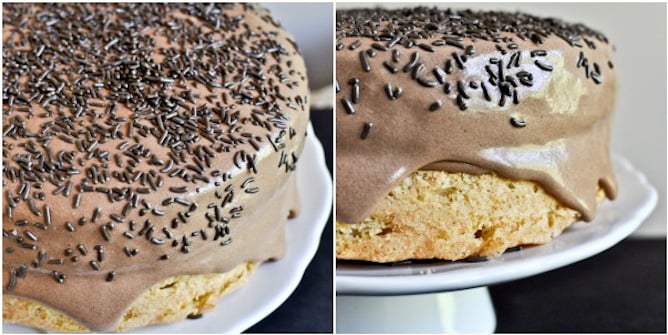 She definitely does some crazy things like hoard expired cake mix and instant jello, and she is probably the only person I know who orders white bread with her double decker club sandwich at the Cheesecake Factory and considers corn on the cob slathered in margarine and salt a vegetable, but she is pretty much single-handedly responsible for my head being screwed on somewhat straight. If you can even call it that.

So… a cake it was. Plain old yellow cake with this chocolate frosting straight from Mother Lovett’s recipe arsenal – and let me tell you: it is fudgy. It’s different… in that you cook the mixture and let it cool then whip the heck out of it (hence the lighter color)… and it doesn’t get as sturdy or solid as a traditional buttercream, but it’s perfect for throwing on top of cakes and cupcakes in that casual but oh-so-cool way. Which is totally me, considering I have zero patience to frost a real cake the real way. This just… works. And covered in sprinkles… it’s totally mom-worthy. Preheat over to 350 degrees. Sift flour, salt and baking powder together in a bowl and set aside.

Beat butter and sugar together in the bowl of an electric mixer until light and fluffy, about 2-3 minutes. Add eggs one at a time, mixing fully until each is combined, then add vanilla. After the mixture has come together, add in half the of the dry ingredients and mix. Add in the milk, then the rest of the dry ingredients, mixing until just combined.

Pour batter in two 8-inch buttered and floured cake pans. Bake for 23-25 minutes, or until cake is not jiggly in the middle and golden on top. Let cool completely before frosting.

Add milk and chocolate to a large saucepan and heat over low heat, stirring constantly until melted. Add in sugar, salt and corn syrup, then continue to stir until mixture comes to a boil. Once it’s bubbling, let simmer for about 5 minutes, stirring off and on, making sure it doesn’t boil oil. Remove from heat, stir in butter and vanilla extract and let cool COMPLETELY. You can stick it in the fridge or freezer if necessary, but it must cool completely. Once cool, add to the bowl of an electric mixer and beat until slightly thickened and light in color. Frost cake or cupcakes as desired – keep in mind that this is more of a “saucy” frosting, a bit runny, and will not firm up like buttercream. It works great for draping on a cake and refrigerates well!

And oh yes, why I did serve my mom a layer cake with two slices missing. But… the apple doesn’t fall far from the tree.