This is so appropriate. You know, this time of year when there are approximately 740 king-size candy bars in my house and then someone decides to MAKE their own candy.  That someone.

By the way, you probably think otherwise but it’s surely my husband who insists on handing out the massive sugar-coma inducing bars to trick or treaters at our house every year. It’s like his thing. He doesn’t really want to socialize with the neighbors but he wants everyone to think we’re cool enough to give big ass candy bars. I don’t disagree at all – my brothers and I basically wanted to throw a rager when we discovered the houses that gave out the big candy bars. But I’d be cool with some normal size peanut butter cups or something like that, for sure.  You picking up what I’m throwing down???? There is a certain person who has to work from their house on November 1st when there is a neon purple bowl (of course) filled to the brim with chocolate and peanuts and caramel and crisped rice and peppermint and omgallofthecandy. It’s like a taunting lesson in self-control. IT’S SO MUCH FUN! So you’ll always hear me say that my favorite candy bar is a good old snickers. And it definitely is.  It’s my classic, predictable choice. BUT.

Then there are mallo cups. They are in a whole other league for me, almost a little sugary delicacy because I only ever got them once a year at Halloween. What is ridiculous because I’m pretty positive that they are or were “manufactured” (oh that just sounds delicious) only an hour or two away from where we live. They just happened to be that certain candy that I nearly forgot about every single year until I spied one in my pillowcase dressed in my full out Jem costume.

You know the deal –  how I used to scour my brothers’ candy treasures for snickers bars… but everyone freely gave up their mallo cups. What the what? It blew my mind because they are so darn good. Even my husband was like, “ugh mallo cups? Those were disgusting.”

UM NO. They are perfect. Perfect little marshmallow chocolate pillows. It should come as no surprise that I go nuts over them since it’s simply a gooey center of marshmallow cream. Only go a little bananas over that. I think it’s the touch of coconut that throws a lot of people off, but that’s obviously not an issue with me either. I’m not sure that I’m as obnoxious with anything as I am with coconut.

And bacon. But that’s it.

While I’m definitely not suggesting handing out homemade Halloween candy (would you eat it? I mean, I would never eat it. I’m a giant scaredy cat. My parents would probably never let me eat it back in the day either.), these are a super fun treat to make for your friends or family on this spooky holiday.

Stashed in the freezer. On hand for all of time.

Why the heck not? 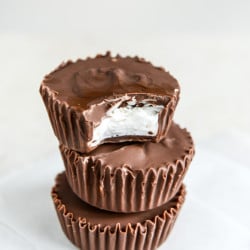 Yes. This is how we should do Mondays.