Because I cannot let anything in this world just BE. 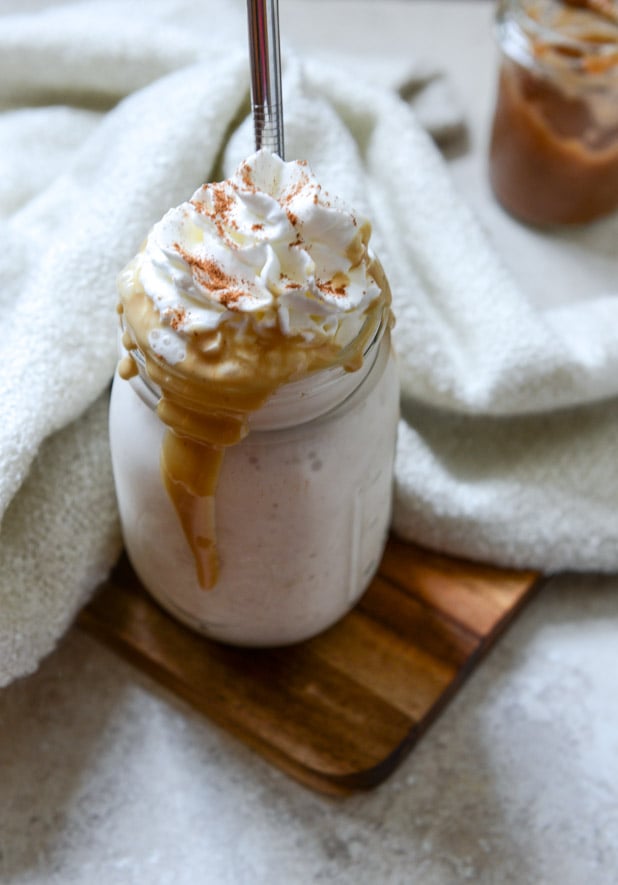 The thing is that I made some darn healthy apple butter.

I’m obviously in a butter mood, but whatever. Alternate sentence: what else is new. Question mark.

Apple butter with a touch of honey. No sugar otherwise. Just some sea salt, a touch of cider and a HECK of a lot of spice. My preference… I wanted things to taste like fall in a jar. Even left the peels on the apples for extra fiber.

Okay, for extra laziness. You caught me. So I have this awesome, good-for-you apple butter. And what do I do? PUT IT IN A MILKSHAKE.

SWIRL IT AROUND WITH ICE CREAM. DRIZZLE IT WITH MAPLE CREAM.

Hate myself. I mean, love myself. This past week we finally finished up the last jar of apple butter that we have been hoarding since August since we were in Michigan. I use the term “we” loosly because my husband may as well have labeled the jar with his name and secured it with lock and key. Not very nice, now is he?

No big deal, considering the vast amount of snacks I have to hide from him just so I can get a bite. Shhhhh.

The other thing is that all along I planned on making apple butter in my crockpot. Then. Someone broke my crockpot. By someone I mean me. Thanks for your replacement suggestions on facebook. After I dried my eyes I went in search for a new one and it was complete sensory overload that ended in a very large pumpkin scone and much consumption of emotions. So, no crockpot yet. I’m going to get a replacement lid for my broken one, but in the meantime I figure for as often as I use it, why not buy another? It seems completely logical since I HAVE ABSOLUTELY NOT ONE SQUARE INCH for another kitchen appliance. La la la la la. Apple butter on the stovetop it is. It only took an hour! Also, apple butter in a small batch. When I make a lot of something, it tends to go to waste, unless of course it’s chicken or steak and then the human garbage disposal takes care of it. I wanted just enough so we could enjoy it without getting sick of it.

Or you know, throw it in a milkshake so there was none left to spread on toast. Yield: 1 cup (or a little less)
Print Recipe Pin Recipe
No ratings yet
Leave a Review » « Previous PostPhoto An Hour.
Next Post » Currently Crushing On.