Our Favorite Beer Can Chicken.

Let me tell you about one of the best things I’ve ever done. 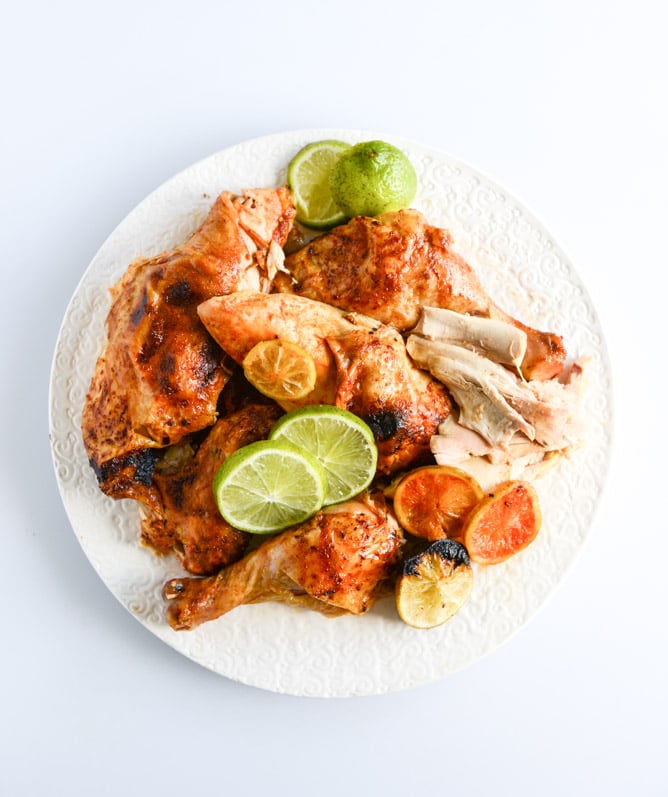 And no, it’s not this chicken.

Though I do beg the question of…

how does this photo below make you feel? I mean, let’s be real. Can you actually take this seriously today?

(also, if you’re anything like me all you can think of is Monica Gellar with a bird on her head.) Well. You have to.

Because the ACTUAL best thing I’ve ever done is teach Eddie how to roast a chicken. In fact, he asked me – which certainly means he must have been abducted by aliens that day. And I taught him – which miraculously did not come complete with divorce papers or even an argument – and now… now? He kind of makes them better than I do.

Because I can sometimes be rushed and am all oh just let me add olive oil, salt and pepper while he takes his serious time and adds spices and flavors and twines the legs and what not. Like he does it RIGHT.

Like he does it like he hasn’t been doing it once a week for four years. Because it’s pretty much been that way for me.

Regardless, it’s still one of our favorite things ever. Even if we’re sick of “regular” roasted chicken – I still make one each week because it never fails that I will use it in SOMETHING. Soups, enchiladas, tacos – all the things.

This version is a… “special” version, if you will. Special as in I will usually make a beer can chicken if we just want to eat roasted chicken for dinner with some good old sides. Be boring but not so boring. And if I’m being real, the true reason we enjoy beer can chicken is because ALL of the skin gets crispy and then we don’t fight over it. That’s the worst part about teaching Eddie how to roast a chicken. Now he steals all the skin. So. What kind of beer did I use? Bud light. Is that trashy? Do you think I’m trashy(er) now? It’s what I had and almost always the beer that I will use in beer can chicken.  My other available option was a vanilla porter which I didn’t think would float any boats. Just no.

The other reason I like to use Bud light is because it comes in skinny TALL cans! It means the chicken sits up easier, doesn’t fall down half way through, and in my own secret brain I like to think that it flavors the chicken more but I’m sure that’s debatable and you will tell me that I’m wrong. DON’T RUIN IT FOR ME.

But. Do not fear. You can use whatever beer you like that comes in a can. Whatever you like to drink – use it.

What else. This is obviously the oven roasted version. We like to grill this too but sometimes it’s April and still 35 degrees out. Some people freak over beer can chicken, saying it’s not safe because of plastic or dyes in the can. We’ve eaten beer can chicken for years and we’re still kickin’. Do your own research and decide if you’re game. It’s not something we do every week when we roast, but it’s a fun switch. Cliché moderation, you know?

We prefer limes over lemons. There is a time and place for lemons and this is not it, especially since beer is involved. Give me a lime all the time. I not only stuff butter and spices under the skin, but also lime slices. The lime, the beer, the makeshift little BBQ spice rub – GAH. So freaking good.

I don’t even want to say it, but it’s ridiculously juicy. Our Favorite Beer Can Chicken 134 Comments on “Our Favorite Beer Can Chicken.”