Hi hi! Time to talk about all of my makeup hoarding tendencies. And it’s summmmmer! Fall is probably my favorite time of year for makeup, but summer takes a close second. My skin is paler than pale and while I’ve finally come to grips with it and accepted it for what it is (read: I haven’t set foot in a tanning bed in seven+ years and hate myself for doing so earlier in life), I like to load on some self-tanner so I can participate in the bronzy glow of summer.

Not everything works on my skin tone since it’s so light, but I’ve found some favorite things that do with the help of a little St Tropez. In addition to my St Tropez love, I’m still going nuts over the bare minerals bare skin foundation, which I think is HUGE for me. It is so awesome and I’m thrilled with it. Currently only using it once or twice a week since I don’t wear a ton of makeup in summer, but when I do wear it, it’s great. I’m still going crazy over the alba daily shade – it’s my go-to daily lotion every morning to help keep me unwrinkly. I’m also still loving the too faced chocolate bar palette and my chocolate soleil bronzer, which I finally left out after four months of subjecting you to raving about it. But make no doubt about it – it’s forever good. AND since I got my hair cut, I’m finding that the kenra blow dry spray is making it dry in just a few minutes (which is incredible). I’ve also been using a little more dry shampoo than normal as I learn how to style it and give it texture and volume on top.

Now on to this month! I mentioned this hope in a jar SPF last month and wasn’t sure how sold I’d be once I was close to finishing it. Well, I’m about three quarters of the way through and I really am loving it. I use it every morning and even occasionally twice a day if I’m going to be back out in the sun later. If I’m going to be in direct sunlight during peak hours, I’ll use a higher SPF and my favorites for body are still coola and sun bum. I love both of their sunscreen lotions and sprays.

And! I’m still using this hope in a jar combined with the clarins glow booster self tan serum that I talked about last month. That stuff is GOLD. I’ve tried it with a few other moisturizers too and it just works with anything. I also had a sample of this supergoop eye cream with SPF 37 that I’m LOVING. I don’t always fall victim to the claims of eye creams (though kiehl’s avocado is still my fave night one) but was so excited that this has SPF. And since I sweat like a man and tend to get regular SPF lotion in my eyes, I decided to test it out. So cool. I want to try more supergoop creams! I tried a few of these tarte brazilliance self-tan face wipes because I freak over all things tarte. Years ago (like literally six years ago) I was using the tan towel wipes and really liked them. Then I bought St. Tropez and have no problem putting St Tropez on my face… except it has to sit for eight hours without any water/face cream/etc. I tend to self tan at night and still want to use moisturizer, so I’ve been using these wipes on my face and neck and then a few hours later moisturizing before bed.

And yes, I do still use these with the clarins serum because the serum gives such a natural glow – and if I’m using St Tropez it gives more of darker tan.

As a side note, I finally tried the tarte brazilliance tanning lotion this month too. I love the consistency, I love that it is more moisturizing than the St Tropez. BUT, I don’t love the color as much and it does seem slightly streakier. St Tropez mousse reigns supreme for me. 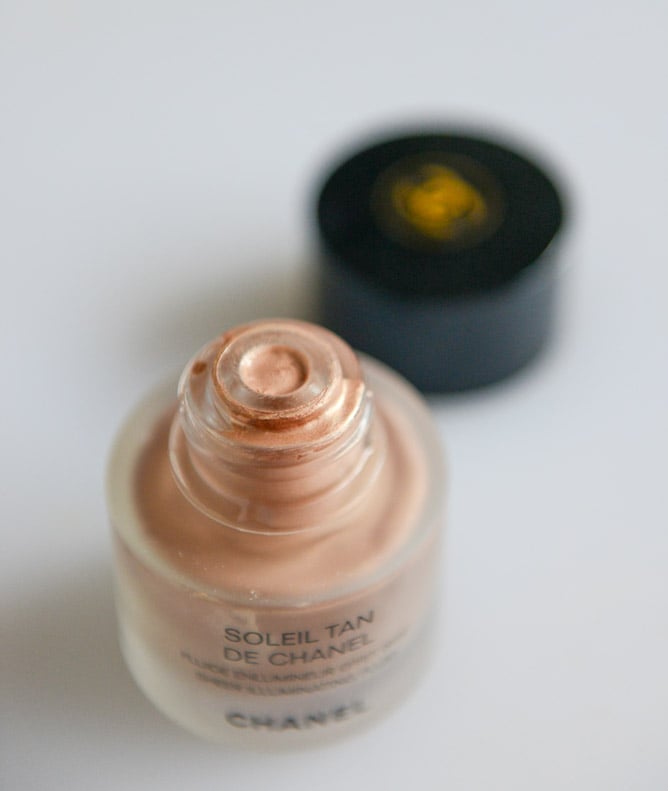 At the end of last summer I bought this chanel soleil de tan, which is a golden almost-bronzey like illuminator. I used it a handful of times but could never get the hang of it, and then come winter when I wasn’t using any self tanner, it looked ridiculous on my pasty skin. But I yanked it out last month and have been using it every time I wear makeup. I’ve done a few things – mixed a few drops with my tarte tinted moisturizer (it does not make your face sparkly whatsoever), mixed a few drops with the bare minerals bare skin foundation or dabbed it on my cheekbones and random places on my face. LOVE.

I have a hard time finding cream highlighters that I like, and while the benefit high beam has been my favorite for months, it’s super light – almost white-ish pink – and just looks super metallic and doesn’t blend as well when I’m using self tanner. So this… is now perfect. Can’t even express my adoration. This is something new I bought this month – I happened to be walking by the MAC counter and spotted this new blush from the kelly osbourne collection in cheeky bugger. It has been the ONLY blush I’ve worn all month! Which is a biddie, considering I’ve been so excited to bust out one of the tarte blushes I love in summer – tipsy. This is just such a pretty color. It’s not even that special but it just makes me look glowy or something. I dunno.

I also grabbed the kelly osbourne version of candy yum-yum (you may remember me mentioning I lost mine, wah) and am freaking. It’s only slightly different from candy yum-yum but I may like it more? Since it’s summer I’ve barely been wearing anything on my eyes. I’ve switched between MAC rubenesque paint pot (this color might have been one of the first paint pots I ever tried ages ago with bare study… total throwback), urban decay sin, occasionally putting sin OVER rubenesque, and the urban decay naked basics palette for a more matte look. I really haven’t been wearing any eyeliner, just loads of mascara. I’ve been so boring.

Sidebar: rubenesque is a love/hate shade for me because it doesn’t jive with my winter skin. But in summer it’s one that I diiiiie over. Two staples on my lips this month: maybelline shocking coral and MAC creme cup. Nothing new but shades I just lovelovelove so much. Other than these, the only thing that has really been on my lips is the hourglass fortune gloss that is stashed in my purse. Every summer I go a little nutty over beach waves spray since my hair has a natural wave. I’ve talked about the fekkai summer waves spray on my blog for years, but when I went to get some at ulta earlier this month, it was nowhere to be found. I did find this alterna summer ocean waves spray and love it MORE. It smells better, it holds the wave better and GAH. It’s just the icing on the cake of summer hair. Okay okay, so back when I purchased the bronze goddess whipped body cream from estee lauder, I had no idea that it had this cult following and that people went crazy over it. Everyone kept telling me to buy the perfume before it sold out, so I managed to find it at my dinky Macy’s and obviously it’s just as good as the cream. Nothing has ever smelled so much like summer to me! It’s nuts.

I almost consider this a body spray because it doesn’t seem to last super long, but if it’s layered over the whipped cream, it will last all day. It’s amazing what I will pay for scents that take me back to my childhood. Finally these oldies but goodies have been my go-to nail colors this month because OMGSUMMER. They just scream summer to me, especially when together. I love them so much. China glaze flip flop fantasy and essie bikini so teeny. Not limited edition either! Faves. 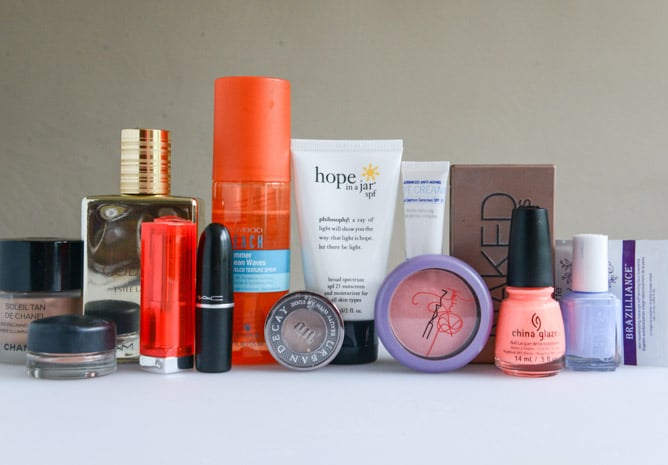 That is allllll. I’m in major summer mode and not wearing makeup most days, but when I do… this stuff is on my face. What are you loving for summer makeup? TELL ME. Be a bad example.

{as usual, none of this is sponsored and all of these products were purchased by me. i am not affiliated with any of the companies above, nor do i accept free products from them. just love to talk about what i like, makeup junkie to makeup junkie. there are a few amazon affiliate links above. thank you for being here!}