This is the best trashed up dinner ever. Except according to my husband, who refuses to eat nachos for dinner but WHO CARES.

Is it fair to call nachos with obviously fried onion rings “summery” and “light?” Because these just are. I’ve been craving some onion rings ever since I taught a burger class a few weeks ago where we made crispy onion straws for a quinoa burger topping. Ummm… so good. Needed them again.

This was also BEFORE I burned an entire pain of fries (literally pulled them out of the oven and they were black twigs) but I think these made up for those.

And these nachos are a little high maintenance but you can make a few pieces ahead of time and throw them all together. I just love fat plates of nachos that have something special on top of them – making it an over-the-top indulgence. Much better than chips covered in bagged cheese and shoved in the microwave for 30 seconds.

Still not above that though. I cheated and used a store bought rotisserie chicken in this recipe. And I’ve gotta tell you. Ever since finding out I had a bun in the oven, I’ve made sure to pick up a chicken at the store because I know that way there is always something for Eddie’s lunches and dinners. However, it’s been the one thing to turn my stomach so even to this day, my game plan is to throw the chicken in the back of the car and drive home as fast as I can while holding my breath. Then I’m like PLEASE TAKE THIS CHICKEN OUT OF SIGHT IMMEDAITELY! And beg him to rip the meat from the bones and dispose of the evidence while I drink bubbly soda. It’s worked out perfectly. And after that: comes nachos. It’s like our reward for driving with chicken and pulling chicken. As long as it isn’t dinner.

My BBQ flavor fantasy includes my favorite sauce with a mix of sweet corn, often some green onions and radishes with a bite. I always like a cheddar, but this time we went with a quick makeshift white cheddar queso and freshly grated cheese – melty in on-so different ways. 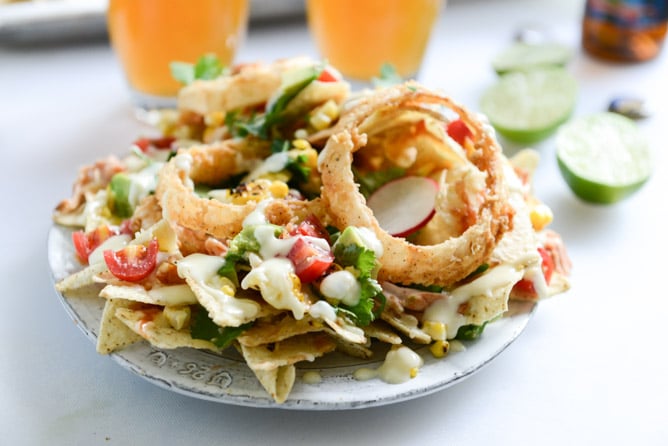 a hug of nachos.