I’m getting serious about holiday cheer. And this is the first step – a huge mug full of lovin’.

Dessert and comfort in a cup. That’s what we are doing. You know when I made the smoky bacon almond brittle and told you about the bourbon bacon cookbook I found a few months ago? Well yeah. I also found THIS!

I was like… wait a minute. Apple cider… and eggnog… two of my favorite things… kind of combined… with booze… served hot and garnished with cinnamon and apples…?

WHY DID I NOT KNOW ABOUT THIS BEFORE? So unfair.

I feel like I’ve missed out on years of hot cider nog and I want those years back. I will admit, the name “hot cider nog” sounds somewhat atrocious. Does it not? But it perfectly describes what it is so I didn’t really know what I could change it to. Also, since you can serve it warm or throw it in a gigantic punch bowl, I can’t stop thinking about those lovely moose glasses a la Clark Griswold and cousin Eddie.

Get a set of those and you’re good to go. The flavor of this is UNREAL. Sure, it’s like your traditional eggnog – but a bit sweeter with that delicious autumnal cider flavor, some extra cinnamon and deep apple vibes.

And! You can obviously leave out the bourbon if you’re so inclined… but. Perhaps, don’t? We can have the best invisible internet friend holiday party ever. 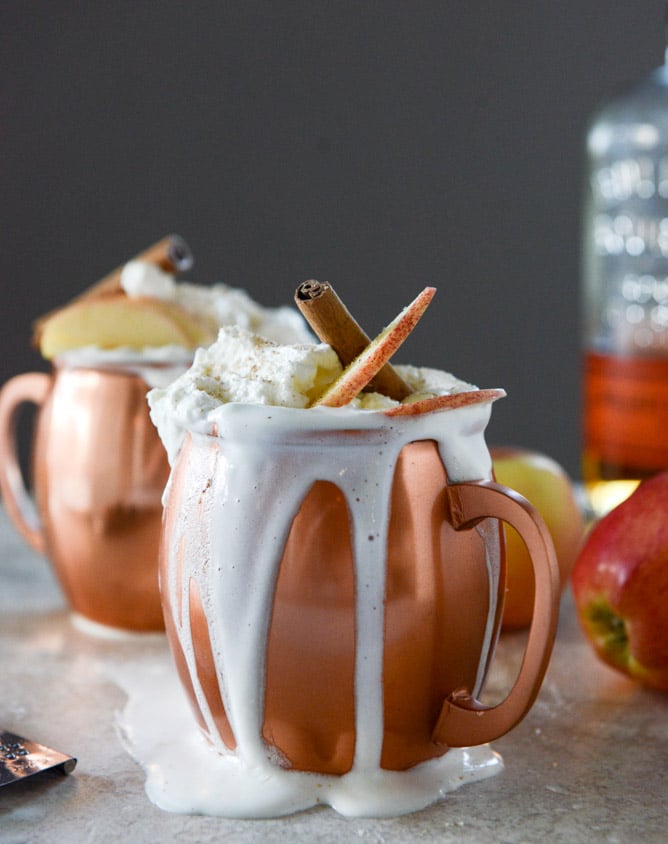 I can’t think of a better way to clink glasses with friends.