Hmmmm. I apologize for doing this to you. Because as I see this cake right now? On my screen? I want it immediately. It immediately needs to be in.my.face.

Sometimes I go on complete and utter bacon tangents in life and I’m currently in one. It feels SO good to just love food again – all food – so, so much. I think the last six recipes I’ve made contain bacon, Monday’s had bacon, today’s has bacon, next week – well, I’ll see what I can do for you vegetarians and stuff. The good news is that if you don’t like bacon, want to eat this today but are observing lent, or just can’t get bacon + dessert in your brain, then you can maybe kinda sorta leave the bacon out. I mean who doesn’t want a chocolate cake with bourbon frosting?

The bad news is that… you might take the bacon out. Last night I made bacon cheeseburger skillet pizza. The recipe would be right here. Burn it into your brain. ALL THE BACON.

I’m on a rollll. And very annoying. I’ll stop. This cake: it is pure love. The dark chocolate cake itself is to die for. Decadent but not overly sweet. Soft and fluffy and tender and moist. (No I can’t use any other word.) So seriously chocolate that you just can’t resist. While that is totally fabulous – and also totally something that can stand on it’s own – the frosting is what seals the darn deal. First, it’s CREAM CHEESE FROSTING. Ahhhhh. The most delectable of all the frostings. What I wouldn’t give to just swan dive into a bowl of that frosting and… nevermind.

The not-so-secretive secret is that it’s also whipped with bourbon and the crunchiest bacon in all the land. It’s like chocolate pound cake with bacon bourbon cheesecake icing? 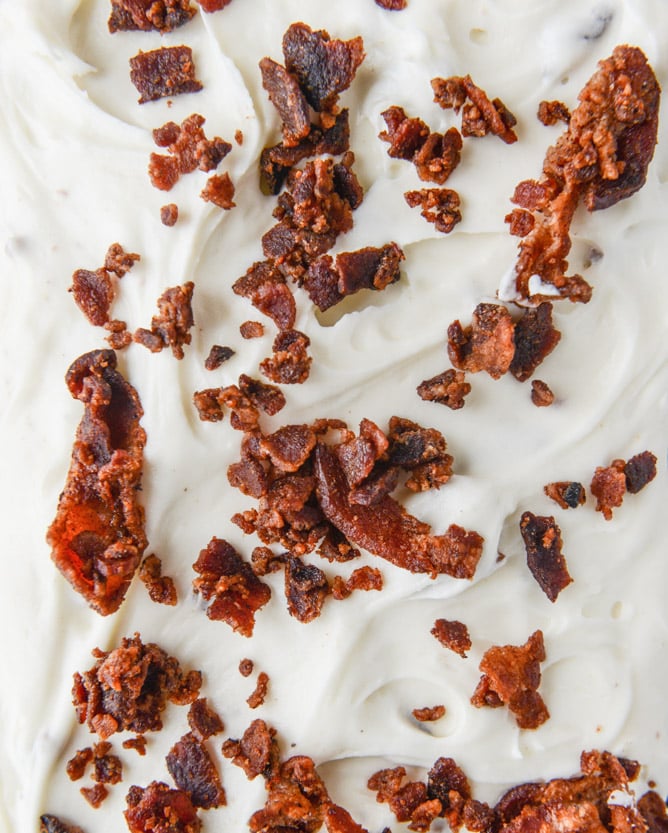 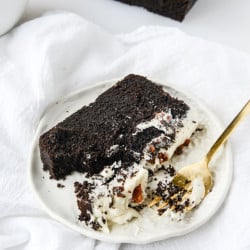