Ugh. My little love bug. GAH. If you didn’t know, I’m quite in love with this chunky little monkey of mine. He is such a joy. He is always so happy. He makes every day so much fun.

(P.S. if you’re on snapchat I post videos and pics of Max almost every day. username = howsweeteats.)

I don’t know how we got so lucky. Max is so happy. He is so wonderful and giggly and excited all the time. I don’t know why or how I lucked out. And crazily enough, I am still super calm around him. Last week he got sick for the first time (with croup) and it broke my heart. But I didn’t absolutely freak and have a panic attack like I always assumed I would. Somehow I was able to stay fairly calm (besides the one time on Friday afternoon I called my mom on the verge of tears and was like OMG GET HERE NOW THE COUGHING IS SO SCARY) and we made it through. We have lots of things to talk about!! Here are some updates.

Max has been on the move for weeks now. Probably more like a month or two. He is so freaking FAST. Sure, everyone always told me stories of how once babies starting crawling they move everywhere and are so quick, blah blah blah and just like everything else I ignored it and was like “yeah. Right. I’m sure. It’s a BABY. They aren’t fast!”

Um. No. He is fast. Like lightening fast. One minute I turn around and the next I can’t find him. How is this possible?

(It is kind of the best workout ever though.) The newest thing is that in the last two weeks he has started standing. He pulls himself up everywhere. I feel like our house is one giant disaster waiting to happen. He’s pushing up on toys (we have this sit to stand walker) and walking while he pushes them and I AM NOT READY FOR THAT!

He gets up, looks at us with the biggest smile and goes about his task. Like he KNOWS he did something cool.

Also, when he is about to do something he knows he shouldn’t (like play with the cord to my computer, try to climb up on the fireplace), he starts crawling over to it and halfway there turns around and giggles, then races to his forbidden destination.

He’s constantly babbling and talking and there have been lots of “dadadadadada’s” and some “hi!” and “bye!” but nothing seems deliberate. So I can’t say he’s said his first real word yet. I was the crazy person that was texting my friends at three months like OMG MAX IS TEETHING because he put his freaking hand in his mouth and started drooling. Note to past self: that was SO not teething for Max.

We have been pretty lucky in the teething department. He has one bottom tooth and the other is rightthere and he hasn’t been too miserable. There have been a few moments of screaming in pain (while I’ve never been able to make the exact distinction between the wet/hungry/sad cry that everyone told me I would, I definitely know the teething and “in pain” cry) but mostly just a lot of chewing on everything. He doesn’t like any of the cold frozen teething toys yet. I’m still nursing as much and as often as he wants. I love it so much. I do a lot of things that “everyone” says not to do (nurse the baby to sleep, etc) but right now, it’s working for us.

Well – it’s working for us in that we both love it and adore it. We are both so happy. It’s probably my favorite time with him. It’s most likely NOT working for us in terms of sleep, because Max has not slept through the night yet. If you are going through the same and it feels like everyone in your life has a baby that is sleeping through the night (seriously, everyone I know, friends, bloggers, family, etc), you are not alone! We party all night long. I know it could possibly be because of the whole nursing/sleep association thing but I love comforting him. I’m okay with it for right now. I found the below on kellymom one day when I was questioning myself due to advice I kept getting and read it and bawled my eyes out because it’s exactly how I feel. 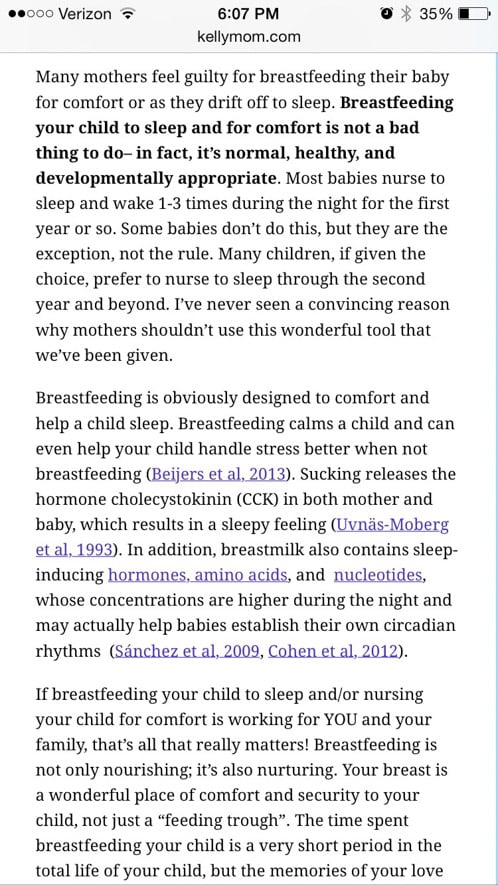 And then I read it out loud to my mom and she cried!

Ah. (Side note: I don’t even know me because this is not the kind of mom I envisioned myself to be.)

(Also, second side note: if I had to leave the house for work at a specific time every morning, I very much acknowledge that this would probably be different.)

So in this super short season of life I just want to eat him up. At least for this first year. This past week he has been waking up to eat at 230ish and then again at 6ish. He sometimes falls back asleep for a bit after that too.

Amazingly, I don’t get upset or annoyed waking up in the middle of the night. Sometimes it’s once a night, sometimes it’s three times a night (oh hi teething). I never mind at night and I actually get excited to pick him up and snuggle him. Is that insane?

I do get flipped out in the morning when I have to work and am exhausted. Ha. Or in the afternoon when I still have a good amount of work to do and am so tired. Eeeek. I savor it at night and then some days I’m quite the zombie. Real life.

And right now I’m pretty sure he is trying to drop the third nap, so naps are all over the place. So, long before I even had Max, I was interested in baby led weaning. It’s what we planned to do once Max turned six months old and it’s what we did do. (much to my mom’s and pretty much all families curiosity and fear – they are like what?! the baby doesn’t have teeth! don’t give him steamed sweet potatoes!) I wasn’t set in stone about it, but wanted to test the waters and see how it went. The first foods I gave him were banana, avocado, sweet potato and carrot. He liked them and instantly put them in his mouth, chewed and moved them around and spit most out. He played around with the foods for the first few weeks. I wasn’t too concerned because I knew that was part of it, and usually twice or three times during each meal he would swallow a few bits.

About three weeks in, I decided to try some purees in the form of applesauce and sweet potatoes.

He freaking hated it. He still hates it! I cannot even tell you what a fight it is to get him to eat any sort of puree. He clamps his mouth so tightly and turns his head and just totally hates it. He hates the spoon unless it is in his hands and he can use it. I’ve been able to trick him a few times into eating but that just feels… wrong. Right? Like so unnatural? Like force-feeding the kid purees just seems like starting off on the wrong foot. Because eating is FUN!

So! We’ve continued with the baby led weaning since it’s working for us. So far, Max has eaten almost all fruits (he really loves blueberries, bananas (except they are a bit slippery to grab) and raspberries) and tons of veggies. He likes broccoli, green beans, sweet potatoes, carrots, tomatoes, bell peppers and the like. I’ve also given him some toast and jam (he mostly sucks on it) and a few pieces of pasta.

He always takes a few bites and puts everything to his mouth, but many days he still just plays with it and learns and tosses it on the floor when he’s done. It’s really incredible to watch him learn.

We are still trying some pureed things like bites of plain yogurt and applesauce, etc once or twice a week. Sometimes he will eat a bit more than other times. He just likes to feed himself and wants the real deal. Max lights up like crazy when Eddie comes home from work. I am talking LIGHTS UP. He gets so excited every time he sees Eddie. Just these huge smiles and sometimes he even gets shy around him, like “Daddy come play with me but I’m going to hide!” His eyes never ever leave Eddie in the evenings.

Going places and doing everyday tasks is getting easier, however I am not sure when it will click that this is my real life now. I am STILL setting what are apparently unrealistic goals (daily, weekly, etc) for myself and just not getting it. I think the unpredictability is what kills me, especially as a control freak. So everyday I try to just remind myself that the day will be unpredictable and that’s just how it’s going to be. And that I’m SO lucky that it gets to be that way. I’m so grateful that it gets to be this way. I feel so freaking lucky. The other struggle I have is that… I want to be able to do it all. I mean, I don’t care if anyone ELSE thinks I am doing it all or not. But I – me – WANT to be able to do it! Like why can’t I work 70 or 80+ hours a week like I used to AND be a full time mom all the time?! I hate that doing it all is absolutely impossible, that something has to suffer, and let’s be real it’s almost always the cleanliness and cluttered house. Many times it’s dinner for me and Eddie and we scramble for something (like tonight!).

Something’s gotta give somewhere and I know that I need help on both fronts (Max + work) but I am not ready for either! I love that I’ve been able to spend every single moment with him and cherish it so much. Weirdly enough, there just isn’t much that Max doesn’t like. He has started flipping out (like just in the last few days) when I try to put a new diaper on him, like he flips his body over and crawls away and fights it. Why do guys just always want to be naked?!

He also hates having his face wiped off after meals, but he loves baths and water.

He has also totally started throwing a mini tantrum if he doesn’t get his way. And by not getting his way I mean things like having to take a nap, having to be removed from the INSIDE of the coffee table, taking the remote control off of him, not allowing him to chew on dirty shoes, etc. He gets SO mad now when we make him do/not do something and does this super low grunt and roar for about 5 seconds. Then he is on his merry way. I almost always burst out laughing which is probably terrible and something I need to stop ASAP since he is growing up and I am the adult. (how?)

It’s just wild that now he definitely knows what he wants. Okay. I know this is the longest.update.ever (don’t let me do this again!) but I think that’s everything. I’ll answer more in the comments if you have specific questions that I missed! And in case you missed it, I did do a baby favorites in July. Thank you so much for all of the Max looooove.

61 Comments on “life with max: six and seven months.”