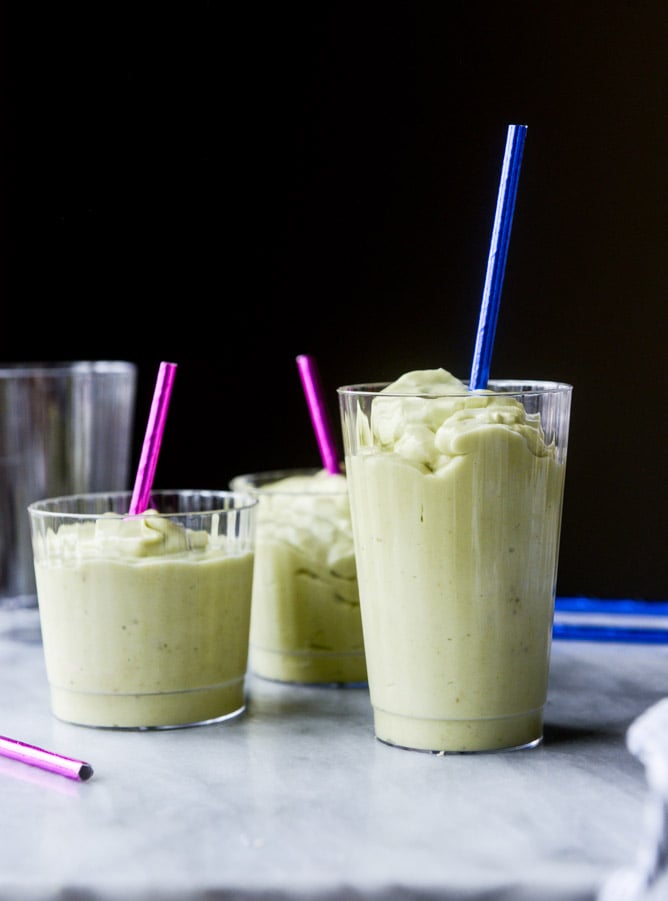 This is super delicious, I promise. Kind of like avocado chocolate pudding! But without the chocolate. Which sounds depressing, but let’s change our tune and say that it’s REFRESHING. It is!

Plus, I figured we needed something green for St. Patrick’s Day, something other than salad and something that didn’t include whiskey, potatoes or lucky charms. We can have all that for dinner. After we have this for breakfast. The first time I put avocados in smoothies was waaay back when Trader Joes carried the frozen ones years ago. Remember that? Thinking about that now, it was probably the biggest waste of money ever – because I think that there were only two full avocados in the package? And they were so tiny. I don’t think they sell them anymore, but back then (indulge me while I sound like I’m 75 years old) I had a super difficult time finding avocados off-season in my area.

And! I can usually FIND them easily now but they still cost approximately $156 an avocado. Or $2.99. Same thing. So will you please put your avocados in the blender with me?

This is why: it’s almost like ice cream. I know, I know. That’s a very bold, kind of flakey statement. It’s like saying that kale chips taste “just like potato chips!” Spoiler alert: they do not.

But it’s *like* ice cream. It’s not actually ice cream. It happens to take on this wonderful smooth and creamy texture. If you’ve ever had the old-school banana soft serve (which still frequents my food processor often) which is just, well… bananas – it is similar to that. So creamy and refreshing and delicious. I threw mine in the blender with my favorite go-to ingredients to make a milk-shake like smoothie:

and coconut milk. The light kind! I know I always ramble about how full-fat is so much more delicious, but I find that you need more liquid to blend this shake since the ingredients are rich. Light works better, and I definitely recommend the REAL stuff from the can. It’s not necessary to blend a smoothie, but it’s so good.

And for a grand finale, I like to add a drop of vanilla bean paste. I basically add vanilla to everything in my life, so it’s like that.

Shockingly, I don’t need any extra sweetener in this smoothie since I love the frozen bananas. If you want a little more sugar while still keeping it healthy, you can throw in a date or a fig or even just some honey. Yes yes.

Grab a straw and maybe a spoon and maaaaaybe some chocolate chips. ??? Can’t help it. My pot of gold at the end of the smoothie would be a Lisa Frank notebook.