Or, how much can I possibly embarrass myself. 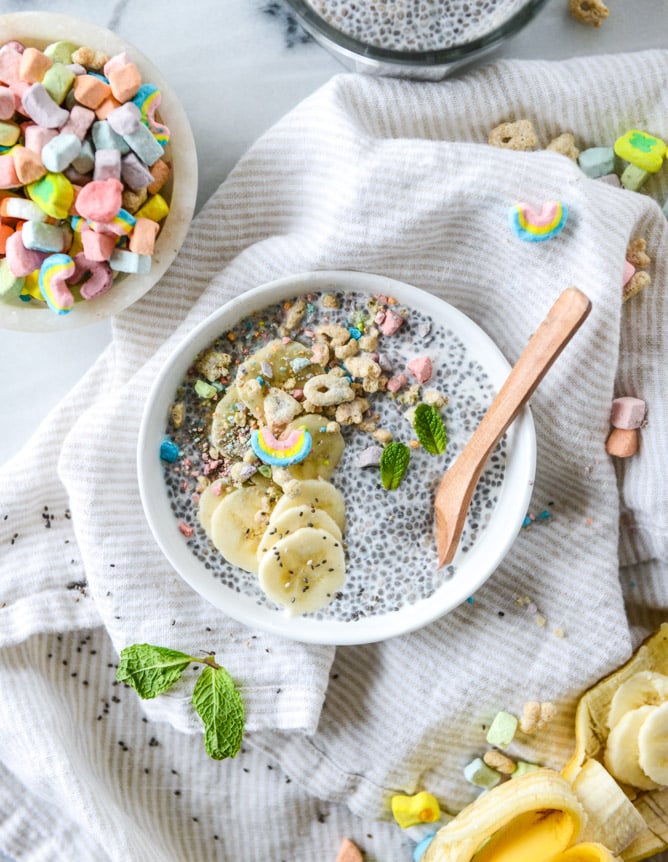 With classy breakfast with trashy cereal. Together. In one bowl! It really is magically delicious. Three lucky charms posts in three years may be a bit much. This might be it. I feel as if I’ve exhausted the lucky charms options.

First, boozy lucky charms milkshakes. How can you say no?

And then, one bowl whiskey chocolate cake with lucky charms. Never saying no, ever.

Both of them are made with booze, so I figured it was time to make something that was (more) acceptable for breakfast. It’s no secret that I’m a ridiculously huge chia pudding fan. I’ve shared a million versions (or, um, five) here on the site and have made even more in my kitchen. I love the texture, I love how satisfied I am after eating it, I love how much energy it gives me and I LOVE the variety of flavors that can turn into chia pudding. 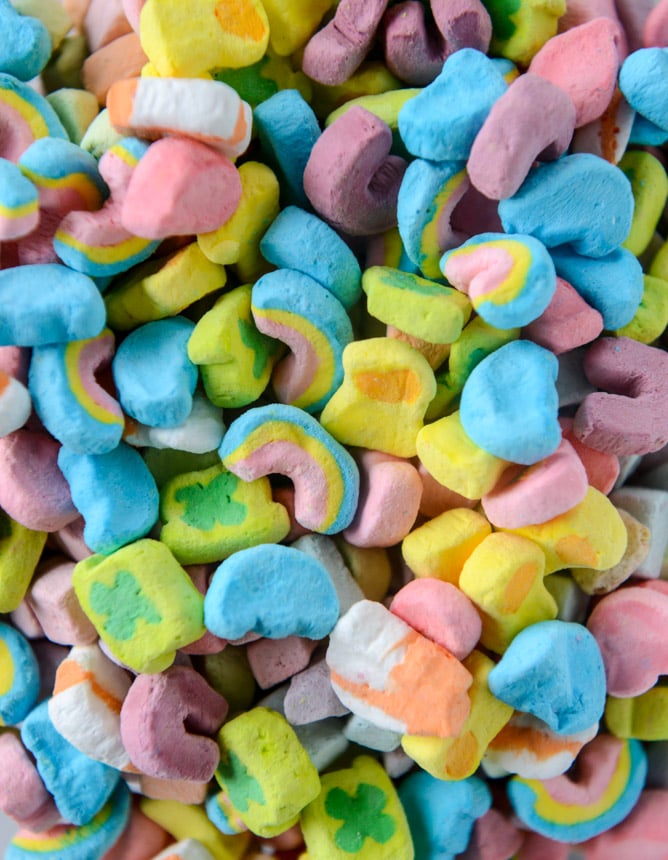 I want to frame this marshmallow picture. Maybe make it my phone background. I liked lucky charms when I was growing up but it wasn’t my all time fave (that title goes to cinnamon toast crunch) – however, the marshmallows are just adorable. So bright and artificially neon.

They’ve totally changed them though. Right? I finally bit the bullet and bought the marshmallow-only version from amazon (you guys have been telling me about this for YEARS) and those marshmallows look much more like the old school lucky charms from my tween days. They are oddly shaped, definitely don’t have rainbows and certainly aren’t anywhere near as BRIGHT. I mean, some of these new marshmallows look downright fluorescent! Mmmm. Delicious. Radioactive marshmallows. Delicious in moderation for sure. Once a year, we can do this. I’ve been fascinated with momofuku’s cereal milk for years. The true version is made with cornflakes and is super delicious. It’s just special, and that’s saying a lot considering I NEVER drank the milk out of the cereal bowl. Not then, not now, not ever.

Probably in the minority, but I just couldn’t do it.

But I CAN drink some cereal milk that’s made to just be cereal milk. I make no sense in life, I know. For all you regular cereal milk drinkers, like pick-up-the-bowl-every-morning-after-cereal and chug it down, you’ll probably love the flavor. It’s slightly sweet from the cereal steeping and has just enough flavor to enhance something that normally would call for sweetener. With my favorite coconut almond milk, it’s fantastic. I still like to add a touch of honey here, but the chia pudding only requires three “real” ingredients: cereal milk, honey and chia! Plus a little vanilla extract, if you’d like.

For those of you who are weird about texture? This could certainly be your worst nightmare. Not only do we have the bubble-like chia pudding, but we have those styrofoam-like, squeak-between-your-teeth marshmallows. Apologies! Have some cinnamon toast crunch. Now all I want to do is make one massive layered lucky charms chia parfait. Maybe sneak in some banana soft serve. Some coconut whipped cream. Some sprinkles! A chocolate drizzle. Some peanut butter? This will surely bring you luck.

« Previous PostHow to Make an Oatmeal Latte. {Video!}
Next Post » Currently Crushing On.