I have no idea how I am writing about my baby being 18 months old. 18 months! The crazy thing is that he turns 19 months old tomorrow, so it’s even worse. 19 freaking months!

For some weird reason I’m sort of emotional over the 18 month mark. I told Eddie tonight at dinner that I think it’s because to me, it seems like 18 months is the cut-off for when you stop saying your baby is “x amount” of months. I’m used to hearing 18 months and then it’s like you just start hearing two years old.

How is this happening.

So. Max is amazing. I want to update and write about him so much more but I struggle to find the time and make it a priority. He is the little love of my life and my best bud. He has the BEST personality. He is so sweet and such a cuddlebug.

Have I reached annoying parent status yet? Biggest struggle at the moment: this boy is an insane CLIMBER. It’s like he is a monkey and I think he’d climb up on the fridge if I let him have half a way to do so. He is a nut! The other day he pushed his little bike over to the kitchen counter, climbed up on the seat, climbed UP ON THE HANDLEBARS and stood to pull himself up to the counter. How? Why? No. Hellllp.

We’ve definitely entered the land of tantrums but I haven’t had to deal with one out of the house yet. The things that Max loses his mind over are HILARIOUS. Like if there is a truck on the floor and I moved it with my foot while he is sitting in his high chair eating lunch? Massive meltdown.

If we try to clean up ANY toys in the room while he is there, even if he is not playing with them? Meltdown.

If we try to bring him inside after playing outside, even if he’s been out for four hours and has walked his little legs off, meltdown.

I was sort of at a loss of how to discipline (if that’s even the right word at this age) him, even though I’ve read things and listened to podcasts, and blah blah blah. When he does things like continue to slam the door into the wall (oh yes, it makes a funny sound and a HUGE HOLE IN THE WALL) or throw all of his food off his high chair or throw something he shouldn’t.

Then my mom gave me an example of how she handled a situation one day and was stern but confident about it and it just clicked! No idea why it was so hard for me. I’m confident in telling him “no” now and have no idea why I needed that reassurance.

Mostly, we do the whole “let’s redirect our attention” game and try to get him into something else as opposed to continuing to tell him NONONO that he can’t do what he is currently doing – unless it is something he really should never be doing.

The best piece of advice I got with this is to not put him in situations where he can “get in trouble.” So really removing every last item from his reach that he shouldn’t have (like a bottle of nail polish he wants to carry around all day… what? or chapstick, etc) – not necessarily things that are dangerous obviously but just things he shouldn’t play with. This helped a lot. As for sleep? Ha. HA. At nearly 19 months he still has NEVER slept through the night. Never. It is what it is and luckily we are totally used to it. I’ve stopped talking about it 22 hours and day and now just talk about it 18 hours a day. Less annoying, I’m sure.

If he was cranky, crabby or tantrumy often, or seemed chronically tired and miserable, I’ve probably be much more of a stress ball over it. But he’s not and I am so lucky that he is so wonderfully pleasant 90% of the time. So magically, I let the stress go in this aspect. Magic!

Even though he does wake up during the night, his sleep time is pretty solid from 7PM to 7AM.

He is officially down to one nap and while it’s usually a longer nap, for some reason I find just ONE nap to be so difficult. I work more effectively in chunks, so having those two or three times during the day where I can squeeze in some work was really nice – and now it’s like I rush to fit everything into a time frame that might be 45 minutes or might be three hours. It totally depends. When it comes to food, he has started getting a little picky. This boy LOVES meat, like will absolutely eat anything chicken, beef, pulled pork, anything like that and also really loves fish. However, in the last two weeks, he has throw every bit of chicken off his plate and completely refused it. Eddie and I have such a hard time trying not to laugh because he is wildly dramatic about it (no idea where he gets that… ).

At his 15 month checkup, the Dr. gave such great advice that stuck with me. She said that it’s common for toddlers to have hungry days and non-hungry days and that absolutely describes Max to a T. Some days he can’t get enough food and other days he just wants to eat orange slices and bananas.

He has also seemed picky about veggies and sometimes it feels like he goes a week or two without eating one even though I put them on his plate every day. I don’t want to get in the habit of “hiding” vegetables in his food, especially because I grew up disliking them so much. So I’m trying to lead by example and just continue to give him all the healthy choices and let him choose. But the one thing I have done is chop up some spinach super finely in my food processor and add it to chicken and beef meatballs. He LOVES them.

His current favorite foods are any kind of toast, yogurt and bananas. He would probably eat three a day if we let him. He is also OBSESSED with these plum organics cereal bars which I try to use as snacks when we are out and about. However he runs around the house screaming “BARS!” all day long and sometimes I cave.

Yes, I am still nursing. Mostly just in the morning and at night. I try to distract him during the day if he tries to nurse (because if I let him, he would literally nurse every 30 minutes for a few seconds) unless it seems like he really needs the comfort. I really believe that this has helped keep tantrums at bay because he is relaxed and comforted. Also, I still absolutely love it. It’s by far been one of the best things in my life over the last 18 months. 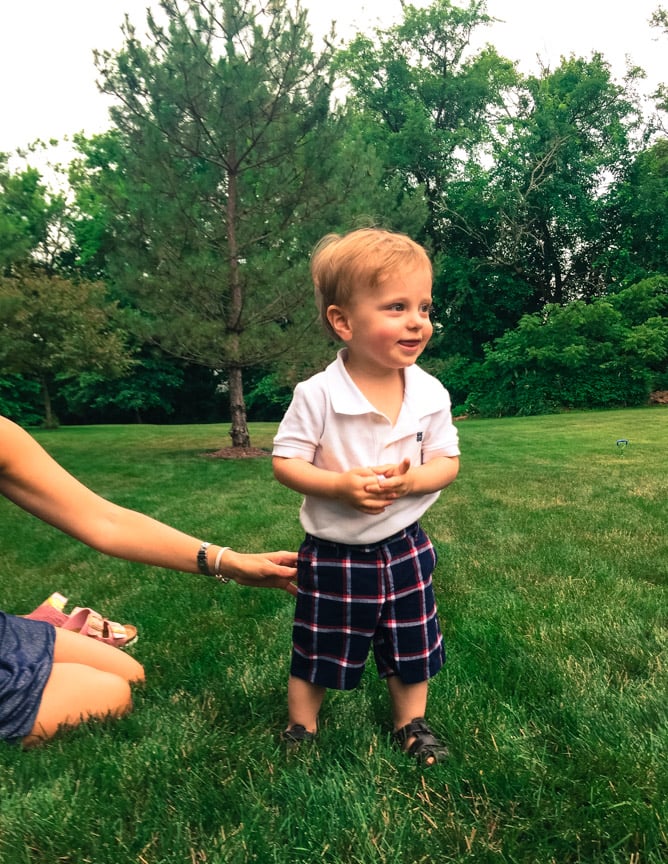 With toys, we still stick to things like blocks and cars and things to build and lots of books to read. I think we’ve done really well in not having a lot of electronic toys that “play” for him, if that makes sense. Right now, his favorite thing in the universe are CARS. And trucks. And vans. And buses which he calls “bussies.” I die.

He also loves balls and in the last two weeks started calling every ball he sees a football. He even calls round-shaped foods footballs. I have no idea where he got that.

He loves to color (with crayons indoors or chalk outdoors), play with any sort of water (even if it’s just a bucket and spoon), collect rocks and do anything outside. He LOVES to swim.

He hasn’t been into TV at all yet, but just last week we watched Cars and he loved it. He constantly talks about “queen!” (lightening mcqueen) and says cars and trucks all day long. Sometimes even all night long! He also likes to watch a few minutes of Curious George which is on PBS. He doesn’t have any interested in Daniel Tiger or Peppa Pig or any of that stuff. I still feel like the days are passing way too quickly. But at the same time, just like this time last year, I REALLY enjoy every day with him. I mean, I obviously get frustrated at times and have days where I want to bawl my eyes out (and do) and I’m 100% exhausted like all the time, but no matter what, within a few moments of having my own tantrum I remember that this is so fleeting.

He will never be this little again, this is my most precious time with him. It breaks my heart to even think about and even though I spend every waking (and, well, non waking) moment with him, I can’t get enough. God I’m such a sap. 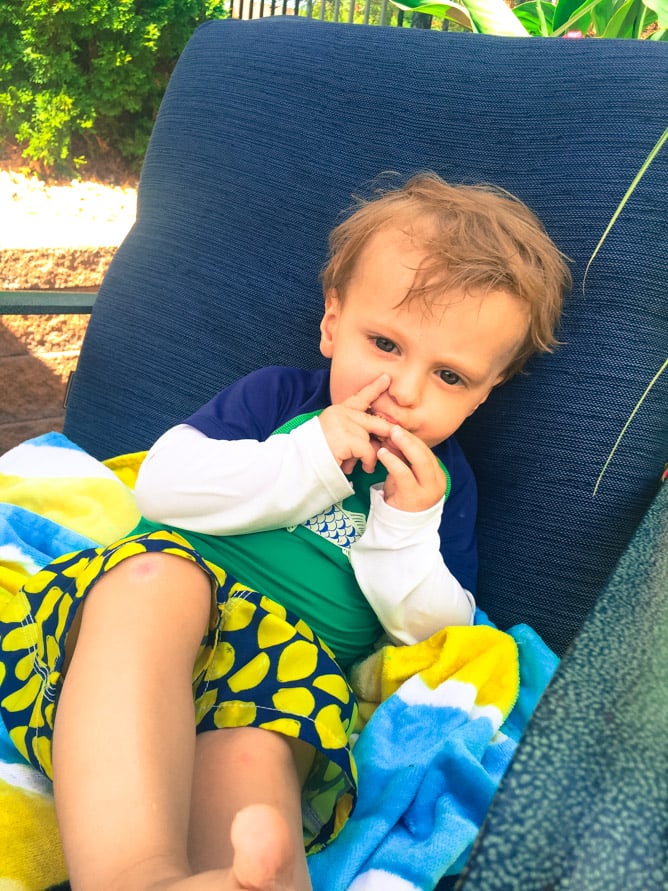 So that’s 18 months! Crazy stuff. Stay tuned for our 18 month baby favorites and thanks for loving on my little chubbabug. I just want to eat him up.