so we’re having another baby!

We’re having another baby! 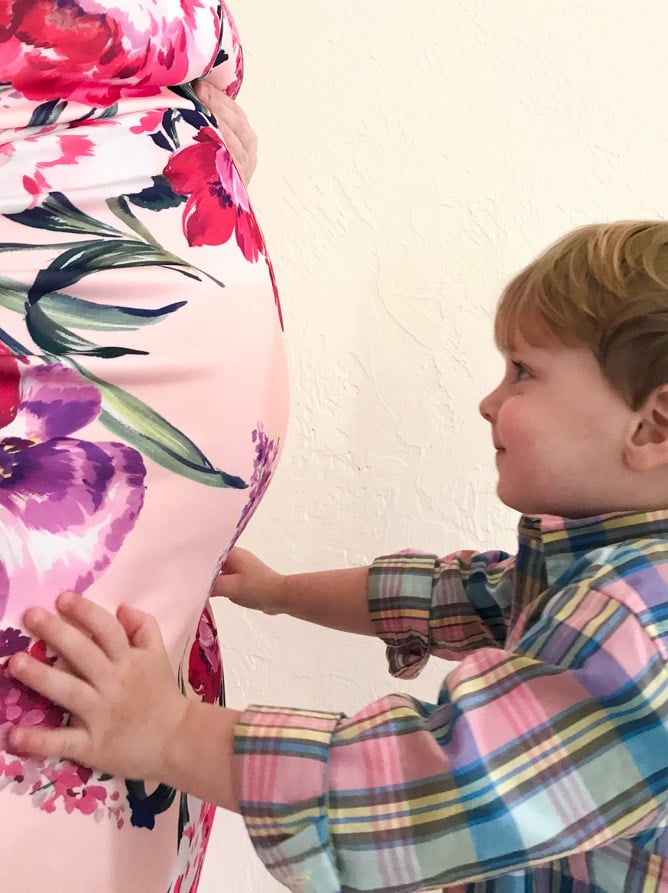 And I am oh-so glad the secret is out. Oh my gosh. First, let’s just say that it’s been the worst kept secret on the internet! Lots of people know and certainly everyone who came to my meetup last month knew (hence the lack of pictures!!), so waiting this long to tell you guys was excruciating.

I always feel out of the loop and not-so-connected when I have something that is taking up such a huge part of my life but I haven’t shared it with you guys yet.

So let’s overshare! Let the insanely rambly pregnancy updates resume. First, I’m due on Halloween, so for Max’s trick or treating sake, I’m hoping this little one stays put for an extra day or two. Heh.

This pregnancy has been wildly different from the last. I have been a lot more relaxed, for one thing. And I attribute that to four things:

And the other way it’s been different? I.have.been.so.sick. HOLY CRAP!! When I was pregnant with Max, I had a few days where I was really down and out, but that was a joke compared to the last 15 weeks. I was so nauseatingly, pukey, horrible-feeling, dead-on-my-feet every single day, ALL day, from week 5 to week 15ish. I have never felt anything like it. It has been crazy! And I love being pregnant, so feeling that way has been a bummer.

I was even taking the b6 + unisom combo that my doctor recommended for my last pregnancy and it did nothing. In my true dramatic fashion, the last four-ish months have been a blur and I have no idea how I got so much work done!

I’m obviously not sure why I’ve felt so different, but I keep wondering if it’s because I’m three years older?! Everyone around me is all “oh you’re having a girl!” but I don’t necessarily buy that. Plus, since I know you guys will ask…

WE ARE NOT FINDING OUT AGAIN! It was such an amazing experience with Max, and we (Eddie especially) really want to experience that again. 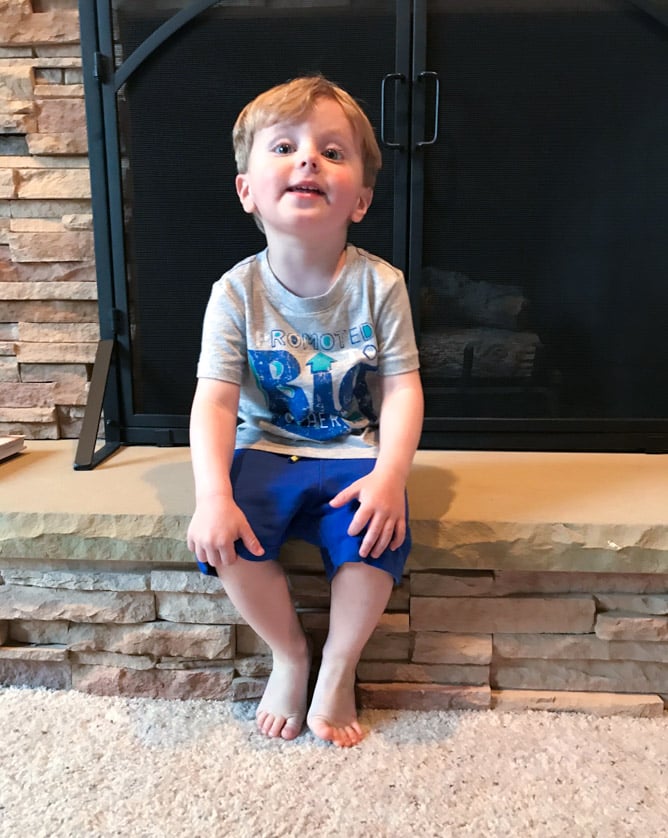 Another way that this pregnancy is different? I have zero feeling of what’s in my belly. I was so sure that Max was a boy (I had a dream when I was very newly pregnant, but didn’t know I was pregnant, that I birthed a baby boy and named him Max’s exact name) almost the entire time. This time, I am really unsure. I am sort of feeling boy, but maybe because I already have one?

Everyone always says that they know I’m hoping for a girl, but just because I’m girly doesn’t mean I only want a girl. I have two brothers, so I think that if Max has brother, it would be such an incredible experience. It’s cliché but it is so true: we are just praying for a healthy baby.

Anyhoo, now that the all-day sickness is in the past, I have been hit with a horrific sinus infection and am unable to take my usual cocktail of cold meds. I’m living on apple cider vinegar (which also DID help a bit with the nausea) and lots of sleep, humidifier-ed rooms and trying to stay away from dairy until it passes, but oomph. So how did I find out? If you’re a frequent reader to the baby page, then you know that we had been trying. I had taken so many negative tests over the last year that I was not expecting one in February to be positive, and it was! It was about three months after I stopped nursing, so even though I tried all the tricks of the trade while still breastfeeding Max, I just don’t think my body could do it for some reason.

We were leaving music class and I just couldn’t wait any longer. I was two days late but promised myself I wouldn’t test until five days… and totally caved. We stopped at the grocery store and of course, even though I am a WOMAN IN MY THIRTIES, I have to buy extra things in to cover up the pregnancy test in my cart while I walk through the rest of the store. Like what am I so afraid of? Why am I such an unassertive baby?!

The moment we got home and I took the test and saw a +, I had the same reaction as my first pregnancy. FREAK OUT! In the best way possible, obviously. But my heart was racing, I started pacing my house like a lunatic while Max just looked at me like I was crazy.

We got back in the car – Max and I ran to Target and grabbed a big brother shirt. I planned to have him in the shirt when Eddie came home, but much like the last time I found out, I forgot that Eddie had a work event that night and Max would be asleep by the time he got home. Luckily for me, Eddie ran home in the late afternoon. Unluckily for him, my aunt had dropped by to see us, and I didn’t want to spill the beans yet, so instead of having Max IN the shirt, I followed Eddie upstairs like a psycho and threw the shirt at him once we were in our room! He opened it and immediately started to bawl his eyes out because he is the sensitive one in the relationship.

HAHAHAHA. It was perfect. 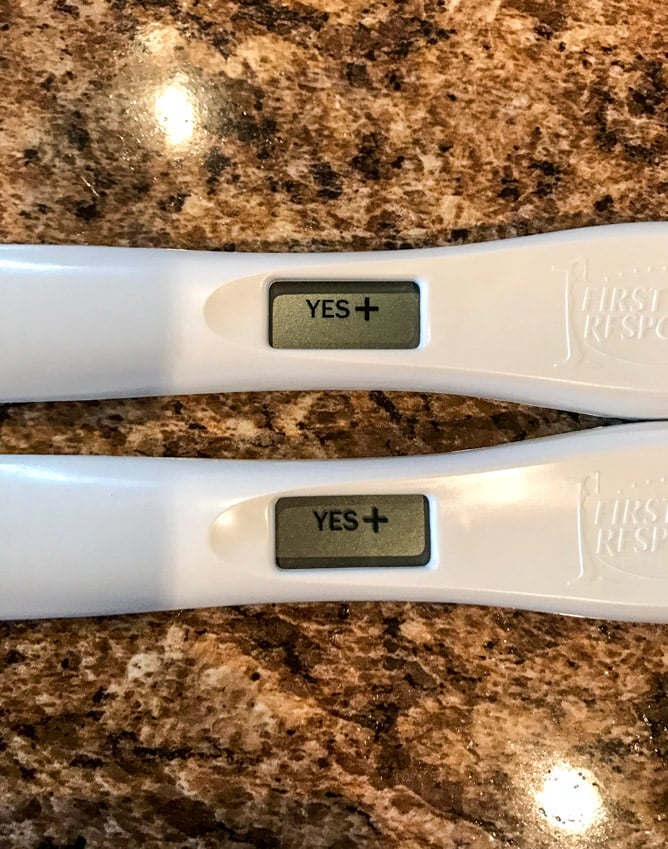 Speaking of Max, he kiiiind of gets it, but I think he also gets it confused with my SIL who is pregnant and due in July. I didn’t mention it to him much for the first few weeks because we hadn’t told our families yet and I didn’t want him accidentally mentioning it, but now he knows for sure that “there is a baby in mama’s belly.” If you ask him if it’s a boy or a girl, he ONLY says girl (but also might be confusing that with my SIL, who is having a girl!) and says he wants to name her Pink. Bahaha. No idea where that came from.

So overall, I am feeling great pregnancy-wise. For those first few months, I was petrified that I was on the verge of getting scurvy because it felt like I was surviving on saltines, the occasional pretzel and water.

Speaking of water! OMG. I know that I had a slight weird thing with water early on in my pregnancy with Max, but this was on another level. I drink water all day – in fact, it’s all I drink and really like. I don’t like soda or carbonated beverages, I don’t drink any sort of juice, the only thing I drink (asides from alcohol, ha) is kombucha. Around 5 weeks I was immedaitely turned off from water – it tasted terrible. This lasted up until around 2 weeks ago. The only water I could drink has to be freezing ICE cold and out of a straw. Normally, I prefer it at room temperate with no ice. Crazy.

And speaking of alcohol, obviously, no I haven’t been drinking all of the cocktails I’ve been sharing! I made a ton early on before our kitchen renovation, when I had multiple people here to test them out. I’ve made a few on other days when I have someone here to test them. But otherwise, I’m going to be taking an obvious hiatus from cocktail Thursday posts! I’ll be sharing regular drinks, mocktails and maybe a post on my Crumbs section instead. I haven’t had a ton of other food aversions, besides, well… everything. I haven’t wanted to eat anything because I’ve felt so awful. Things that have sounded particularly terrible are chicken, oh and sweet potatoes! Back in January when I had this 48 hour flu bug, I had been eating a bunch of sweet potatoes before and couldn’t stand the sight of them after that sickness. Since then, the aversion has just become worse.

No real cravings either, other than tons of fruit. Smoothies. Ice cold things, but not ice cream. I don’t want anything sweet, like chocolate or dessert at all. See the above where I only wanted fruit-flavored froyo with no toppings! SO weird. Um and the only real embarrassing thing I’ve been crazy? The Pittsburgh-style salads. Like grilled chicken or steak salads with tons of iceberg, piled high with cheese and French fries and covered in Italian dressing. I mean, GROSS right. May as well just order a cheeseburger. But. I only had one once… last week. Ha! I think that got me over it.

ALSO. I have to tell you about this weirdest thing. I have been wildly… irritable. SO irritable. And not with people, but with THINGS! Like, what? For the first three months, I’ve hated having my hair down and having any jewelry on. If I heard certain songs and music, I basically LOST my mind. I couldn’t stare at a screen. I couldn’t watch TV. Gilmore Girls annoyed the heck out of me. The only thing that keep me from losing my mind and puking at the same time was READING.

Guys. I freaking read 13 books in a matter of weeks. It was ALL I would do when I wasn’t working. I could watch an hour of our favorite shows or something, but couldn’t watch Sunday night TV for 2 or 3 hours. On the weekends, I would spend about 6 to 8 hours locked in our room working on my manuscript, and the rest of the time when I wasn’t playing with Max, I’d read if we weren’t out and about.

From the time Max went to sleep around 630-730, I would start reading and read well until the night. One of the early signs that I thought I *might* be pregnant was because that crazy insomnia came back that I had early on with Max. For the first few weeks, I would go to sleep and wake up at 2am and be up until 5 or 6. So some nights I would just read from 7 until 12 or 1. Some nights I read entire books in one sitting after he went to bed and while Eddie was working or sleeping. It was crazy!

Once I finished reading so much and was spending time working on the book, there were nights when I was going to bed at, um… 730. Basically with Max. Sometimes 830. Pretty sure there was a Saturday night here and there when I went to bed at 8 after working on the book from 12 to 7. I WAS REALLY A BALL OF FUN! Max had a ton of dada time on the weekends while I finished up the book.

In more pregnancy clichés, I feel like I started showing a lot earlier this time around. And right now, my bump is around the size it was when I was 20 weeks pregnant with Max. Eeep. I love it.

The kitchen remodel has been a blessing and a curse. After so much cooking and recipe development over the last few months, it was amazing to just be OUT of the kitchen and away from all that food while I felt so sick. But also, coming up with dinner was torturous because nothing sounded good. I actually am still having a tough time coming up with dinner ideas each day (of course, since the kitchen is taking weeks longer than I was told), which is frustrating. But also, okay, since I have to make dinner and feed another little mouth in this house!

Okay! Other than all that jazz… I think I’m done. 1962 words later, per usual. Glad to know we’re right on track! Thanks for reading all my wordy rambles. You guys are the best. We’re so excited!