life with emilia: five months in.

I know that I say this all the time, but HOW AM I WRITING THIS UPDATE ALREADY. Like how. How is she 5 months? Also, something else that I say often, but feel that it’s true right now: I think this is my favorite age for her. This stage, where she is such a delicious little chunk, so roly poly, so giggly and smiles at everything I say, but isn’t quite on the move yet? GAH. She is just edible. I adore her.

This babe is just the best!

A quick schedule rundown because I know you guys like those: in general, she goes to bed around 730 or 830 and is up for the day around 630 or 730 (not sleeping the whole way through though – more on that below!). She still takes three naps (sometimes even four) and her first and second are usually long ones, with the third nap being a little shorter and much closer to bedtime (like around 430 or 5PM). That’s our loose schedule, but I don’t freak if we’re off schedule slightly. I am so grateful that Max still adores her. We haven’t had any jealousy yet (but of course she isn’t at the age to steal his toys) and he constantly asks to “play” with her. Meaning, he gives us both cars, he gives her toys, he asks us to sit on the floor and play with him.

When she does tummy time, he does tummy time. When she is on a play mat, he is there with her, playing with the toys above her head. He is just so kind to her! We talk about him being kind a lot – with other kids, animals, etc – so I don’t know if it’s that. But he is just so sweet.

Last week, Max had some sort of stomach virus (truly awful) and I went to great lengths to keep them away from each other. Max was pretty sick so he didn’t notice much, but Emilia could tell. For over three days, she just kept staring at him from across the room with this HUGE smile on her face, trying to get his attention. She missed him so much! Sleep is just… sleep. I’m just being positive about it. She has not gone back to the 8 to 10 hours that she did before she was four months old. I hate to say it, but I’ve even let her cry it out a little bit. Some of it has been unintentional (like I’ve been in the middle of something with Max that I can’t leave at that very second, so she cries for a bit) and a few times it’s been semi-intentional to see if it helps. It’s like the gentle cry method, where you go in after 3 minutes, 4 minutes, etc.

The good news is that she goes down like a champ. She doesn’t want rocked. She just wants to be placed in her crib, left alone. It’s absolutely crazy to me and completely different from Max. And she falls right asleep on her own! Occasionally she will lose the pacifier and I’ll go back and put it in, but not even every time. She falls asleep easily and that is great.

The (kind of but barely) bad news is that she still wakes up at night… a lot. Sometimes it’s every two hours. Sometimes it’s after four, then every two after that. She isn’t going much longer than five or six hours for a stretch, but you know what? That is still FOUR hours longer than Max ever went! For some reason I am SO much more tired this time around, but I’m also so obsessed with her that I want to hold her at night when she wakes up! Because time is just flying. My struggle at night has been to feed or not to feed. I can tell the difference – when she is really hungry and when she just wakes up because she is still struggling to soothe herself. And those times when she wakes up and isn’t necessarily hungry, I am SO TEMPTED to just nurse her because it means we can both go back to sleep in a few minutes. When I don’t nurse her, it takes a bit more time to settle her.

I’m trying to not be in the habit of feeding her all night long (obviously) like Max did, so that’s only the part that is rough right now. We haven’t started food yet. My doctor said we could start cereal at four months if we wanted. I waited until six months with Max and did baby led weaning. I’m waiting until a little closer to six with her, but she is SO interested in food that I may give her some purees this month!

Her personality is my most favorite thing. I like to think that she is already a crazy person (scorpio!) like I am, since our birthdays are only three days apart. I mean, I’m (half) joking. This girl never has a small smile. She has a huge, open mouthed smile when she is happy – all the time. And when she is not happy, she flips out. She is so intense in her emotions already that I love it, haha. Is that crazy?

Also, I swear she is trying to talk already. She chats and talks and screeches so loudly the entire day. Max did that too, of course, but it seems like she is doing it SO much more than he is. Maybe because she hears us talking all day long. We absolutely love it and she pretty much “talks” to us all day. It’s the cutest thing. 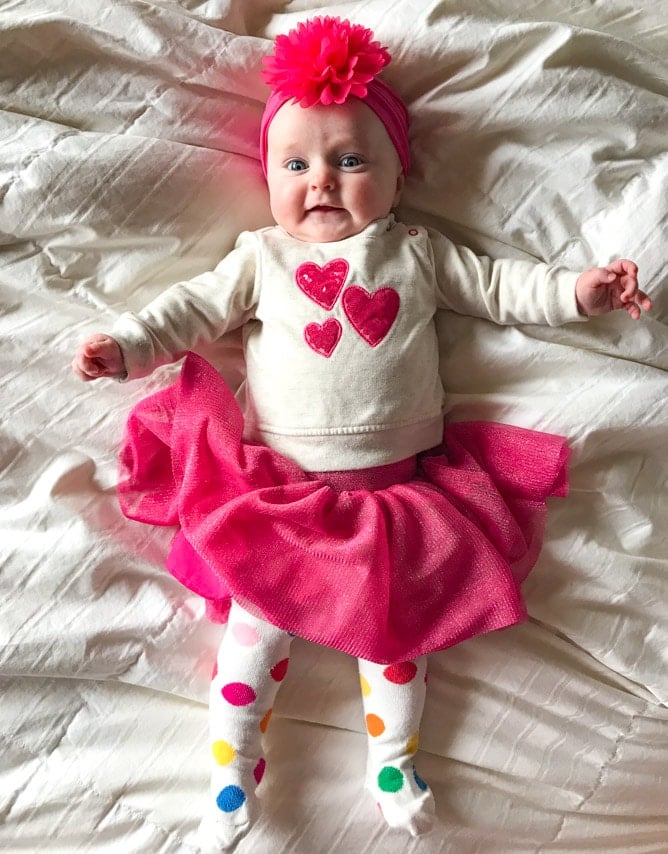 While having two kids right now is hard, I am used to it and love it so much. Everything takes a million times longer to do, but I love how FULL life seems and how loud it already is and how crazy it can be. When I have a moment of melting down (often!), I just remember that it’s not going to be like this forever. It’s not even going to be like this for a few years. Max will be in school soon and he won’t be around us all day long (I can’t even talk/think about it!) and the new normal is constantly changing. I want to be immersed in this all, the good and the bad, and feel alllll the things.

I know that sounds crazy, but it’s this weird part of like that I never knew I wanted so badly or would love! She looks like SO many different people at this age. On the regular, she looks like Eddie’s dad. Like straight up identical and it is so cute. As a baby, she really looks like my mom and my grandma. She even sometimes looks like my mom’s cousin! It’s crazy. And when her and Max are right next to each other, their faces are just identical.

I love everything about her. Her little legs and chins and the fact that she barely has any hair (omg that bald head is just too cute) and how she grabs her pacifier out of her mouth to play with it but is then pissed that it’s not in her mouth. She kills me and I adore her.

I just feel so lucky that I could cry constantly. Like why do I get to be this lucky? WHY HAS BEING A MOM MADE ME SO EMOTIONAL!? OMG. It’s the best thing in life for me and helps keep me grounded. If I’m having a stressful day, sitting down and holding my kids changes everything. Thank you so much for listening to my rambles about this little chunk of love. xo

17 Comments on “life with emilia: five months in.”