The one thing that must happen at your house this weekend: lobster guacamole. I’ve made a lot of trashed up guacamole in my day, but never have I ever made LOBSTER GUACAMOLE.

Ooooh my gosh. We’re doing this. And it’s unreal. Unless it comes to guac. This is definitely a high-maintenance guac recipe (probably both more and less than this bacon goat cheese pineapple guac) but it’s one that is really worth it. And it’s something that works best when served as the main appetizer, whether it’s for yourself or for a party.

Or I mean, it could also be your dinner. I have noooo idea what it would be like to eat guac for dinner. But just look at this bowl!

Does anything make you happier? A large bowl of mashed avocado is everything to me. This was actually inspired by some crab guacamole that I had a few weeks ago. It was more like a ceviche-topped guacamole and while I do like lump crab, I figured that it would be ten million times more delicious with lobster. You know why? Because it’s just so buttery.

Here’s the thing though. I wouldn’t stir the lobster into the actual guac. I mean, you can do that by accident with a chip while dipping. But don’t stir it all together to serve. Make a delicious guac and pile it high with the lobster and maybe a full lobster tail because it’s just so pretty. Lots of jalapeño pepper too! Maybe some chopped cherry tomatoes.

And a huuuuge margarita on a side. 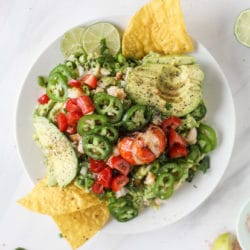 This is the plate of dreams.