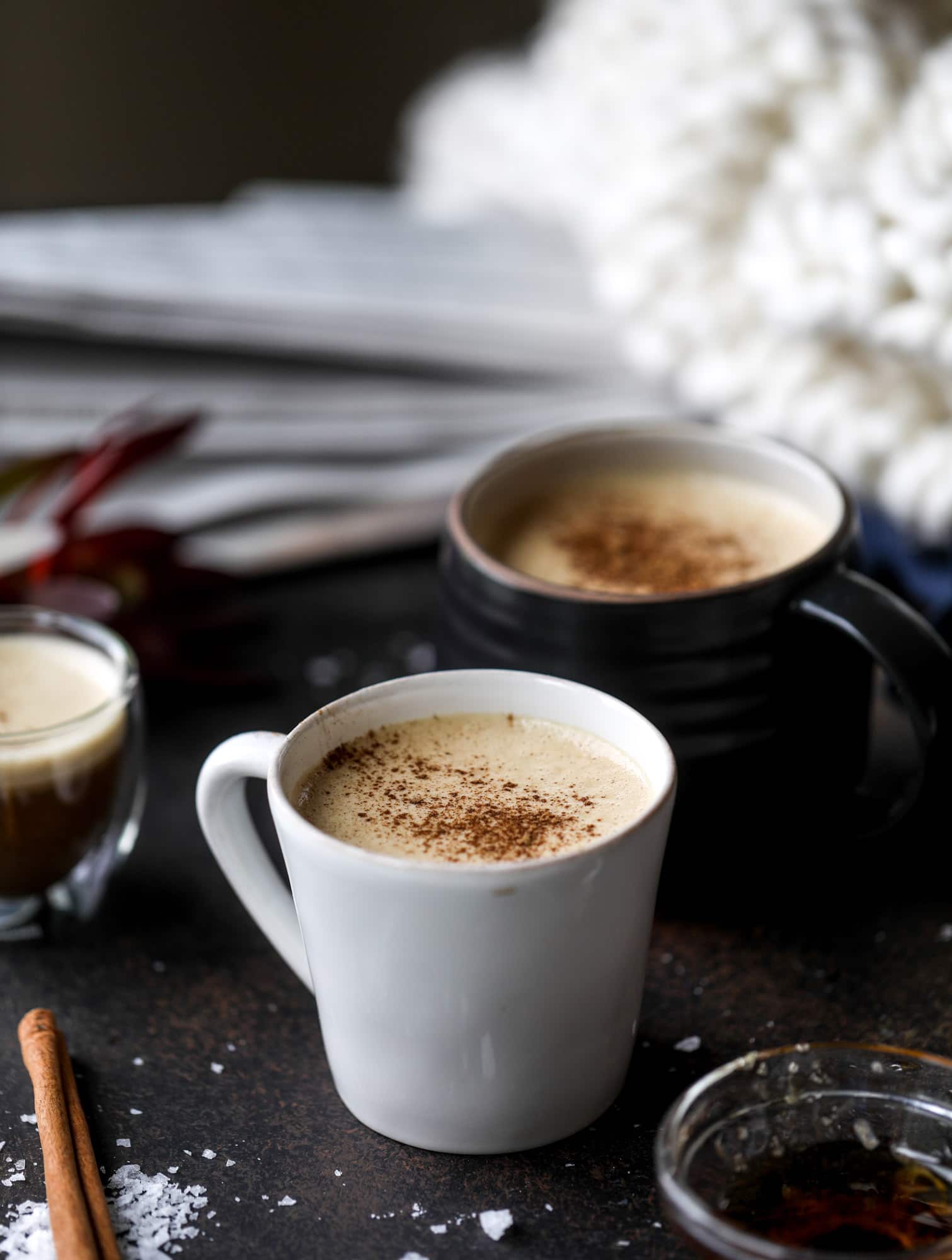 And while I will ALWAYS forever be an iced coffee person, I do make an exception for my favorite power coffee! Remember last winter when I made the coconut chai power coffee? I looooove that stuff.

Even if I keep typing “powder” every time I type “power.” A slip of the finger would not be good for power coffee.

Maple and I are turning a corner. I mean, it started last year. But I’ve never been into maple anything – I barely even liked syrup on pancakes as kid.

Let’s be real though: this was probably born my from crazy obsession with that salted cream cold brew at Starbucks this summer. That stuff is addictive. I add collagen too. I use this one. It’s basically just a part of my routine. It dissolves completely in hot liquid. Can’t even tell it is there.

Ever since I started putting collagen in my coffee a few years ago, I almost can’t go without it. Well, yes I can, but I prefer not to. Making the power coffee or adding the collagen gives it more lasting power for me. It doesn’t ever make me feel jittery and I rarely feel any sort of crash. I’m also only drinking one cup even though I want to have 64 cups. Every dang day.

I’ve only been drinking one cup of coffee since before I got pregnant with Max. Back when I was working on Seriously Delish I had a few days where I would drink like four or five cups, with a few of them happening at 5PM and nothing makes me feel as awful as that. Still remember the jitters and headache and crash! SO! I did something a little different here from my normal power coffee. Instead of coconut oil, I used coconut butter.

Coconut butter is pure heaven to me. I want to eat it straight out of the jar, always. Coconut butter is the meat of the coconut that has been whipped into a butter. I’ve been nuts over coconut for as long as I could remember – I think I used to get excited over coconut shampoo at the age of, like, seven.

Needless to say, I should buy stock in coconut butter. That is how much I live for it. It is SO good in the coffee. Of course, you have to blend it. But the coconut butter makes it super creamy. I added a touch of coconut milk here again, but you probably don’t even have to. It’s as close to a latte as I’ve got here at home without it being an actual latte, and with it having some of the ingredients I really like incorporated.

Between the maple, coconut butter and salt, I’m desperately trying not to revisit the multiple-cups-a-day habit. Yield: 1
Total Time: 10 mins
Salted Maple Power Coffee is the best boost of caffeine. The addition of coconut butter makes it super creamy and the collagen gives it a bit of protein!
Print Recipe Pin Recipe
4.84 from 12 votes
Leave a Review »