Ahhh! Today I’m finally sharing all the details of baby #3 with you!

In true third child fashion, I’m almost halfway there and have documented nothing! No bump photos. No long winded blog posts! I guess it’s a cliche for a reason, right?

So if you missed it, on Christmas I shared that we are expecting our third babe in June this year. We are so excited and thrilled and feel so lucky. 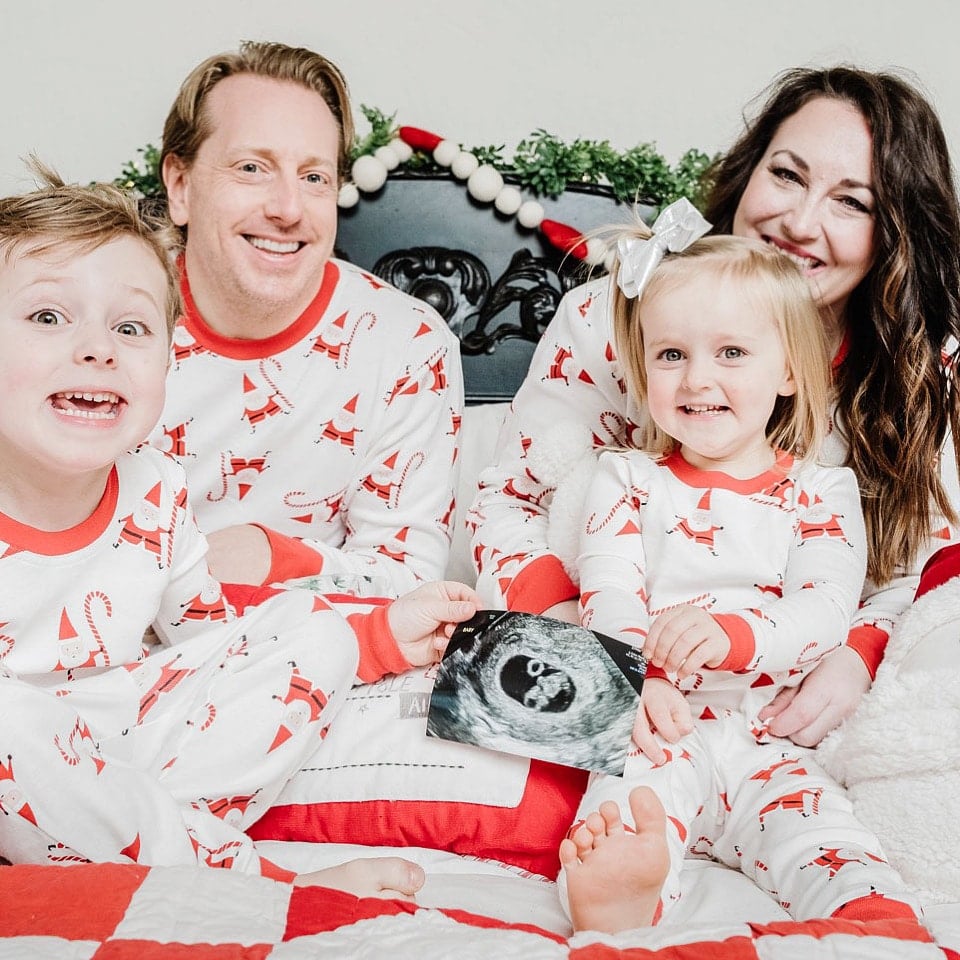 I’ve always shared insanely wordy recaps of my other pregnancies, so of course, this is no different!

How I found out was kind of crazy. I mean, okay, not crazy, but fairly unexpected.

We had been trying for quite a while (I’ve mentioned this on IG, but not really on the blog!) – about 18 months. We took a few breaks because I didn’t want to be due when my brother got married in June 2020 (which ended up getting pushed to this June) and I couldn’t really be due when my book came out in April of this year.

We really wanted a third, but are both also in love with our little family. If it didn’t happen, I felt that there was a reason and that we were meant to be a family of four. Meaning, we didn’t plan on taking any fertility measures for #3.

The month I ended up getting pregnant, I had decided in my head that we were probably done. It wasn’t going to happen and with our ages and things coming up this year, it just wasn’t in cards. Buuuut…. I was wrong.

The timing wasn’t exact. I didn’t think I could be pregnant the month I found out. On a Sunday, for the first time since early winter 2020, I asked my mom to go with me to HomeGoods to grab some stuff I need for a photoshoot. We haven’t shopped anywhere this year and she jumped at the chance. We went as soon as they opened. While I was driving home, I started to feel insanely sick. Like nauseous and dizzy. I didn’t say anything to my mom because she was trapped in a car with me, and I started panicking that I somehow got Covid and was going to get her sick. I said nothing, just, you know, instead had an absolute mental meltdown until I dropped her off. I’m sure you can imagine how fun it is to live with me!

I came home and felt so sick the entire day. I stayed on the couch most of the day and Eddie was like WTF… it was very unlike me. I just felt so… OFF. At some point I thought… could I be pregnant? I didn’t want to even mention it to him and it was a day or two too early to test. I SWORE to myself that I wouldn’t not test early at all this time. I didn’t want to get my hopes up!

Went to bed, woke up… was okay. Still didn’t feel great. Started cooking and getting ready to photograph some things for the blog. I opened up jar of hoisin sauce and the smell alone almost made me pass out. Nothing like that had ever happened before. It made me want to throw up.

I instantly ran upstairs, took a test (this is at, like, 10AM) and it quickly read positive. WHAT!

I was shocked. It was still early. I felt so nauseated. I called Eddie (which I NEVER do – we always text) and just screamed “I’m pregnant!” 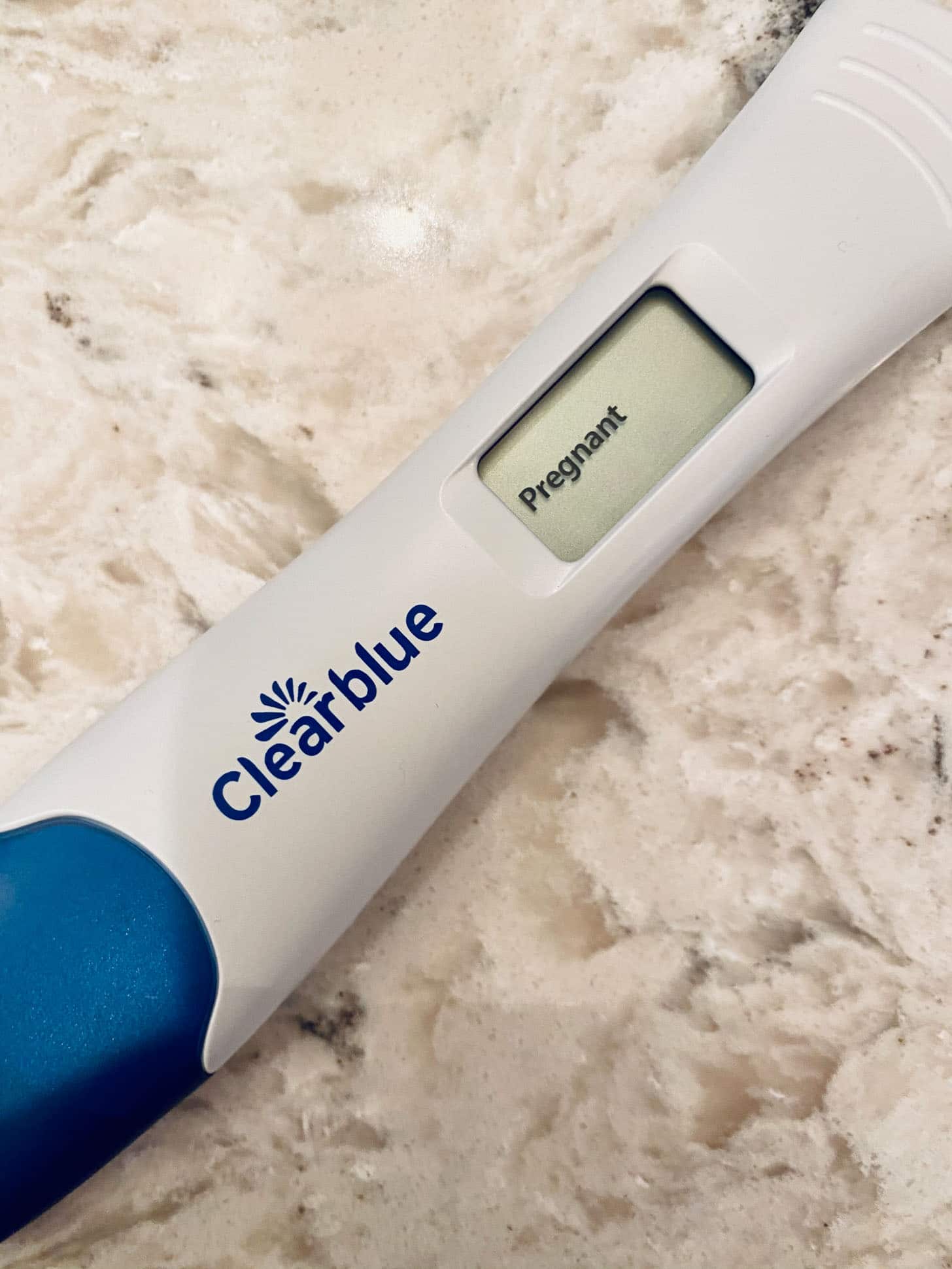 Ha. So that is how I found out.

The nausea only increased and it was crazy. I don’t know if it’s because I’m older or this is my third child, or a combo of a bunch of things, but it was baaaad. It was like every single day I was shocked at how awful I felt. Of course, at the same time I was still ELATED. I don’t know if staying at home made the sickness worse – like I didn’t have much to distract me? Of course I was busy with the kids, but it wasn’t like we were leaving the house and going places to take my mind off things. You know?

However, I was still pretty relaxed. I’ve had a lot of anxiety throughout the pandemic and felt like I was just going to relax and chill out for the first time while pregnant. We even considered telling our parents and family right away because it’s the third and I felt so sick, even though in the past we have always waited until 10 to 12 weeks.

That lasted about a week until someone really close to me (who was due two weeks before me) miscarried. That was devastating. I decided that I didn’t want to say anything until much later.

Keeping it a secret wasn’t too hard – we barely have seen anyone throughout quarantine! We were still seeing our parents and siblings a bit when safe (this was before holiday surges). We had Halloween outside and Emilia’s birthday outside, both of which I thought I may give in and say something because I could barely move, haha. It was crazy. For about 14 straight weeks, I could barely eat a meal twice. Any and everything made me sick and the thought of eating something that I had eaten before just made my stomach turn. It was wild!

We didn’t even tell the kids until I was 12 weeks – on Max’s birthday! He loves to talk and after his teacher told me that he “prayed for my arm hurting after my flu shot” for three days (omg I love this kid), I figured he would be a chatterbox! It was hard to not tell Max, because he is obviously really aware of what is going on. He looked at me a week before his birthday and said “are you still going to be sick on my birthday?” and I just felt so terrible. Broke my heart! 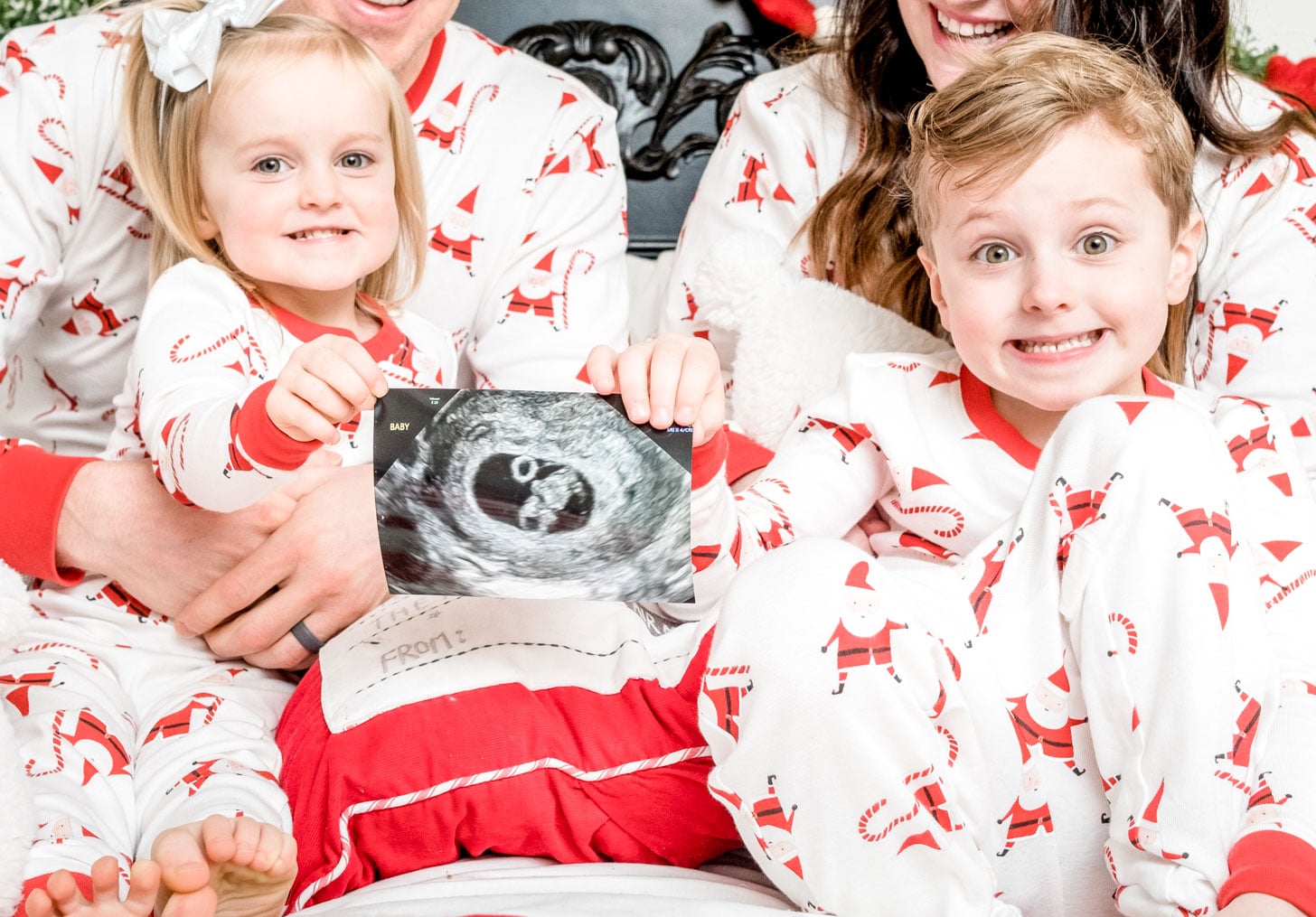 The nausea and all-day sickness is a funny thing. It literally disappeared one day at 14 weeks. Thank goodness, because I was convinced I’d have it the whole time. I realized that day that I had been on my feet running around all day and felt okay. I told Lacy that maybe I was turning a corner! It didn’t come back and, much like childbirth, within a week or so I actually forgot how it felt.

I technically do forget in theory, but it was a hard first trimester. I was sooooo happy and thankful to be pregnant, and honestly usually LOVE being pregnant, but I looked at Eddie once or twice and was like, this is it.

Thankfully, things have greatly improved since then! The only other wacky thing that happened around new years is that I ended up with PUPPS. I don’t even know how to go into this because it’s a whole thing. PUPPS is a pregnancy specific rash. It’s kind of like hives but also feels like your skin is sort of on fire which is not pleasant. It technically doesn’t go away until the baby is born and usually appears in the third trimester. It also rules your life. Once I started googling though I found lots of women who got it in their first and second trimester.

It’s pretty awful but I’ve found ways to manage it through multiple cold showers a day, pine tar soap, some food changes and drinking a whole lot of V8. I could write multiple paragraphs on this so I’ll just leave it at that.  If you had it before, you have to let me know below!

I also have no idea what it could be! At first I was really feeling girl vibes. Maybe it was because I was so sick? However, once I got the PUPPS, I read that 75% of women who have PUPPS are pregnant with boys (or twins, which I was also convinced of at first since I was so sick, haha!). So then I was like… is this a boy?!

Either way, we will be so surprised and thrilled. I have two brothers, so I loved that. Of course, I always wanted a sister, so if it’s a girl, Emilia will have one. We can’t wait!

Also, I started to feel the baby move much earlier this time which is so exciting! I honestly feel like the baby was telling me to stop being a trainwreck, now you feel me kicking, so it’s time to fall in love with me. Ha!

Despite what sounds like constant complaining above, I am thrilled and actually enjoying this pregnancy as much as I can since it’s most likely my last. I’ve always really wanted four kids, but I can’t mentally or emotionally handle them super close together. The three year gap between Max and Emilia is PERFECT. And while we started trying a little earlier (mostly because I was worried by my age!), I truly feel like everything happens for a reason and this age gap will be just what we need – Max will be 6 and Emilia will be 3. I imagine that by the time I feel mentally ready for #4, I’m afraid I’ll be too old (and Eddie is ten years older!) so we are most likely done. It’s bittersweet!

Okay, so those are the details! If you’re used to reading my updates with Max and Emilia, you are probably used to my million word posts. If you’re not, thanks for sticking around. I’m almost halfway through this pregnancy already, and will update again soon!