You agree? Or was it just me?

My breakfasts got more exciting by the day, so I needed to share. 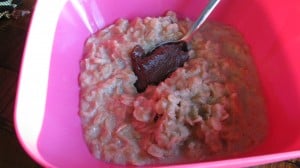 I needed more spice in my life.

So the next day, to Miss Yum Yucky’s belief, I added ice cream to my oats, a la Sarah and Holly. Yes, this is as absolutely amazing as it looks. Just imagine that ice cream melting into the warm oats. No words. I use my reason for living mini food processor to blend the oats, then add the rest of the ingredients.

I partied even harder the next morning, throwing a tablespoon of chocolate/peanut butter swirl chips into the pancakes. Drool. Recipe is same as above, with added:

And here is one of my new favorite snacks. I always rave about how wonderful and thoughtful my hubby is, right? (except for that one time he made me live here. just kidding. sorta.)

Well, Wednesday night was no different.

He texted me that ‘he’d taken care of dessert’ for the evening. We never have dessert during the week.

Well, he never has dessert. And, technically I don’t have dessert, either. I just eat a bunch of chocolate and cheesecake and leftover Halloween candy and consider it a meal. If I was to have more after my meal of Snicker’s bars and oreo crust, then I’d be having dessert.

Which is not uncommon.

I thought he would walk through the door with cheesecake from the Cheesecake Factory because that is really what my thighs need.

I was very surprised when he walked through with this. I was even more surprised when he said ‘I thought this would be a great kickoff to your birthday.’

How sweet! ‘Really? So we are going to celebrate my birthday for a few days?! What a fun birthday!’  I was very excited.

He looked confused. ‘No. Your birthday is tomorrow.’

I’m laughing at this point. ‘Ummmm…noooo. My birthday is Saturday!’

He really thought I was kidding. ‘No it isn’t! I have it on my Outlook Calendar! It’s the 5th.’

The poor guy was pretty disappointed. The best part was when I asked how he was planning to wrap my gifts, since it was 9pm. His response?

‘I was just going to hurry and wrap them. I figured they would look terrible, then I could do a guest post on your blog about how horribly I wrapped your birthday presents.’

Hahahah! We will see. If my presents look like a 3 year old wrapped them on Saturday, maybe someone will be doing a guest post.

We devoured these delights. I then proceeded to listen to a jet engine fly over my head him snore on the couch for 45 minutes before attempting to drag him to bed.

I have never woken a toddler up from a nap, but I can imagine it is similar to waking my husband up mid-sleep.

Thank goodness it wasn’t my brithday.

If you missed week 1 and week 2, you can recap to see how much the game is.

Here are the guidelines:

-You have until midnight (EST) Friday to qualify –

leave your answer in the comments section.

-The comments will not be made public until Saturday. I will get it, but it will not appear. So please do not comment 324 times like I have in situations like these. One comment per person.

-Everyone who answers correctly will be entered into a drawing for an awesome prize EVERY MONTH. This means if you participate in FOUR trivia Friday’

s in one month, you have FOUR chances to win. I sure am good at math.

-The prize will be different each time and announced on the 15th of the month. It may be small, it may be big. It may be tangible or not. It may be a lock of my hair. Who knows? Either way, it will be announced mid-month.

You have FOUR chances to win. Thank my brother for this super-fun idea.

1. What actor was originally cast as Indian Jones before being replaced by Harrison Ford?

2. Paris Hilton starred in a 2006 commercial wearing a black bikini washing a black bentley selling what item for what company that reportedly upped their google searching by 800%??

3. “In this temple – as in the hearts of the people – for whom he saved the union…”  can be found inscribed on the wall of what national monument?

Update! As of 8:25am EST the 2nd question has changed, so feel free to enter again if you answered before 8:25am EST!

Don’t miss out! You have until midnight on Saturday November 7th to enter this awesome giveaway from American Spoon!

Missed some of the recipes I made this week?

Still not getting my updates since I switched domains? Update your reader here: http://feeds.feedburner.com/howsweeteats/smSp

Are you going to Good Taste Pittsburgh on Saturday? Come visit me – I will have a booth!