Thank you all so much for your amazing responses to the first post where I really poured my heart out. It felt so good. To be honest, I am not afraid of rejection. Trust me, I expect to be rejected thousands of times. But when it is something that I really want, the fear or rejection doesn’t stop me.

Last night, I decided to shovel the driveway. This was really the first time shoveling for me, because, well . . . I lived in a house with a father and 2 brothers, and now I live in a house with a husband. Yes, I may be a brat – but that doesn’t meant it isn’t a man’s job. :)

And while living at home, it’s not like my brothers did much work either. But just knowing there were 2 boys in the house that should could do the work before me? I certainly wasn’t doing much manual labor.

However, my hubby has a looooong commute to and from work. I knew that after his long drive home and few hours in the gym, he’d feel like he had to come home and shovel, given his recent addiction.

I decided to shovel so we could spend some time together and he wouldn’t be shoveling at 11pm. It was a purely selfish decision. 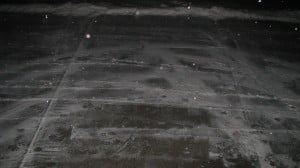 My shoveling job wasn’t pretty, and wasn’t nearly as concise as my ‘more-type-A-than-me’ husband. But it got the job done.

And this is what I was wearing. Overall, I enjoyed the shoveling experience. Our driveway is huge, and at first it was very daunting and overwhelming. I felt like I would never, ever finish. But it was peaceful being outside in the snow.

Except for the deer that I could see laying down in the woods. I was sure it was planning it’s attack.

After my thighs defrosted I was off to make dinner, which I was super excited about. I grilled some cod with old bay, and used La Tortilla Factory tortillas – they are my favorite with lots of fiber + protein. I also love the texture and the taste.

To the tacos I added: These were so delicous! They tasted so fresh and sweet. I would have preferred to use halibut, but I couldn’t find it in my neck of the woods. It was still mighty tasty.

If you haven’t began your workouts for the new year, don’t forget about the No More Resolutions workouts. Check out the guidelines for week 1, including Estela’s nutrition tips! :)

And don’t forget to become a fan on Facebook!