I think I’ve died and gone to heaven.

I made this dessert last night and it is almost gone. Literally.

It is technically a chocolate tart, but I confess that I don’t have a tart pan. I don’t really want one either.

Well, that’s not entirely true. But I’ve come to the impression that if I bring home one more kitchen accessory I may just as well file for divorce. I can only stash away so many kitchen items in my closet too. My shoes need their space.

So I made the “tart” into bars. This way, you can eat smaller bites and it’s not like you eat as much. Especially when you eat the whole pan. Because you ate it in smaller bites, it doesn’t count. You know?

I don’t know which I love more – the crust or the chocolate?

You make a chocolate ganache filling which is so delectable that you can’t stand not eating it out of the saucepan. Who cares if you burn your tongue? Then you pour it into this: And after refrigerating, you wind up with this: 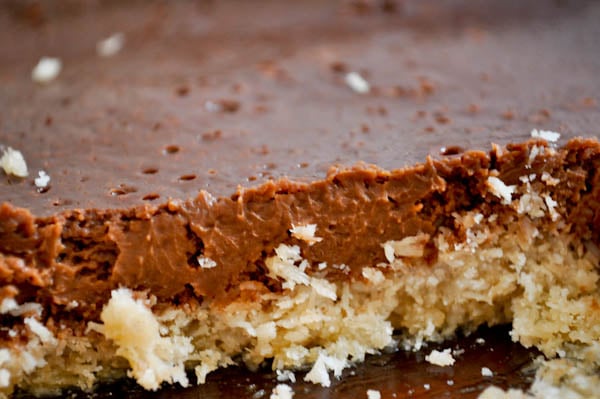 Friends, that is a raw, vegan crust.

Don’t worry, I totally de-veganized it with the milk chocolate and heavy cream. I wouldn’t want to lead you on.

I’m certainly no raw vegan chef, but this crust was fantastic! The chocolate was incredible too. So fudgey and rich.

I wouldn’t mind an entire tub bowl filled with the chocolate filling.

I would have loved making the raw vegan version with young coconut meat, but the thought of hacking those coconuts apart makes me want to stick nails in my eyes. I have no interest in that. Now if someone wants to do it for me… based on this recipe

Combine all ingredients in the bowl of an electric mixer and mix until combined. Spread coconut mixture in a tart pan or baking dish and refrigerate for 1-2 hours.

based on this recipe

Heat heavy cream and milk in a saucepan over low heat. As soon as the milk starts to simmer and bubble around the sides, remove from heat and stir in chocolate. Once smooth, stir in sugar and vanilla. Pour on top of coconut crust and refrigerate (or freeze) for 2 hours. And I need a shower.