The Tale of Never Fail Pie Crust. Part One.

Where to begin? It’s been nearly a year since I ransacked Mother Lovett’s recipes. I wish I could call it a recipe box, but her recipes are really just thrown together in a bag, completely unorganized. Much like my life.


Oh wait. Those aren’t really her recipes. Her real recipes are only stored inside her head. Which we hope and pray is in Heaven. Well, that’s great and all, but it doesn’t do me any good down here. 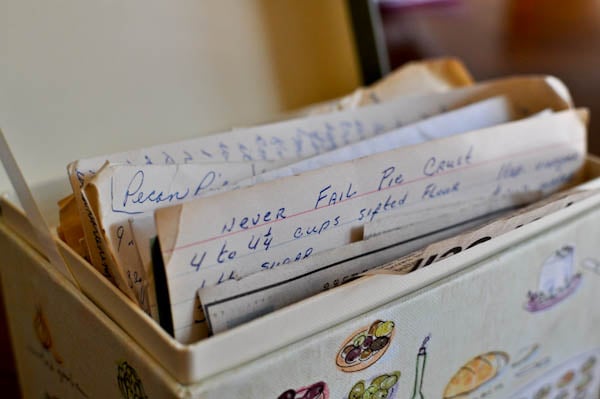 I deemed last Wednesday to be the day. The day that I would master her crust. Or at least the crust recipe that came along with her recipes.

Or just any crust. I just wanted to make a darn pie crust.


I think the reason I have not attempted said crust before is because I just don’t love pie. I enjoy pies such as coconut cream, peanut butter, chocolate silk and the like, probably because they make your teeth hurt from their divine sweetness. But an apple pie? A peach pie? A cherry pie? There is a time and a place for those pies; they must be warm and topped with 3 perfect scoops of vanilla bean ice cream that melts slowly into the apple crevices and creates a creamy deliciousness.

Come on. You know exactly what I’m talking about.


So I got to work with no specific pie in mind. I sifted my flour. Mother Lovett didn’t even use a cup measure. She used a spoon. She just added enough until it “looked right.” Not fair. Not fair at all, my friends.


Also completely unlike Mother Lovett, I used shortening. I know she is rolling over in her grave at this one. The lard gods are crying. I didn’t even know where to look for lard. And frankly, it scared me a bit to purchase lard. I’m not sure why. It’s not like you’re going to find me elbow deep in a can of lard at 3 in the morning. Chocolate yes, lard no. Don’t worry, I’ve now learned my lard lesson.

But the thing is, this recipe called for shortening. That was my first clue that it wasn’t really her recipe. But since it was in her recipes, and it was the only pie crust recipe in her recipes, I forged ahead. However, this is where I feel most at home. In my kitchen, baking and cooking, with a tiny framed picture of my stubborn Swede of a grandmother looking down upon me. I have no formal training but I adore trying new things and teaching myself.

Evidently, I also enjoy failing. It’s all part of the fun.


I was pretty sure I did everything right. I followed the instructions to a T, which is difficult for me. I rolled the dough into a ball, even thought it didn’t really look right. And I chilled it in the fridge. Then I did many productive things, like watch Dear John for the third time in two days and eat half of our pre-bought Halloween candy. It’s tough work waiting for pie crust to chill. It’s serious business.

At this time, Mother Lovett probably washed her walls, did her laundry (only on Monday), dusted the furniture (only on Thursday), and picked lint out of her neutral colored carpet that only her legally blind eye could see.


Once the dough was chilled, I brought it out and instantly lost my patience. Let’s just say there were about 60 straight minutes of this: When I got married I become a much more patient person, and that is not saying much. I had to. Mr. How Sweet is a handful himself – having two of us around just wasn’t going to fly. This pie crust tested my patience more than Mr. How Sweet does each evening when he holds the remote control.


The crust just never fit. I wanted it to be perfect and well… it wasn’t. But I smashed it in there anyway.


And then I cut the crust this way because I think I saw Ina Garten do it and I want to be her. I want to have her elegance and simplicity and class. Sadly, I think my lack of lard and the use of dirty paper scissors disqualifies me. So where does that leave me?


Here is what I got. And this is what is still sitting in my fridge. Yes, I realize it is probably no longer useable. But that’s okay. I will make another. I was too scared to bake it. And I had no plan. No fruit, no chocolate, no coconut. I was a poorly planned out pastry maker.

I do not have the pie crust gene. What does it take? I’m not really sure but I am going to implant myself with the gene and make a stinkin’ pie.


This is where you come in.

1. What kind of pie should I make? Perhaps I should have a plan first.

2. Do you have a fabulously (easy) pie crust recipe? One that never fails you?

At first, I was hellbent on perfecting this recipe for the sentimental value it held. I will still be doing that, but now… I want your recipe. The best you have. I’m going to tackle it head on!


Oh, and you want this recipe? You will have to wait for Part Two!

« Previous PostI Have a Problem.
Next Post » Mr. How Sweet: The Enabler.

130 Comments on “The Tale of Never Fail Pie Crust. Part One.”