I have so much to tell you about this breakfast that I don’t even know where to start.

How about not calling it breakfast? Because I ate it for lunch. And I also think it makes an appropriate dinner. While perusing the menu at Square Cafe this past weekend, I was incredibly drawn to the white bean hash. I couldn’t bring myself to order it; the lure of buttery, toasted ciabatta, thick, crispy bacon and melted gruyere pulled me in. So I went with the breakfast sandwich. But the hash continued to haunt me throughout my meal and even the rest of the day. I couldn’t stop talking about it.
I had to find some way to combine said menu ingredients and get this in my life as soon as possible. This was my first time using leeks! I was a leek virgin. I mean… wouldn’t you be if you had caramelized them in bacon grease? Since I never even laid eyes on the dish, all I had going for me was my superior memory – the memory that gets Mr. How Sweet in trouble approximately six times a month. I remember everything.
I knew the hash was full of leeks, pancetta and white beans. Sure sounded like a winning combination to me. But that’s all I knew. Words can’t even describe. To my cast iron skillet: marry me.

After tossing the beans into the skillet, I used a few twists and turns with a wooden spatula to mash some beans but left most of them whole. I couldn’t have asked for a better texture. And just when I thought it couldn’t get any better, I threw some buttery eggs up on top.
Creamy beans, sweet, caramelized onions, crunchy, salty bacon and perfect eggs. I only have one question for you…

Why are you still reading this? You need to get in your kitchen and make it… stat. 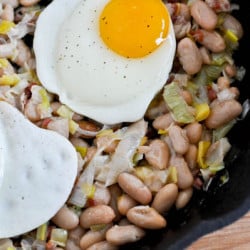 Yield: 2 to 3
Print Recipe Pin Recipe
No ratings yet
Leave a Review » I really don’t think I’ll be eating anything else for dinner this week. I’m not kidding.

« Previous PostSunday Mornings.
Next Post » Mr. How Sweet Goes To The Store… Again?!