…without me!!
I almost cried. It’s only my favorite place on Earth. And it’s 40 minutes away! But he did bring back some flowers to soften the blow. 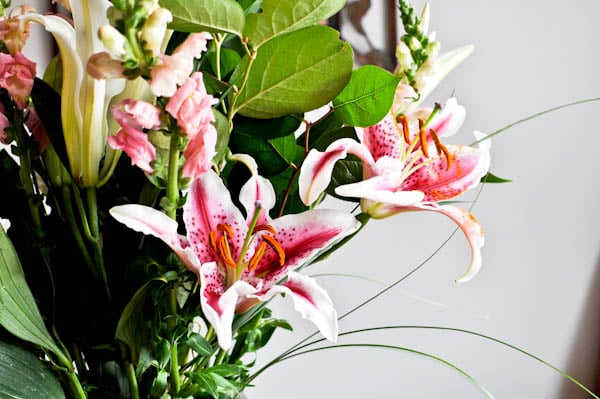 Aren’t they pretty? This marks the second time in one week he has brought me flowers. What a guy.
I had to show you what he picked up since it it quite… different from my normal TJ’s runs. Notice the distinct lack of any produce whatsoever. The 12 pounds of frozen chicken and $20 worth of beef should not come as a surprise. Nor should the diet soda, which he closet drinks while pounding chocolate chip cookies. Or the Kashi and english muffins, because he eats 2 bowls of cereal for breakfast then like… 3 english muffins with peanut butter and jelly 2 hours later.
And he ate this entire bag of beef jerky in one sitting. I think it was demolished in 60 seconds. He wants you to know that there are not 3 servings in this bag. There is one.
At least he bought me my favorite hummus. But I’m pretty sure that’s become he has started to eat hummus too. Which almost made me think that it might be time to go see Jesus. Never ever thought that would happen.
He did pick up one foodie-like item. Which apparently is going to be our dessert tonight, because word on the street is that Mr. How Sweet is cooking dinner! Stay tuned.