I clearly made two. I think this is the end of the cake batter era. Unless I come up with something even more ridiculous to create with a cake batter flavor, I’m pretty cake battered out.
Even the glaze is a cake batter glaze! These are just as simple as the regular cinnamon rolls, and perhaps simpler than the cookie dough stuffed version. I layered a good amount of cake mix on the dough along with the sugar and cinnamon mixture. It worked perfectly. They mix dissolved, leaving the rolls with the cake batter flavor. 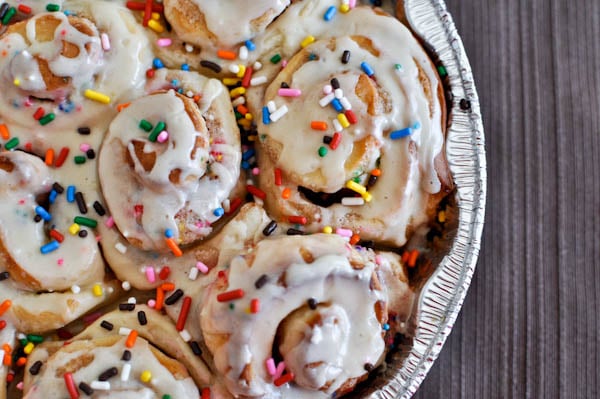 So these tasted just how they look – over the top. Of course I find them wildly fun with all of the sprinkles going on. I think it’s time to buy stock in sprinkles. And head to the dentist. rolls recipe from The Pioneer Woman (with a few additions) Just looking at these pictures again makes me want to brush my teeth.