What Mr. How Sweet Eats In A Day.

Occasionally I get the impression that you guys think I’m… exaggerating about Mr. How Sweet’s food consumption.

If I was, we’d have a lot more money and a lot more shoes in my closet. Well, okay, we wouldn’t have more money then. But shoes, yes.


Yesterday, Mr. How Sweet took pictures of his food! So this is what he ate on a weekend. It’s different than his weekdays, but do you think he is about to take a picture of his food at work?

On weekdays he usually eats breakfast at about 5:30, but weekends it is more like 8. Yesterday was 3 eggs and 2 Trader Joe’s waffles. I had some waffles too. So good.


Then an hour later, he ate a frozen Greek yogurt. This was his pre-workout snack. He went to lift weights and grunt like man for a few hours.


He had to stop at the grocery store after the gym, because we can’t let one day go by without going to the store. He got hangry and had this disgusting protein bar. I’d rather gnaw on a rotten stalk of broccoli than eat that.


He came home and prepared his first lunch. Yes… his first. 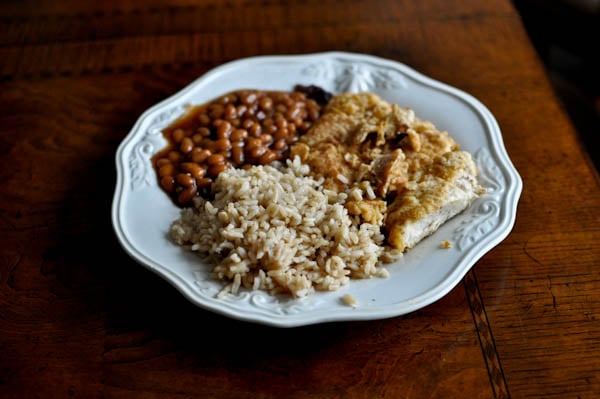 Chicken, baked beans and brown rice. Notice the beautiful, bright green veggies. Lunch of champions. Or… lunch of manly men who wear sleeveless shirts and listen to Taylor Swift on iTunes for 40 minutes.


An hour later, he was still hungry. Out comes another frozen Green yogurt.


Late afternoon, he is famished. I mean, so hungry that he just can’t see straight. I can’t expect him to sit there and suffer, he tells me. He makes a chicken sandwich with deli ham, cheese and honey mustard. He called it his take on chicken cordon bleu. He was quite impressed with himself. He made extra so he could have it for lunch today.


Then, since we didn’t get to have our usual Friday night pizza, we ordered some. (PS-> updated What We Ate!) I was going to make homemade pizza, but we were out of cheese. Quite surprising, considering we were at the grocery store 6 times since Friday – between the both of us.


So that’s that. Weekdays are fairly similar – usually he eats all of that food, plus 2 or 3 english muffins with peanut butter and jelly during the day and pretzels or pita chips after dinner. You’d think I’m feeding a family of 4.