Late last summer, I made some buffalo chicken burgers that rocked the house. They were so delicious that even I, who doesn’t need chicken to survive, loved them. And Mr. How Sweet, who absolutelynomatterwhat needs chicken to survive (fact), who calls himself a chicken connoisseur (even though he really just likes to eat it plain), who would lay in a lifeless lump on the floor and allow me to hand-feed him chicken in his last hours (notjoking), loved them too.

See, Mr. How Sweet is not a foodie. In case you haven’t noticed, I sort of am.

Sort of. That may be the understatement of the decade. But it is only 2011, so it’s a little too early to tell.

Mr. How Sweet says that I wasn’t a foodie back when we got married. But I say that indeed I was. Maybe a closeted foodie? A foodie yet to be discovered? When we got hitched, I wasn’t quite the foodie that I am today. I have matured as a foodie. Mr. How Sweet says I lied and tricked him into marrying a foodie.

I take these words with a grain of salt, considering they come from the man who became entranced in a Pajama Jeans commercial last night and said they looked “cool.”  Twice. Because that’s normal. Anyway, where was I?

It can be challenging to be a foodie not married to another foodie. It forces me outside of my comfort zone, because instead of just spicing up plain turkey burgers and fried eggs, I have to spice them up, then spice them down. Make sense?

It doesn’t to me either. But I have mastered the art of trickery when it comes to delicious food that doesn’t scare those non-foodies away. With a few simple spices that you probably have in your cupboard (and if you don’t have smoked paprika, you must go get it now – quite possibly the best spice ever) and a pound of ground chicken, I made another non-beef, non-turkey burger that we both went crazy for. But if I’m being honest, who wouldn’t go crazy for anything topped with sweet, caramelized onions and a thick, melted slab of gouda cheese?

And just so you know, Mr. How Sweet has grown as a foodie himself. Just last week I saw him layer dippy eggs in between pancakes (barf!) and add mustard to his usual ketchup-only burger (snooze!) and well… that is a huge improvement. Trust me. 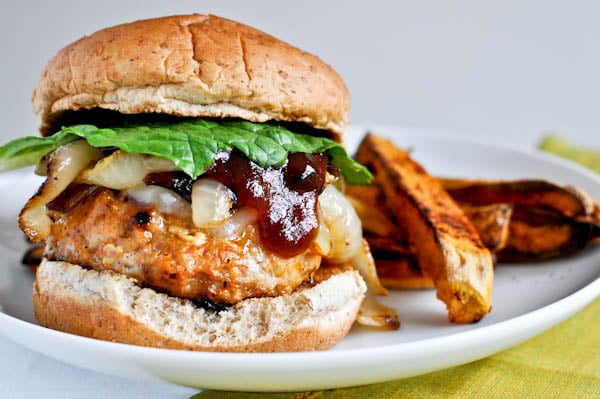 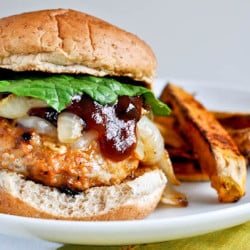 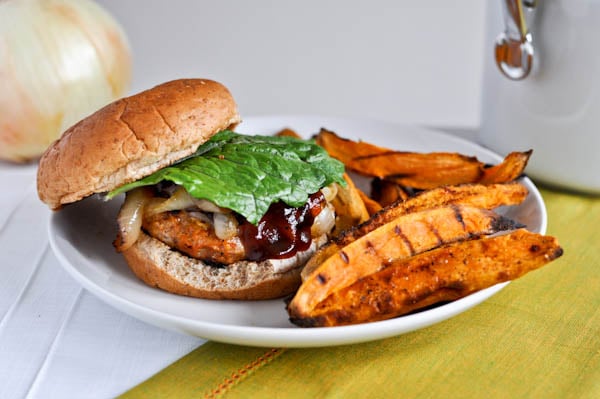 P.S -> Serve these with sweet potato fries. You won’t hate it.