They get a bad rap as pancakes’ not-quite-as-fluffy and not-quite-as-simple ugly cousin, with nooks and crannies just deep enough that the glob of butter won’t melt and a front left quarter that frequently hogs all the syrup.

I mean, really. Waffle irons are kind of a pain. As if I don’t have enough pots, pants, mixers, bowls, lids, quesadilla makers, toasters, platters and other necessary items that I use twice a year, you’re telling me that I need to find a uniquely shaped space, somewhere between my cupcake-shaped cake pan and my never used must-have All Clad asparagus pot, for a 13-pound waffle maker that I might drag out on occasion?

Yes. I am. If only to make these waffles. Go buy one. I’ll take the blame. I listen well. Just try me. You can scream and yell and holler all you want at your screen and I will just… sit here and listen.

I would’ve been positively devastated if I didn’t get that asparagus pot, by the way. Pancakes were much more accessible and commonplace when I was younger, so when it came time to register for wedding gifts, I was over the moon to spy a waffle iron and add it to the list. I once spent an entire summer burning the skin off each of my fingertips making waffle cones at Bruster’s, but it was totally worth it given the french vanilla aroma that I went to bed smelling of every night. And the banana cream pie ice cream that I used to eat by the bucketful. Back-to-school shopping was a blast that year.

Not only did I envision lots of waffle making, but I had grand plans to make waffle cones and maybe even cheese-soaked sandwiches and whatever else you could use a waffle maker for. Which is basically nothing.

Which is what I’ve used the waffle maker for. Nothing. I’ve made nothing about six times. FYI: These waffles aren’t terrible for you. It’s not like I threw together flour and sugar with reckless abandon and dumped a gallon of Haagen Dazs atop. So you can drop the raised eyebrows. Sure, there is something creamy and vanilla beany on top, buuuut who doesn’t eat ice cream on their waffles? Not me. Preheat your waffle iron and spray it with non-stick spray. (I also sprayed mine before each waffle)

In a bowl, combine flour, oats, baking powder, sugar, salt and cinnamon. Stir in eggs, milk, vanilla and butter, mixing until combined and smooth. Fold in about 1 cup of blackberries. Make waffles per your iron’s directions.

Heat the remaining berries in a saucepan over low heat and mash with a fork until saucy. Serve waffles with warm mashed berries, syrup and vanilla ice cream. 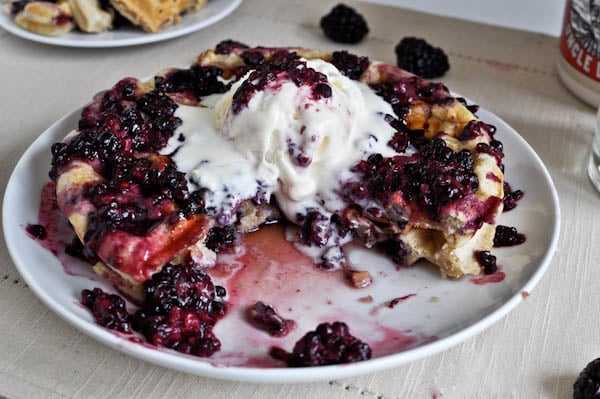 Oh yeah… the title? They totally taste like cobbler. And that’s coming from someone who shoveled in three bowls of cobbler Sunday afternoon. I can’t tell a lie.