by Jessica July 21, 2011
Have you ever bought something… say, like a package of cookies… or a pint of phish food ice cream… or a bag of peanut butter m&m’s… or a container of smashing s’mores from Trader Joe’s… and ripped into the stash before you could even unload the rest of your groceries? Like say… in the car? 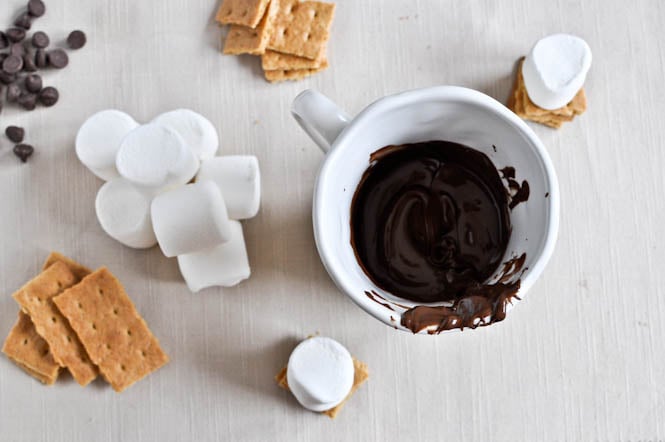 And maybe even… eaten the entire bag/pint/container… ? No?

Phew. Glad we got that out of the way and realized that we have yet another thing in common. This is the best relationship ever. Communication people. It’s all about communication. So, since I still have the entire container left *cough cough* of those Trader Joe’s smashing s’mores that I bought last weekend, I decided to recreate them in anticipation for the day when I eventually do *cough cough* run out. I like to plan ahead. Get all my ducks in a row if you know what I’m saying. And you know I love a good s’more, well… a good s’more ANYTHING. If deemed appropriate I’d gladly just shove one marshmallow (okay, maybe two), a chunk of chocolate, and a graham cracker in my mouth then breathe really heavy to make it warm and chew. Don’t be grossed out. S’mores are messy. It’s just their thing. I don’t really know why Trader Joe (he is a person right?!) calls these little s’more bites “smashing,” but I like it and I like him. And I like everything else he makes. So you should make a smashing s’more. It’s cute. It’s slightly bigger than bite-size. It’s the perfect size that looks like it will fit in your mouth but then when you actually try you make a huge arse out of yourself because you have to open your mouth as wide as possible and then try to chew and yeah… you know. But it is 100% worth it because these are awesome and even better – you can make one or seven or 39 at a time. Oh! And they are easy too. Easy peasy.

If you really want to go all out, you could make your own graham crackers like my friend Ashley once did and then make your own marshmallows too. This way you could make even tinier smashing s’mores (but um… why would you want to?) and ones more uniform in size that can actually fit in your mouth. And maybe you could have a bit more patience than me and make them prettier so they aren’t a slop pile mess. I personally think they are the perfect snack to mindlessly pop while you watch Teen Mom and that other really intellectual show that makes you use your brain. Oh and if you want to pop this in the microwave? You are smart. Do your thang. I approve. 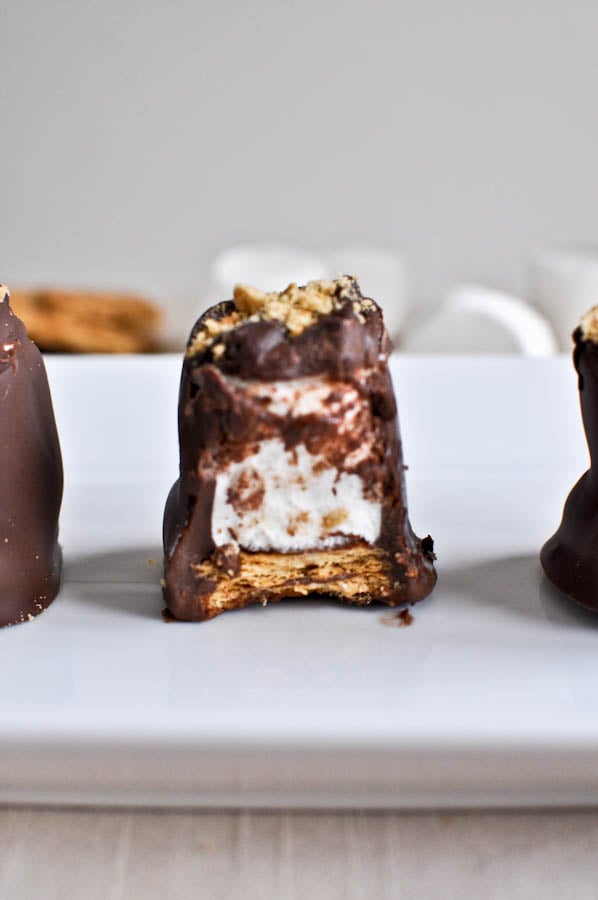 I’m blurry. Don’t mind me. My photographer was too busy chewing.

makes however many you want

Melt a tiny bowl of chocolate to use as “glue.” Melt more chocolate (I used about 1 cup of chocolate chips) in a deep glass or mug to make it easy for dipping.

Break grahams into fours, then cut or snap each slice into squares. Use a dab of chocolate to “glue” the squares together, then add one more dab on top of the top graham and press the marshmallow down. Let sit for 30-60 minutes (or place in the fridge for about 15 if impatient) or until the grahams and marshmallows are “stuck” together. Using a thin fork or long pointy tool (I used a fondue dipped) and press it into the top of the marshmallow gently. Dip it in the chocolate and cover as much as you can. Remove and let set on wax paper, adding more chocolate to the top if you’d like.

I stored mine in the fridge but they are fine at room temperature too!